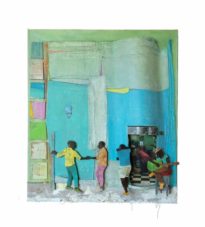 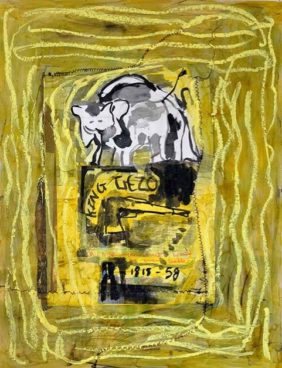 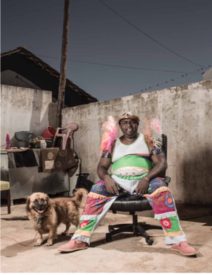 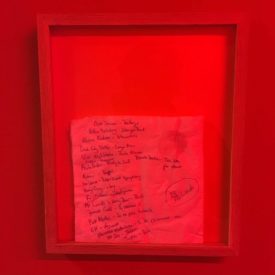 Dear Shaded Viewers,It is not my habit to attend concerts at 11h on a Saturday morning but I was intrigued by the idea that BONNE ESPÉRANCE GALLERY had invited MO LAUDI to curate an exhibition which included a  sound installation with music recorded by Gerard Sekoto at the church adjacent to the gallery, Notre Dame de Bonne Nouvelle. So who you might ask is Gerard Sekoto? GERARD SEKOTO (1913-1993) is one of the most renowned South African artists worldwide. He came to Paris in 1947 under self-imposed exile and died in Nogent-sur-Marne yet his work is only represented in one French public collection (FMAC). SEKOTO is more known for his paintings depicting scenes of daily modern life in South African townships such as The Song of the Pick (1946) in a political way. When SEKOTO came to Paris he struggled a lot and survived by playing music in cafes. To MO LAUDI, the curator of Salon Globalisto, he was an inspiring, fundamental foundation in his life in terms of art. “He’s a bit like Jim Morrison, Picasso in my world.” Says LAUDI.

The curation included the work of KENDELL GEERS. There was a piece in the exhibition by him called Twilight of the Idols. Which is also the title of a book written by Friedrich Nietzsche in 1888 How to Philosophize with a Hammer. GEERS piece is about reappropriation and spirituality, it is wrapped in red tape which means danger. The tape wraps around a sculpture that was considered a God at certain times. KENDELL GEERS came from a working class Afrikaans family born during the apartheid and found himself fighting a crime against humanity on the front lines of activism and protest. His work is in the public collection of Centre Pompidou/MNAM as well as other institutions.Salon Globalisto has a conversation at its core  about returning art that has been stolen from Africa and about appropriation, can Europe give back the money that has been stolen from Africa, can Europe give back all the art that has been stolen from Africa?

MBALI DHLAMINI is a study in current indigenous cultural practices. Her work is a conversation into past and present visual landscapes, it is about Christianity and African spirituality. She is currently based in Johannesburg, South Africa.

NONTSIKELELO VELEKO, born in 1977, is a South African photographer known for her depiction of black identity, urbanisation and fashion in post-apartheid South Africa. LULAMA WOLF MLAMBO is a South African artist based in Johannesburg. She studied fine art and fashion at the University of Johannesburg. Like many artists of her generation, she moves easily between different worlds and techniques, from photography to painting to digital collages. MO LAUDI chose to hang these two together as a contrast, a conversation between sexuality and identity and a questioning of ‘where do I belong’.

GEORGE HALLETT (1942-2020) was a South African photographer known for his documentary photographs of exile, apartheid and the birth of South African democracy. As the official photographer of the Truth and Reconciliation Commission in 1997, he was an essential witness to the political evolution of the country.

DINEO SESHEE BOPAPE explores memory and identity through a socio- political perspective.
Her combinations of images and objects multiply her narratives and viewpoints on society, gender, sexuality and colonial history. The image above of the playlist by DJ MO LAUDI on the napkin is in a collection and was presented at Palais de Tokyo in Paris and the Biennale of Berlin.

RODAN KANE HART focuses primarily on sculpture, but he also works in drawing, photography, video, performance and furniture design. Many of his sculptures explore the physical and historical context of South African urban spaces and how South Africa’s colonial history affects its cityscapes.

Fascinated by the reactions and energy a piece can generate in a space, PORKY HEFER embraces skills and processes that are readily available indigenously, rather than trying to emulate foreign processes.

Born in Congo in 1983, THONTON KABEYA lives and works in Johannesburg. His work reflects the complexity of African contemporary society, in particular the rejection of homosexuality in many parts of Africa, and the unique position of South Africa, a country of exile for many LGBT refugees from across the continent.

Born in 1988 in Johannesburg and raised in Limpopo, KHEHLA CHEPAPE MAKGATO is recognised for his work on the memory of childhood and the great women who made the history of his country. He mixes paint, textures, recycled materials and political messages on his canvases.

One of my favourite art works was the photograph of CHRIS SAUNDERS, Nazinja. Hailing from a background in fashion photography, Paris-based- Johannesburg-born photographer and video director CHRIS SAUNDERS approaches his projects from the standpoint of a visual storyteller. His documentary work investigates the people and environments found in his images, particularly subcultures, local culture crews and artists.

PENNY SIOPIS was born in 1953 in Vryburg, South Africa. Her work pushes the boundaries of disciplines and includes painting, installation and film. Her films are part of major international collections, including the Tate Gallery in London, Centre Pompidou in Paris and the Smithsonian Institute in Washington D.C. These films often are a collage of archival images which create a sense of instability and unpredictability, where form meets formlessness.

CLAUDIA TENNANT is a South African artist who graduated from the Ecole des Beaux-Arts, Paris in 2017. She seeks to explore historical nuances overlayed onto contemporary sensitivities.

SAMMY VALHALLA is a South African artist and psychoanalyst based in Paris. S/he studied art at ENSBA in Paris in the 1980s and at San Francisco Art Institute in the 1990s. She belongs to the second generation of conceptual and feminist artists.

MO LAUDI is an artist, composer, DJ and producer, renowned for his key contributions to Afro-Electronic music. He is the founder of GLOBALISTO, a multidisciplinary platform for events, productions, encounters and debate. His interests lie in the histories and materialities of sound, in post- apartheid transitionalism, mobility and erasure, deconstructing Black futurity, African knowledge systems and spirituality within a global context. Recent multilayered sound installations have been specially commissioned for exhibitions such as Ernest Mancoba. I Shall Dance in a Different Society, Centre Pompidou, Paris (2019), Sammy Baloji’s Johari Brass-Band at the Grand Palais, Paris (2020), Musica, Impulse Centre for Music, Belgium (2021).

MO LAUDI’s work is currently presented in La Clairière d’Eza Boto at the Jardin des plantes in Rouen and in July at the Fondation Martell in Cognac and Hypnosis at Parliament, Paris. He is preparing a solo show at The Fourth in Cape Town.
More information on : https://soundcloud.com/the-mo- laudi-project

BONNE ESPÉRANCE Gallery is an invitation to discover the creative exuberance of South Africa. Located in the centre of Paris, at 3 rue Notre Dame de Bonne Nouvelle in the 2nd arrondissement, the gallery exhibits both emerging and established artists working in the fields of art, design and craft. From Cape Town to Johannesburg, Durban to Pretoria, BONNE ESPÉRANCE is a dive into the creative geography of South Africa and its neighboring countries, Lesotho, Swaziland, Botswana and Namibia. Open to the curious, to amateurs and to collectors, BONNE ESPÉRANCE Gallery gives a new voice to an art scene that is unique on the African continent for its originality, diversity and openness to the world. Founded by Scott Billy and Kari Smith, the gallery offers regular programming showing new and established artists, designers and craftspeople, with exhibits often created by the artists themselves to showcase links between different artists’ work.