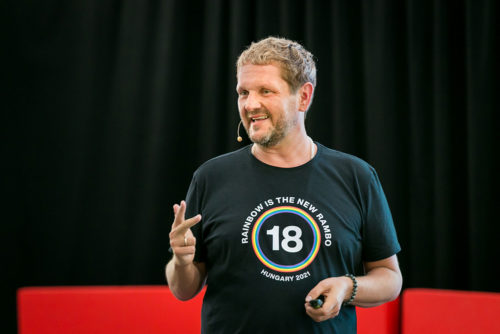 The Hungarian LGBTQ+ Community is
under major attack from their government and need your help by
shining a light on this atrocity. It is a dire situation, even Tilda
Swinton has addressed the issue. 💔

“I am a Hungarian stylist, blogger and media personality, the art
director of InStyle Hungary, and I have designed a special T-shirt
collection to collect donations for a Hungarian civil society (Háttér
Társaság – https://hatter.hu/) to support LGBTQ+ rights protection.
The T-shirts has already been worn by many Hungarian celebrities and
influencers, we have started to send them out to international
friends, and we would appreciate any help from you in this campaign.” Mark Lakatos.

A controversial law puts together measures against  pedophiles with LGBTQ+ issues went into effect
in Hungary, despite protests across the EU.  It basically bans any type of communication, education or LGBTQ+ visibility to
youth, under the age of 18:
https://www.theguardian.com/books/2021/jul/08/hungary-fines-bookshop-chain-over-picture-book-depicting-lgbt-families

“We would like to raise awareness and gain international media attention, as it is a law even stricter than the Russian LGBTQ+
propaganda laws. Throughout Europe the homophobic attacks against LGBTQ+ people are on
the rise, it is not just a Hungarian problem. This is a call for help against hate.

You can support the campaign and their fundraising effort for Háttér Society (working on LGTBQ+ issues since 1995) by promoting their
website, where anyone can buy T-shirts with international shipping:  http://www.adultcontent.hu/en/
(the site name is a joke on the law)