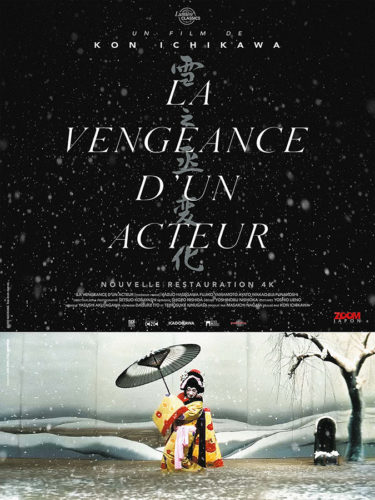 An Actor’s Revenge is a remake of a triptych of films that were made in the 1930’s by Keinosuke Kinugasa, future winner of the Grand Prix at the 1954 Cannes Film Festival with The Gates of Hell, which already starred the great actor Kazuo Hasegawa. The 1963 remake is a very stylised high drama that goes between tradition and modernity.  The plot goes that Yukinojo,  a celebrated kabuki actor,  comes back to Edo with the troupe and in the audience he sees the three men that caused the ruination of his father, the magistrate Dobe and the merchants Kawaguchiya and Hiromiya,  which ended up in the suicide of both his mother and father. He was seven years old at that time and his name was Yukitaro. He changed it to Yukinojo when he grew up and became an onnagata. An onnagata is a role of a woman played by a man complete with the physical representation of femininity as well as the gestures of femininity. The onnagata remains in the part even when he/she is off stage.

At the time of the tragedy, he vowed to avenge the murders at any cost. Yukinojo intends to keep his promise and to do this he will use Dobe’s daughter, Lady Namiji, who has fallen in love with the actor… Watching the film you believe that the actor is a woman as Yukinojo never leaves ‘her’ stage costume even when behaving like a man.

The film is divided between theatrical minimalism and realistic representation. The director’s genius consists in playing on the mixture of genres, between Kabuki theatre of the past and the Japanese cinema of the present. The sets are minimal and you are never quite sure if you are watching a play or reality. Like his onnagata hero, who plays a woman’s role both on stage and in the private sphere, Kon Ichikawa breaks down the boundary between theatre and reality with The Revenge of an Actor. Presented in its splendid 4K restoration, his film is a breathtaking reflection on the way art infuses life.

Yukitaro brings about the deaths of the three men responsible for the suicide of Yukitaro’s parents however in the process an innocent woman, the daughter of the magistrate Dobe,  who was part of his schemes, dies.  He is overcome by her death and retires from the stage and disappears.

“The other day, someone told me that I had made more than 70 films. […] Only half of them came from me. The others were brought to me by producers or others. The difficulty has always been to appropriate a script and make it your own. That’s the battle I’ve always fought. “Kon IchIKawa

KAZUO HASEGAWA
Unforgettable performer of both versions of Revenge of an Actor, playing both the role of the onnagata actor Yukinojo and the “Robin Hood” Yamitaro, Kazuo Hasegawa is the greatest Japanese jidai-geki star of the pre- and post-war period. In these “period films” set in pre-Meiji Japan (before 1868), the actor stands out both for his swordplay and for his strong control of his image, justifying his exceptional popularity in the country. In 1937, Kazuo Hasegawa left Shochiku for Toho: he was then the victim of an attack by unknown men who slashed his left cheek – probably a reaction to this change of studio, experienced as a betrayal in the profession. With this new start, his acting evolved, his range of roles expanded, even if it often remained in the service of jidai-geki. Kazuo Hasegawa’s career includes more than three hundred films: he works with the best directors of the time, such as Teinosuke Kinugasa (The 47 Ronins, The
Gate of Hell), Mikio Naruse (Tsuruhachi and Tsurujiro, The Path of Drama) and Kenji Mizoguchi (The Crucified Lovers). Kon Ichikawa’s Revenge of an Actor is his penultimate
as an actor, as Hasegawa did not wish to show his age in front of his public. He then developed his activities in television and theatre. He died in 1984, and was the first actor to be posthumously awarded the Nation’s Prize of Honour.

CINEMASCOPE AND ME” BY KON ICHIKAWA
“It had been thirty years since I saw my first film, Charlie Chaplin’s The Kid, and I had come to consider that this format [a little wider than a square] was
the norm. During the decade I worked as an assistant director, my approach to light/shadow interaction was shaped by these dimensions – my ‘artistic approach’ was formed within these boundaries. Nothing changed once I became a director. Day after day, from morning to night, I looked for the best way to use this predetermined space. It was this material that shaped my skills, it was the window through which I observed humanity. Suddenly, new windows appeared to the left and right of the original, and it was up to me to learn how to connect them.
them. The way I perceived the world had to be changed, and quickly. I would have to practice a lot before I could understand how beauty worked in this new stretched format. To be honest, I found the idea quite disturbing. […] In the end, CinemaScope has totally convinced me. There is something in this screen that stretches from one end of the scene to the other
the scene that makes watching a film strangely pleasant, even if it turns out to be rather mediocre. In fact, thanks to this format, I was able to regain the feeling of being part of the audience,
something I had lost in all the years I had been in the business. The egocentric concerns of the director – artistic ambition, investigative spirit, etc. – The second my eyes fell on this sprawling monstrosity, the director’s egocentric preoccupations, artistic ambition, investigative spirit, etc., were shattered. I was amazed again, like a little boy. That’s why I love CinemaScope, there’s no doubt about it. I think it’s a physiological reaction. ”

Extract from an article published in the magazine Eiga geijutsu in November 1955.
In it, Kon Ichikawa recounts his first experience with the anamorphic wide format on the film Men of Tohoku (Daiei Scope, but the director refers to it under the more generic term “CinemaScope”).