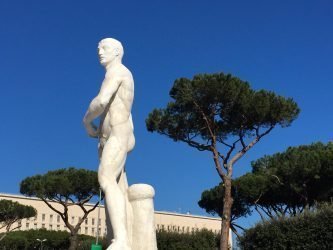 I know it’s mind-boggling, but despite all of my trips to Rome, I’d never been to the Foro Italico—Mussolini’s sports stadium—to admire the notoriously homoerotic male athlete statues who live there. But on this trip to the città eterna, I was visited by my long-lost pal Mark Simpson, who, as I’m sure you know, coined the terms “Metrosexual” and “Sporno” among many other accomplishments. And since the exquisitely muscular statues of Foro Italico are the ultimate totems of Sporno, a visit there with Mark was mandatory. (Stay tuned for my upcoming interview with Mark on A Shaded View, which was conducted beneath the firm buttocks of these Olympic gods.)

Foro Italico, formerly Foro Mussolini, is a sports complex designed by Enrico Del Debbio and Luigi Moretti and built between 1928 and 1938. The 60 marble statues were created by Aldo Buttini, Silvio D’Antino, Eugenio Baroni, Aroldo Bellini, Bernard Moresakchi and others. The complex and especially the statues are considered icons of Fascist design by modernism devotees, myself included.

Fascist architecture, regarded with blasé indifference by Italians and greeted with contentious tongue-clucking by politically correct British and American journalists, is once again being examined and debated. Luxury fashion brand Fendi recently spent millions renovating the Palazzo della Civiltà Italiana—known colloquially as Mussolini’s “square coliseum”—and has established it as their new Rome headquarters. I’ve always been a rather big fan of this big, striking hunk of cement Swiss cheese and wrote about it on this blog a few years ago.

The “square coliseum” has made a few noteworthy appearances in cinema: Vincent Price stumbles down its steps in the post-apocalyptic future of The Last Man on Earth and as Fellini’s miniature model for Anita Ekberg to stomp past ala Attack of the 50-Foot Woman in the director’s segment for Boccaccio ’70. It also had a recent and un-noteworthy cameo in, as Leonard Maltin succinctly put it, the “puerile and unfunny” Zoolander 2.

While I applaud Fendi’s epic spit-polish of one of Mussolini’s most famous gestures of deluded grandeur, I generally prefer my Fascism to be of the faded variety, as when I first visited the Palazzo della Civiltà Italiana in 2001: weed-strewn and melancholic; lovers canoodling clandestinely behind the patina-ed neo-classical statues. If I had a pick a favorite show venue at AltaRoma, the fashion event I attend twice a year, it might be the Palazzo dei Congressi, with its weathered, time-worn façade and magnificent mural by Futurist artist Gino Severini.

And now, before you start to think that I’m suffering from a palsied libido, let’s turn back to my recent blue-sky-blessed photos of those delicious, ass-tastic marble athletes in the Foro Italico. In the words of my favorite tranny hero, Dr. Frank-N-Furter:

“He’ll do press-ups and chin-ups
Do the snatch, clean, and jerk
He thinks dynamic tension
Must be hard work
Such strenuous living
I just don’t understand
When in just seven days
Oh, baby
I can make you a man” 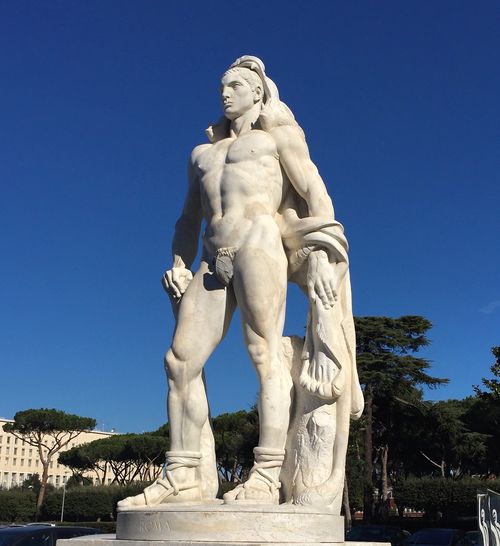 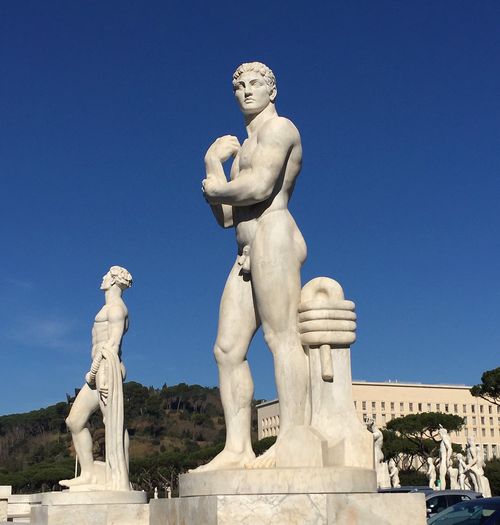 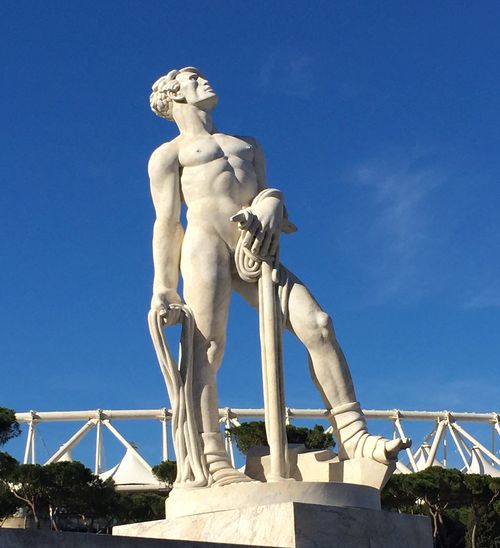 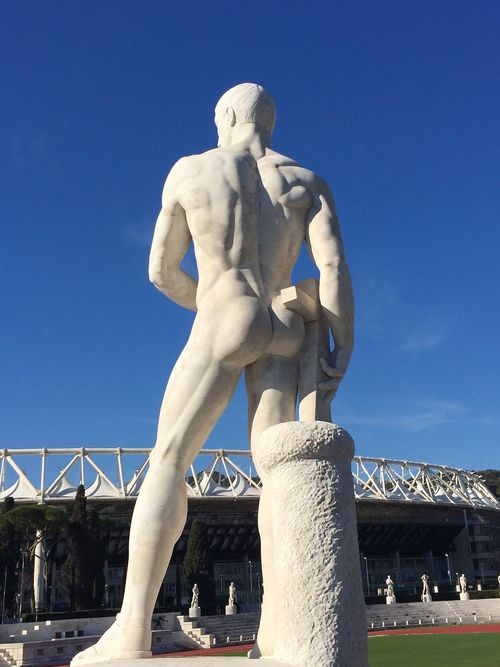 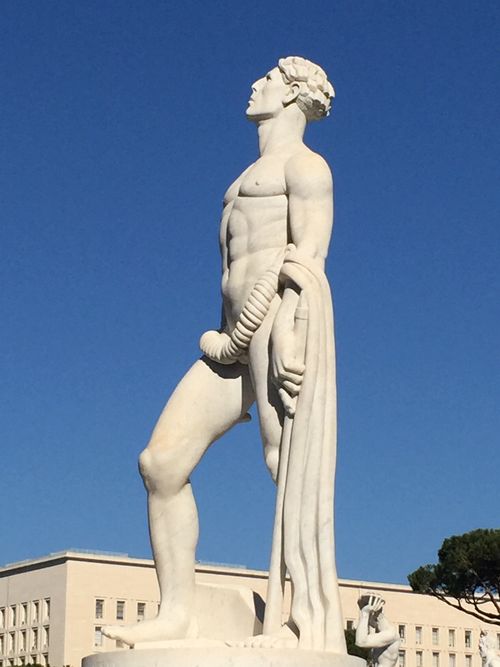 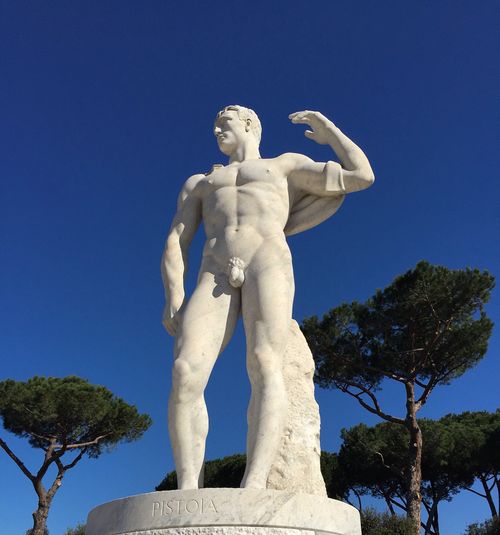 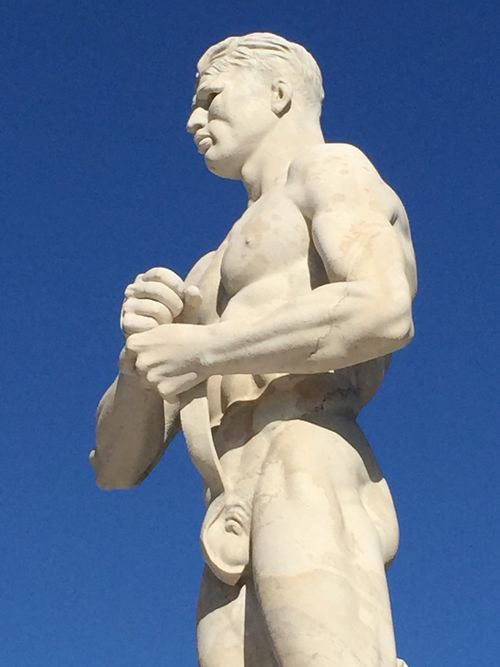 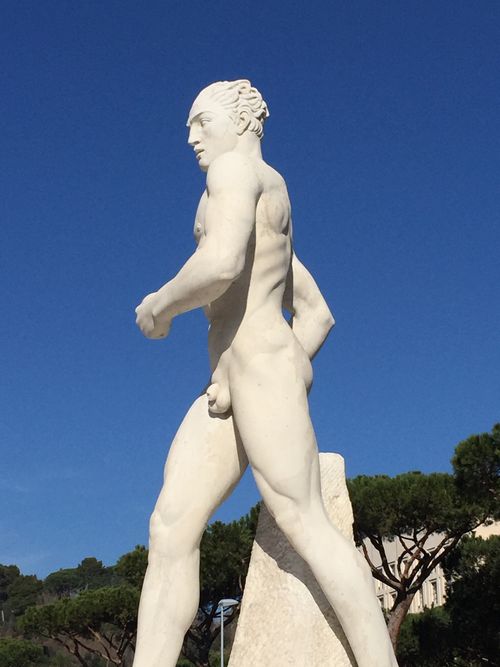 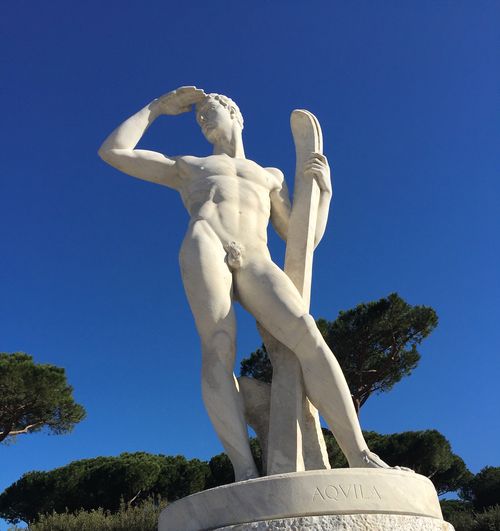 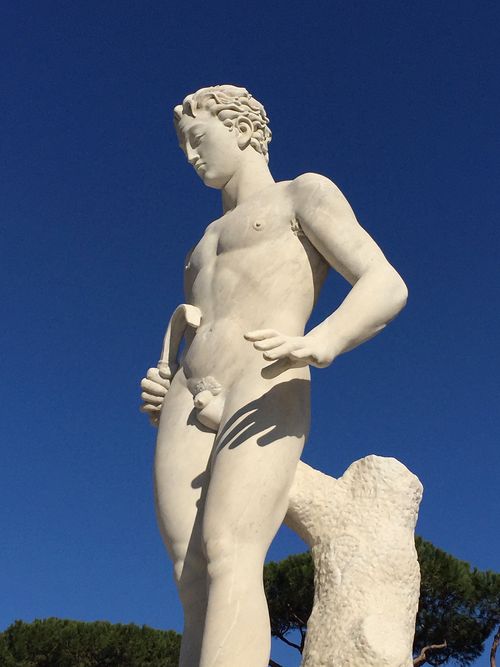 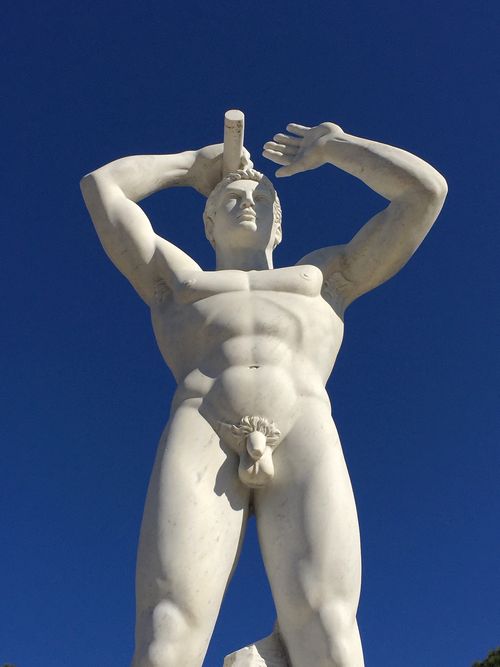 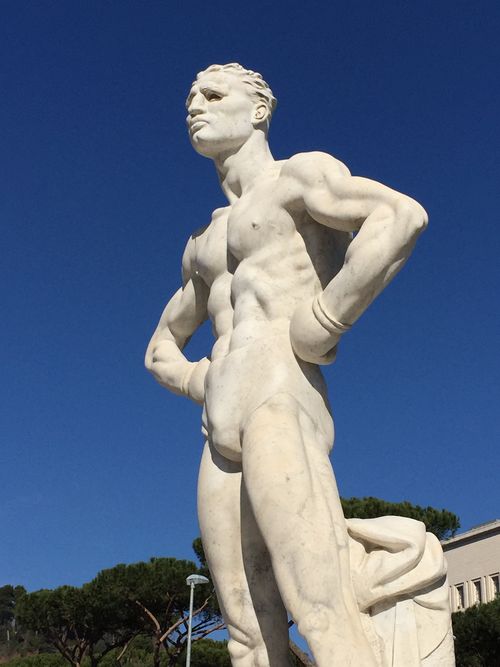 My favorite statue, and probably the stadium’s most famous, is this sizzling hot boxer. 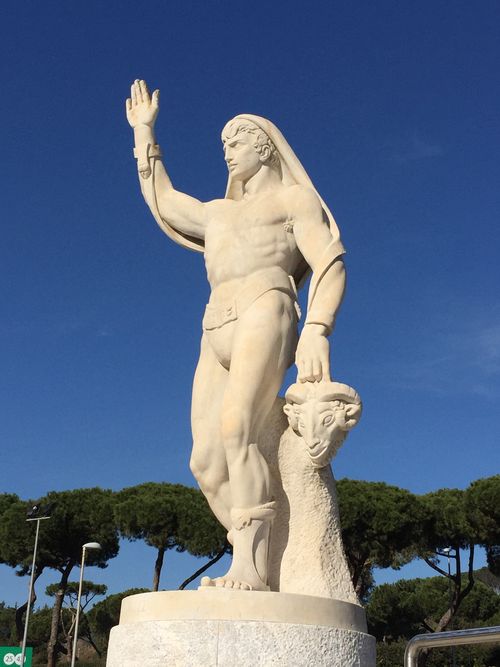 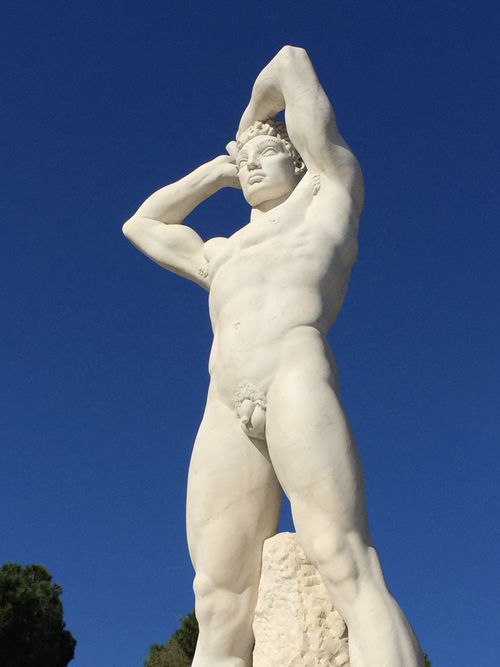 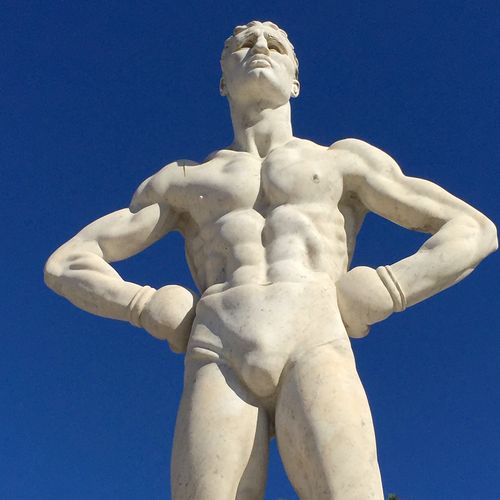 Another view of my boxer husband. 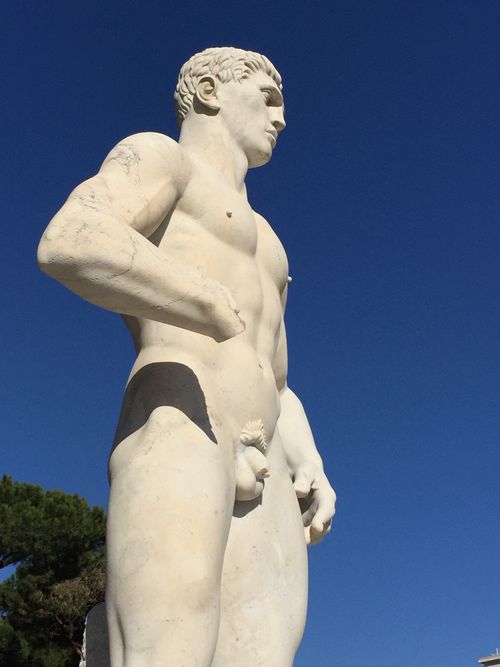 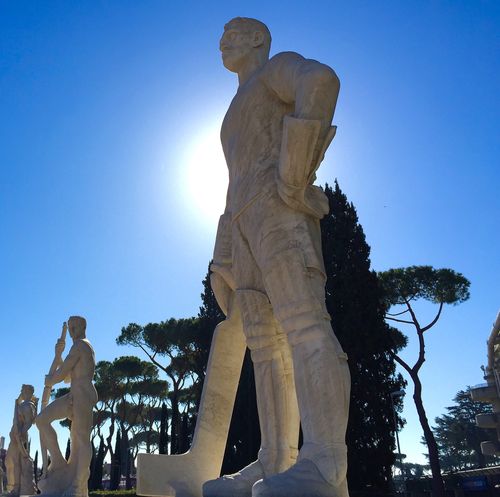 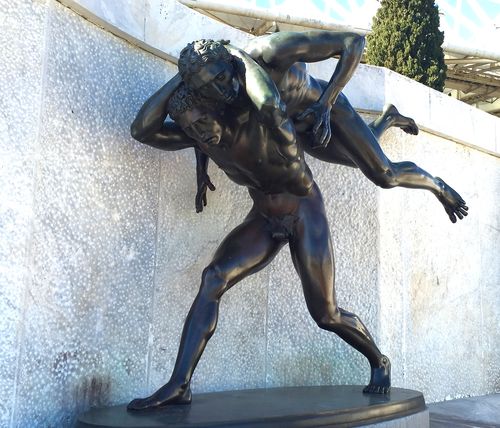 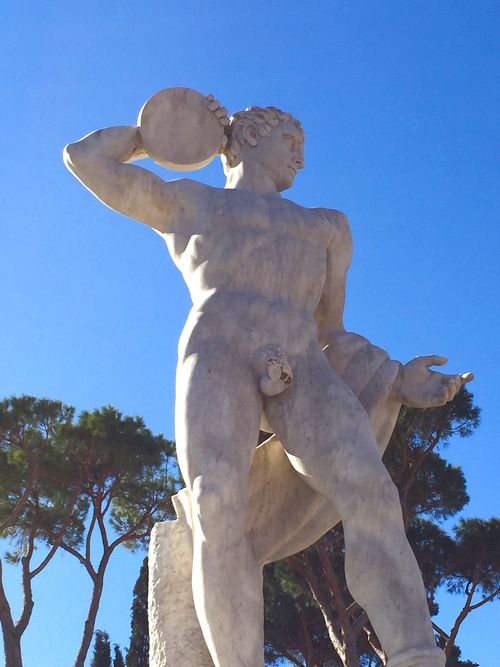 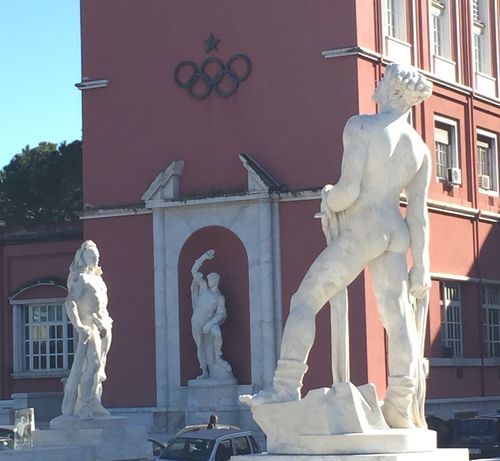 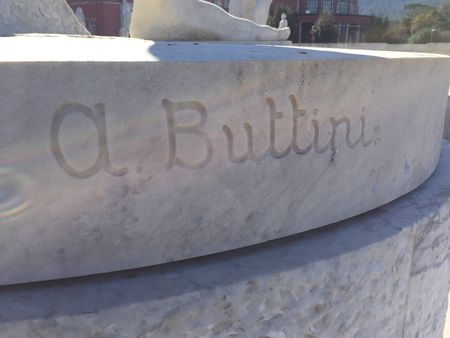 Mark got a big kick out of the name of one of the sculptors.