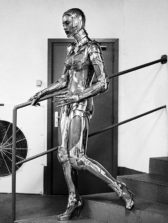 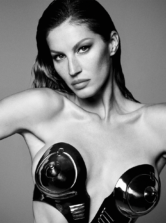 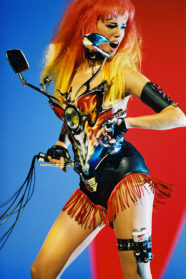 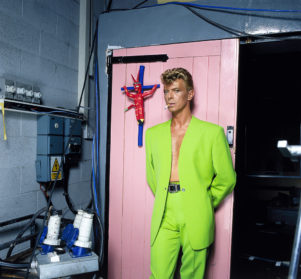 «Thierry Mugler : Couturissime », was originally designed and produced by the Montreal Museum of Fine Arts and ever since we’ve been waiting for it to arrive in Paris where it most naturally belongs. The exhibition retraces the of the designer Thierry Mugler who revolutionized  fashion, haute couture and made one of the best selling perfumes. In between Montreal there was Mugler Follies complete with dancers, acrobats, singers, models and actors.  The exhibition will include archives dating back to 1973 to 2014  and will exhibit silhouettes and accessories for both the ready-to-wear and the haute couture as well a stage costumes, photographs, you know of course Mugler is an excellent photographer and used to shoot his campaigns. The scenography by the MBAM, Thierry-Maxime Loriot, will include digital performances by players from the world of entertainment and audiovisual arts. This will not be a classic retrospective, it is part of the life and energy of Thierry Mugler and Manfred, which is how he identifies now.

From the 1970s until 2002 Thierry Mugler was the image of the 80’s with his graphic silhouette and in the 90’s he contributed strongly to the renaissance of haute couture. I was fortunate enough to pay witness to some of the most spectacular fashion shows that are branded in my memory. “Thierry Mugler: Couturissime”, organised in several acts, like an opera, combines thematically mixes costumes, animated projections, photographs
and music, creating atmospheres that embody the various projects in which the artist has been involved since the late 1970s. The exhibition will take place on two levels, opening  with an evocation of
Mugler’s fantastic bestiary, from microfauna to the depths of the sea, with an emphasis on excess: futuristic silhouettes with pointed shoulder pads, abysmal necklines, unreal wasp
waists…  think of Violeta Sanchez in the insect couture. Two exceptional silhouettes from the Insects and Chimeras collections (1997/1998) vividly illustrate this section. A sheath with a black velvet train, decorated with butterfly
wings by Lemarié and a “creature” articulated with iridescent scales embroidered with crystals, fancy diamonds, feathers and horsehair, are now absolute masterpieces of couture.
Nymphs dressed in notched glass shell bustiers and extravagant organza jellyfish seem to move twenty thousand leagues under the sea. This animal and aquatic world is succeeded by science fiction comic book super heroines,
industrial design and futuristic automobiles, all iconic and unforgettable and when you look at the shoulders of today’s collection one cannot not be reminded of Thierry Mugler. In that vain there are the robotic creatures made out of innovative materials which seem to have anticipated the revolutions of transhumanism. The artist has humorously designed removable or “convertible” sheaths, “bumper” bustiers and “radiator” belts. One can only admire his Maschinenmensch, unveiled in 1995 for the 20th anniversary of his company: a fully articulated robotic armour that required no less than six months of intensive work. Apart from fashion design, Thierry Mugler has distinguished himself in the field of perfumery with the creation, in 1992, of Angel, an olfactory revolution that launched the trend of gourmet perfumes. A room staged by the artist completes this section by evoking the world of scents imagined by the designer, which have always been synonymous for him with infinity and dream.

On the second floor onwards the exhibition devotes itself to the medium of photography. This is where you will find rare prints by artists and fashion photographers including Guy Bourdin, Jean-Paul Goude, Karl Lagerfeld, Dominique Issermann, David LaChapelle, Luigi & Iango, Sarah Moon, Pierre and Gilles, Paolo Roversi, Herb Ritts and Ellen von Unwerth as well as the fruitful collaboration between Thierry Mugler and photographer Helmut Newton.
One room is dedicated to the photographic achievements of Mugler himself,  who, from 1976 onwards, began shooting his own visual campaigns playing with the glamour and beauty of his muses from Jerry Hall to Iman and shot in extreme locations from Greenland to the Sahara and the unforgettable photos shot on the roofs of the Paris Opera.

In 1985 Mugler designed costumes for Macbeth, a play presented by the Comédie-Française troupe at the Avignon Festival. The costume for the character of the first witch, sketches displayed on the wall and a multimedia installation by Michel Lemieux (4D Art) are just a few examples of the elements that transport us into this powerfully tragic Shakespearean world. “Thierry Mugler, Couturissime” is an opportunity to discover and rediscover this total artist, who was in turn a dancer, a performer, a photographer,  a designer, and a futurist. Thank you Musée des Arts Décoratifs for bringing the master home to Paris.