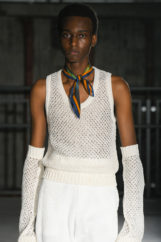 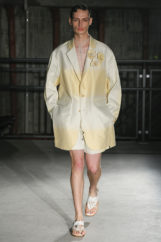 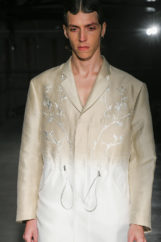 TAAKK, the brand is about elegant menswear created by Takuya Morikawa’s desire to work from the bottom up creating dynamic textiles that reflect the earth in fact he calls the collection “Dance with Earth”. He worked at Issey Miyake, and built his label in Japan. I believe we met in Tokyo years ago and I was as impressed then as I am now about his sensibility and the soul that one finds in his creations. The film is more about the process rather than creating a fashion film per se. It is about his world and his vision. Jackets seamlessly turn into shirts, patterns express the colours of nature with serenity and an emphasis on the textiles.

“Structures and landscape created by Earth are majestic and intricate, and gives us the illusion that perhaps each one of them was made with intention. If Earth was to be considered an artist, she would be the greatest and most creative existence.

The mystical landscape where the rippling waves hit the shoreline and the forest blend and disappear beautifully is expressed through layers in a linen jacket with a print of beautiful flowers that are both strong and transient, and this gradually changes into a shirt to propose a new style that has never been seen before.”

The majestic workings of Earth seem to Morikawa like mutations, and led to the urge to create a collection where things that normally should not mix coexist in one, and made it possible to develop materials that no one has ever touched before.

Created with inspiration drawn from Earth, this collection has technical fabric, which is what TAAKK truly excels at, and powerful graphics.

TAAKK was established in 2013 in Tokyo, Japan by award-winning designer, Takuya Morikawa. Following an eight-year tenure at ISSEY MIYAKE, Morikawa’s unique point of view to design and fabric innovation has earned the brand numerous accolades including:

Fashion Prize of Tokyo in 2019, (awarded by the Tokyo Metropolitan Government and the Japan Apparel Fashion Industry Council (JAFI).