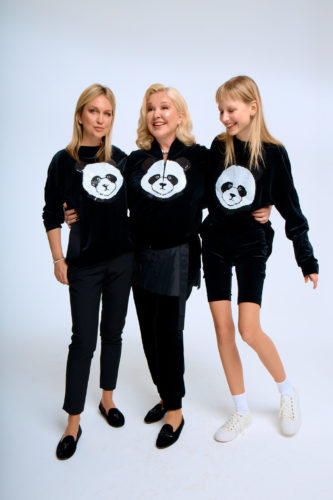 La Maison YANINA, known for its Couture creations now they have launched their  Panda Collection, composed of Activewear looks. The Capsule was imagined by the House as a protective cocoon, as soft and tender as a panda. Having a wonderful stretch velvet bomber, I can attest to the comfort and the look. The idea is to celebrate animals and nature and to give ten percent of the profit to IFAW, which is an organisation dedicated to helping both wild and domestic animals. IFAW provides practical solutions to preserve animal species and their habitats in the long term. It is internationally coordinated and works to encourage respect for animals and to influence national and international species protection policies. “Weaving our ties with nature and IFAW is a natural fit for Yanina House for a Better World,” says Yulia Yanina, Founder of Yanina House.

The collection consists of cycling shorts, trousers, a bomber and two sweatshirts all made in soft and light stretch velvet. The bomber and sweatshirts feature a panda embroidered with black and white sequins or topped with a small feather, YANINA’S signature.

“IFAW’s work is fueled by human connections. When people like Yulia Yanina bring their expertise, creativity and platform to IFAW’s advocacy, real change happens. We are very grateful to be the beneficiaries of 10% of the sales of the Panda Capsule. With Houses like Yanina Demi Couture, we are creating a world where animals and people thrive together,” said Stacie Paxton Cobos, IFAW Vice President of Marketing & Communications.

The collection, which is part of the Demi Couture line, is available now for between €85 and €300 on Yanina Demi Couture.