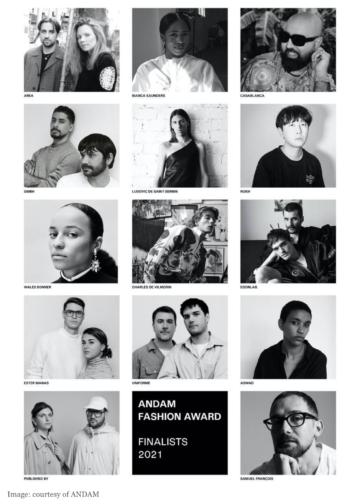 Along with the LVMH prize ANDAM is the most prestigious fashion competition in France. The award is about  celebrating young talent and  is open to any nationality as long as their business is established in France or is willing to establish their business in France. There are seven nominees for the Grand Prize: New York-based Area, Bianca Saunders, Casablanca founded by Charaf Tajer, Paris-based designer Ludovic de Saint Sernin, Rokh by Rok Hwang, Wales Bonner and Berlin-based GmbH, from design duo Serhat Işık and Benjamin A. Huseby, who were recently named creative directors of Trussard. Among the nominees Grace Wales Bonner won the LVMH prize in 2016.

There are four finalists for the Pierre  Bergé prize – Charles de Vilmorin, who was named creative director of Rochas earlier this year, alongside EgonLab, Ester Manas, and Uniforme Paris. The award aims to reward a French company with 100,000 euros to give the brand the “means to grow and reach an international audience”.

In addition there is an Accessories Prize, worth 50,000 euros and for that there are 3 finalists: Paris-based leather goods maker Aswad founded by Sonia Ahmimou, Parisian jeweller Samuel François and Austria’s Published By.

ANDAM was founded by Natalie Dufour in 1989. Cédric Charbit, chief executive and president of Balenciaga and mentor of the 2021 ANDAM fashion award’s winner said: “The 2021 edition ANDAM finalists are each highly qualified, and I would like to take this opportunity to thank the jury for a strong and aligned selection. Together with the jury, we wished to expand the quantity of finalists in order to make this edition a platform for recognising and promoting of a greater number of talents.”

The winners of the 2021 edition will be selected on July 1.