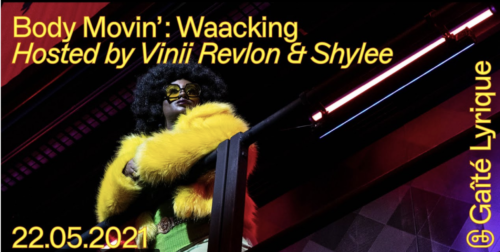 Waacking originated in the 1970s in the LGBT+ clubs of the black and afrolatino community, but even then everyone was dancing it!

The name “waacking” comes from the onomatopoeia “whack” and refers to the sound of a slap. It evokes rejection. Because this dance is above all a way of asserting one’s difference, one’s extravagance, and of using it as a weapon. Created at the end of the 1960s, waacking is a subtle mix of acting, technique, groove and attitude. And need we say it? Waacking is normally danced to disco music, although today it is practiced to all kinds of music. Waacking can be found in clubs, in dance battles, in video clips, in fashion… because yes, waacking has its place everywhere.

Dancer, choreographer and stylist, Mariana Benenge is a free spirit in the Parisian queer community. When she’s not dancing on the stage of the Opéra Bastille, the young woman shares the funky and colourful creations of her clothing brand on social networks.

Dancing is a family affair for Mounia: initiated by her breakeur brother, she tried her hand at different styles before becoming passionate about waacking and joining the House of Revlon. She also acted in Gaspard Noé’s Climax and modeled for Jean-Paul Gaultier.

Boubou is an internationally recognised multidisciplinary dancer (Step Ya Step Ya Game Up 2019, All Europe Waacking Festival 2020…). He is a member of the Les Sancho crew and was seen in the final of the show La France a un incroyable talent.