In a world where the access to fashion and information have become fairly democratised, it is not surprising that clothing has transcended the type of information that it carries. Clothing with a political message as a print is nothing new, but the fact that designer clothes, usually reserved to a quiet elite, has now joined the lines of carrying important political messages  definitely is something we will start seeing more of.

Within that reality designers Katharine Hamnett and Patrick McDowell decided to collaborate to create a collection titled ‘HELP’, to express the despair caused by Brexit to the British fashion industry. Apparently, new complications regarding VAT and customs procedures to trade with European countries seem to be the biggest struggles faced by (mostly) small businesses. I actually found quite a few articles about it, in a couple of these articles,Katharine Hamnett has been quoted, which is a reflection of her true, deep involvement in the topic, then again Katharine Hamnett has always been political.

London had been growing its promotional force through London Fashion Week in the past few years. Now, barely anyone in fashion talks about the London presentations, apart from Burberry, Vivienne Westwood and a few cool new names, of course. I wonder how much of this is due to the British political situation. After all, it’s true that most of London’s fashion appeal comes from small designers, who -as I said before- are the ones suffering the most from Brexit.

About the HELP collection by Katharine Hamnett and Patrick McDowell, the pieces are actually cool. If I may get frivolous for a second here, I must say that, Brexit supporter or not, those big HELP printed jackets are ‘big mood’. The collection is entirely made out of upcycled garments from past Katharine Hamnett  collections and reimagined and worked with London based creators and printers.

The collection will be available on www.katharinehamnett.com from the 14th of May 2021, in limited quantities. 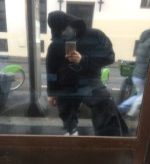