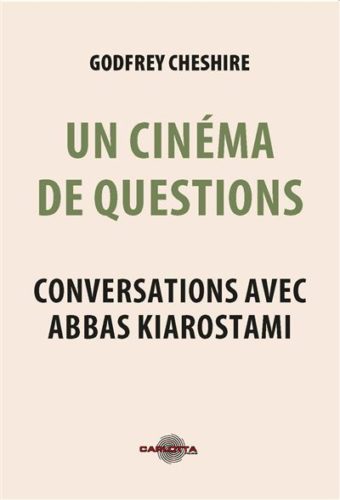 I fell under the spell of Abbas Kiarostami when I saw The Koker Trilogy. “Ou est la maison de mon ami” (Where’s My Friend’s House?) 1987, Et la vie continue (1991) and Au travers des oliviers (1994). They are three different stories in the same village, Koker, in northern Iran. Like most of the feature films by Kiarostami, it is a simple story, Ahmad, an 8 year old boy, by accident  took home the notebook of his friend. If his friend does not have his notebook the next day he will be expelled from school.  The story is very simple and the suspense of the film operates till the end as lived through the eyes of the 8 year old boy. The landscapes play an important role in all Kiarostami’s films as does friendship and the sense of responsibility and duty. His actors are non-professionals and he plays tricks on them to get the emotions out of them that he needs for the films. The book ‘Un Cinema de Questions  Conversations Avec Abbas Kiarostami’ contains a series of interviews with Abbas Kiarostami by the film critic Godfrey Cheshire which took place during the 90’s. The book covers his entire career from his early works, unseen before their recent restoration, to all the masterpieces such as the Koker Trilogy (Where’s My Friend’s House? And Life Goes On and Through the Olive Trees), Close-Up, The Taste of Cherry and The Wind Will Carry Us Away.

In 1959 Kiarostami studied painting and that is what he concentrated on for 13 years, he had no intention to become a feature film director. He worked as a graphic designer and made spots for advertising as well as publishing children’s books. He has never considered himself to be a cinephile and in fact there are not that many films that he likes.

Thanks to Carlotta and Mk2 there will be a Abbas Kiarostami Retrospective of 10 films and 7 short films that are newly restored. Some of the films have never been seen before. The first part of the retrospective includes The Koker trilogy which I spoke about in the beginning of this article. The second part is Views on Childhood and includes  films that have rarely if ever been seen: Le Costume de Mariage (1976), Le Pain et La Rue 1970 , a short film, The Choir 1982, a short film, Le Passager 1974, Le Recreation 1972, a short film, Experience 1973, The Third part is Views on School: Les Eleves Du Cours Preparatoire 1980, Deux Solutions Pour Un Problem 1975, a short film, Devoirs Du Soir (Homework) 1989 this film I saw and loved, Kiarostami asks young students in front of the camera about their life after school, homework and cartoons, and two other short films: Hommage Aux Professeurs 1977  and Moi Aussi, Je Peux 1975.

Martin Scorese had this to say: “Abbas Kiarostami represents the highest level of art in cinema.”

Conversations with Abbas Kiarostami takes us to the heart of his creative genius. The book looks back film by film and in the end is a beautiful lesson in cinema.