Instagram, like most social media apps, is way too polluted with advertisements. Anyone can sponsor a post. I once crossed  a selfie by a random user which was sponsored on Instagram. He was not  there for business, it was obvious! More and more, our eyes get conditioned to automatically ignore anything labeled  “sponsored” on the social media platform. It’s in this context, that I recently scrolled by Antidote Studios’ campaign; the campaign promoting their newly launched bag, baptised “Kiss Kiss”. This time I stopped, I was intrigued, I was thankful that this appeared in front of my eyes, I swiped to see the rest of the pictures backwards and forwards, trying to understand, trying to let my brain learn why these images were so perfect, so beautiful. Is it the lighting? Is it the styling? Is it Ichon? I still don’t know… But I continued to observe. I might have even found some of the posters of the campaign in the streets of Paris and tagged them with the imagery of my own artistic practice, maybe, the mystery is yet to be solved. 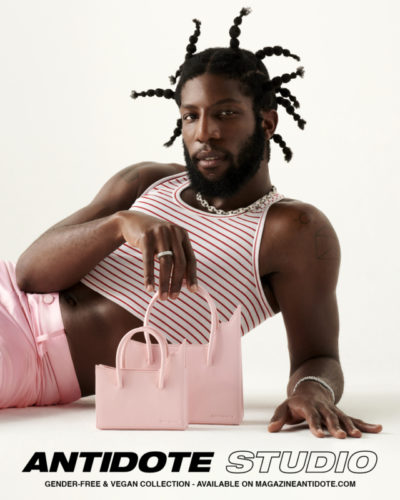 As I remained intrigued by these images, I couldn’t help but want to know more about Ichon. He is a French rapper, that I know for sure. He curates his career impeccably, his video clips, music, his image, his social service, it is just absolute flawlessness. I personally discovered him last year through the “Pointless” video clip where he is featured. It is a must-watch.

Ichon, born Yann-Wilfred Bella Ola (Who has such a beautiful name?) was born in Montreuil, Seine-Saint-Denis, a suburb just outside the Paris périphérique.  Born under the sign of Virgo,  September 11th 1990, which starts to explain the deep care he manifests through his own artistic creation and equally careful choice of modeling jobs. He is part of the music group “Bon Gamin”, composed by himself and french rap icons Myth Syzer and Loveni. Love, in its most romantic of manifestations, is one of the central themes of Ichon’s music. He plays with literary figures derived from poetry in the writing of his own lyrics, an evolution of the little boy who wrote love letters at a very early age like he understood it, love.

Some of his major projects include: “Cyclique”, followed by #FDP his first mixtape, and his first album “Il sufit de le faire” (Is is enough to do so)  launched on November 24th 2017. His latest album entitled “Pour de vrai” was launched  in 2020, on the day of his birthday. I am really looking forward to see the evolution of both, Ichon and the new Kiss Kiss bag by Antidote Studios. 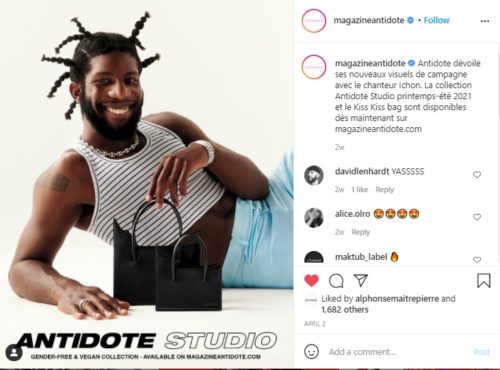 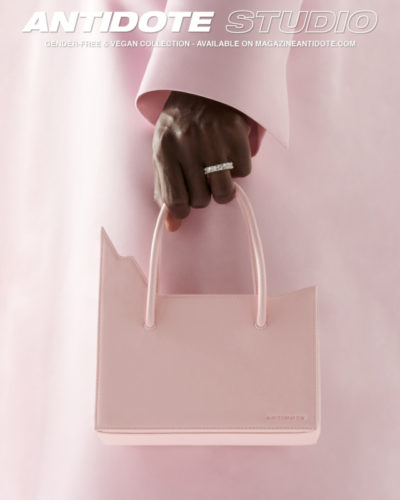