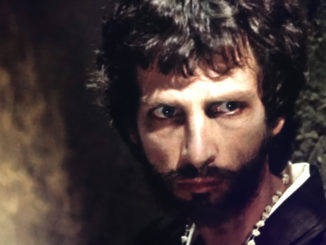 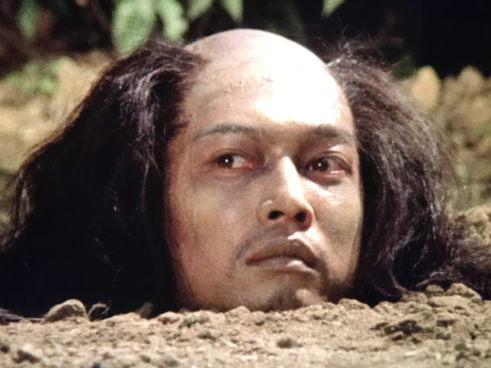 In 2016 Martin Scorsese made his own adaptation of this film shedding some light on the original film by Masahiro Shinoda that was inspired by the famous novel by Shusaku Endo. Shinoda is a New Wave Japanese director and the film sheds a light on religion and belief. The story turns around two Jesuit priests Rodrigues and Garrpe who in 1639 go to find their mentor Ferreira who had disappeared in the archipelago. The book originally was adapted for the cinema with The Twenty-Six Martyrs of Japan in 1931. Martin Scorsese’s version starred Adam Driver and Andrew Garfield. I must admit I have not seen Scorsese’s version of this film but will look for it just by curiosity. From what I’ve read Scorsese’s adaptation has the American seeking solitude, isolating his actors as much as possible in vast, green panoramas and filmed in Cinemascope. Shinoda’s film traps his characters within the frame and the sky and horizon slowly disappear suffocating the protagonists. We are sucked into the abyss of their souls and the impossible choice one is forced to make. Back to the story, at the time the two Jesuit priests arrive in Japan the Christian religion was banned because of a fear of Western influence brought by a faith that was not theirs. Christian converts in Japan were killed and tortured if they did not renounce Christ. The 17th century two Portuguese Jesuit priests aimed to re-implant Christianity in a country where the Catholic religion was banned. In addition to trying to reimplant Christianity in Japan they were trying to discover the truth about their mentor Father Ferreira who had been captured by the authorities five years prior. The two travel from China to Japan and are surprised with their warm welcome, The villagers hide and protect the two Jesuit priests and for that they are taken prisoners and tortured but still will not renounce their faith. The man that smuggled the two from China to Japan, Kichijiro, had his family slaughtered for being Christians. He attaches himself to Rodrigo who just wants to be left alone. There was an award of 300 pieces of silver for the capture of the priests. Kichijiro plays Judas Iscariot and reveals the priest and when the Inoue men imprison Rodrigo, Kichijiro is overwhelmed with guilt and gives away the money to a prostitute. Imprisoned Rodrigo and the other prisoners see outside the prison window the torture of a Christian Samurai family and hear the groans of tortured Japanese Christians being tortured for not renouncing Christianity which consists of stepping on the face of the Virgin Mary, a silver icon. Inoue and Rodrigo do not see things in the same light, Rodrigo is told the Church is not wanted in Japan and in the end they both accuse the other of ignorance. In the end the Inoue concludes that although Christianity is not bad, he forbids it.

If Rodrigo will not renounce his faith all of the Christian farmers will be hunted down and and tortured and drowned. The scene of them attached to a wooden cross and drowned is one I think I will never forget that and the Samurai buried in the earth and tortured by horses and never giving up his faith even though he knows all he has to do is renounce his faith and he will be free. Rodrigo is taken to a Buddhist temple to see Lord Cuan Sawano and it is there that he sees Ferreira who has given up the church along wit being an astronomer he is helping to expose errors and inconsistencies in the Bible and Christian teachings. Sawano asks Rodrigo to renounce his faith. Rodrigo rejects and is hanged upside down for six hours which is nothing compared to the days of torture that the Christian farmers had to endure. Sawano tells Rodrigo that if he renounces his faith he will be free and so will the tortured farmers. Finally he steps on the fumi-e, the silver virgin and is set free and given the wife of the dead Samurai and given his name.

The film is an intense voyage into the soul of man and his faith. Highly recommend it and now will search for Scorsese’s version of the same novel.