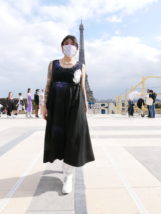 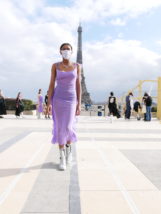 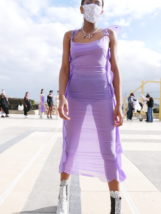 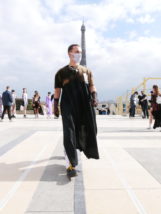 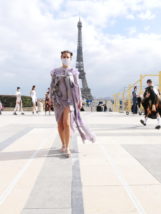 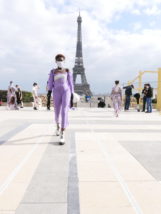 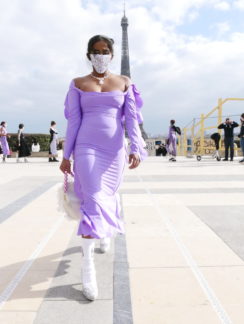 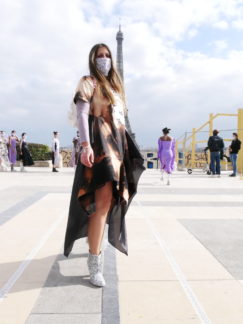 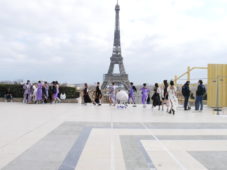 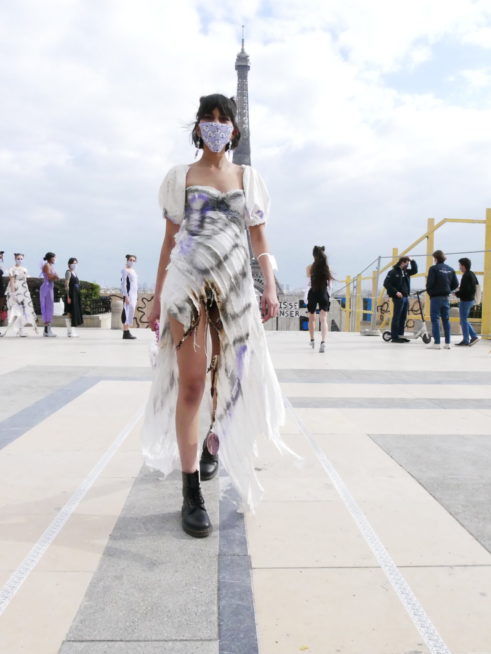 The purple moon was high above the Eiffel Tower as Chicken Turtle debuted her gorilla catwalk show. The no season collection was shown on a windy day to a few lucky journalists. The collection was brought to you. It was the first show I’ve seen live in a year, well almost Balmain…nearly the same location. It was outside and to a very select few. The idea behind the collection is experimentation, the clothes were all made by hand by the designer behind the brand, Ivo Barraza Castaneda. Chicken Turtle, the brand was inspired by Ivo’s muse, who he said looked like a chicken turtle. You might have seen his street art with his logo on the streets of Paris or Berlin. “So, the clothes were mad in an effort to experiment new ways of garment making and construction while they still remain useful and relevant to the Chicken Turtle girl.”

The collection is divided into three themes:

The Future black dress- made from up-cycled garments, the looks can be produced, the look will be the same but the textiles might change.

Cyber-Romanticism: inspired by the 19th Century imperial, romantic aesthetic. Singular Chicken Turtle print and the designer says: “body positivity is not an option it is the norm.”

Parisian Kawaii: The construction celebrates complexity of the female form using body conscious stretch fabrics, these are probably the most commercial of the collection.

Jewellery Collection: designed and crafted by Anjum Musbally, one of the looks is a series of crystals with a tiny Chicken Turtle inside.

The collection presentation reminded me of early Xuly Bet when he did gorilla shows in front of major catwalks. Here it was more intimate, come to you presentations and I salute Ivo for his dsire to move things forward and re-invent silhouettes.