Brittany S. Hall and Will Brill in a scene from Test Pattern, courtesy Kino Lorber

Will Brill in a scene from Test Pattern, courtesy Kino Lorber 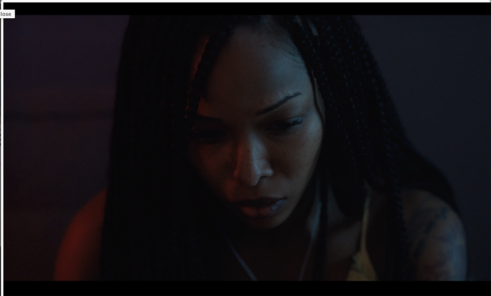 I had the pleasure of previewing the first feature film written and directed by Shatara Michelle Ford. I wouldn’t exactly call it a love story like Malcolm & Marie although they both share  a disconnect in the relationship. Malcolm & Marie was filmed like a play and highly stylized whereas Test Pattern is filmed as close to reality as possible and with minimal dialogue allowing a pace that gives you time to experience what is going on in Renesha’s head.  To set the scene Renesha is at a bar with her friends she meets Evan, a tattoo artist, they start dating and the unlikely couple falls into a relationship.  The inter racial couple is on shaky ground from the beginning with an extreme power gap. They live their lives quite separately even though they are in a long time relationship. I say unlikely,  she is black, beautiful and highly educated and he is a tattoo artist, not exactly dynamic, awkward and quite average looking. To take a break from the relationship she goes out one night with her best friend to a bar, drinks too much, chews gummies and finds herself in a motel where she is sexually assaulted. A similar topic was handled in I May Destroy You on HBO however this sexual assault did not come as a result of being drugged. Encouraged by her best friend played by Gail Bean, she drank too much and took chewables. The structure of the film uses a lot of flashbacks. The opening scene is a flashback and a glass of water for some reason is a recurring theme.

The film addresses many social issues: sexual assault, gender, race, injustice, power and the fact that it seems impossible for Evan, played by Will Brill to understand what Renesha, played by Brittany S. Hall,  is going through after being sexually assaulted. He believes that the system will serve them, she does not trust it yet he forces her to go on a hunt for the rape kit and to report the sexual assault to the police.  Renesha finds herself spending the day in a car with Evan looking for a clinic to perform a rape kit examination. I have to admit that I never heard of a rape kit but clearly it is time based and something that needs to be acted upon within hours of the assault.

The film is about emotional baggage and scarring that women have to overcome and how black women are failed by the justice system. The film points out how race and gender effect sexual assault. The film is realistic but also a tragedy showing how anytime a black person is violated things do not work out like they are supposed to. All you have to do is think about  the shooting of Breonna Taylor in her own home to confirm the injustice black women are faced with. The film deals with health workers, the law and black women and their relationship to the police. Her boyfriend, Evan, thinks he is doing the right thing but he fails his partner in a profound way. He spent so much time not engaging that he is lost by the end of the film. His inability to fully engage in her experience makes the likelihood of this relationship working out in the future extremely doubtful. He never takes the time to find out what she is going through nor how she wants to deal with the situation. He just assumes power and thinks that the system will be on their side.  The first clinic wastes more than two hours of their time, does absolutely nothing  and then won’t give Renesha back her ID before charging her 1,300$ which is totally illegal. I also wonder if the fact that Evan is a tattoo artist, branding the skin reflects back to power and slave owner? At one point during the   flashbacks he says to her while looking at her lovingly:  “I’m thinking of what I’m going to brand on you because you are mine.” I found that line very disturbing.

The first two visits to the clinics in search of the rape kit and the exchange between Renesha and Evan and the hospital workers showed how black females are not seen as humans and how they have to deal with oppression on a constant basis and yet still try to navigate through the systems. In the day long search for the rape kit the only time that Renesha is treated like a human is when the hospital worker giving her the rape kit is black, gentle and sensitive. That is the only time since the assault  that she feels understood.

The film is a reflection of our times with the white supremacist movement on the rise and the fact that social media has made us even more aware of social injustice to minorities which of course has been going on for more than 400 years but now, thanks to social media, the whole world is watching. In the end how you view the film reflects how you feel about race, class and gender and how you view assault. In 1962 Malcolm X said “The most neglected person in America is the black woman.” With this film Shatara Michelle Ford drives home that point.