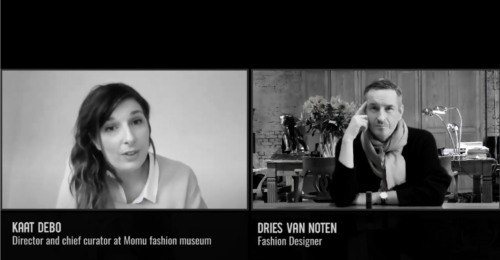 In this Polimoda Duets interview, Kaat Debo, Director and Chief Curator of the MoMu Fashion Museum offering a vast archive of the designer’s work (and set to reopen this September), talks to Van Noten about the past year and the challenges that lie ahead for the future, starting with the necessary changes needed in the sector to face the crisis. Van Noten also focuses on the various aspects of his vision such as the creative process behind his various collaborations, fashion shows, the role of emotion in fashion and the meaning of success. This exclusive interview is valuable for young people preparing for a career in fashion as well as professionals and enthusiasts of the sector.

One of the most successful members of the renowned Antwerp Six, Dries Van Noten launched his own collection in 1986. Ever since he rented a van with his fellow graduates from the Royal Academy of Antwerp and left for London Fashion Week, his defined intellectual aesthetic has established itself on the international scene. Even though he sold his brand to Spanish group Puig in 2018, Van Noten has maintained his independent spirit and creative integrity. He remains chief creative officer and president of the brand.

Van Noten is the son and grandson of tailors. He grew up in a family that worked in fashion, learning the commercial and technical side of the industry before devoting himself to design. In 2007, he opened his first boutique in Paris, followed by one in Tokyo and many others. Today, Van Noten has six independent stores and his collection is sold all over the world.

He received numerous prizes and awards during his career such as the CFDA International Designer of the Year Award, the title of Royal Designer for Industry of the RSA Trustee Board of London and Officier de l’Ordre des Arts et des Lettres, the Gold Medal of the Flemish Royal Academy of Belgium, the Couture Council Award for Artistry of Fashion to the Couture Council of the Museum of FIT of New York and the Culture Award of the province of Antwerp. In 2017, he was given the title of baron by The King of Belgium in recognition of his career and cultural contribution. His drawings and inspirations have been the subject of important exhibitions at the Musée des Arts Décoratifs in Paris and in Antwerp.

The video is part of the Polimoda Duets series that has already featured Marina Abramović, Marco Bizzarri, Linda Loppa, Margherita Maccapani Missoni, John Rankin, Lidewij Edelkoort, Mobolaji Dawodu, Rick Owens, Tim Blanks, Beatrice Venice, Vanessa Friedman and Iris van Herpen. With this Duets project, Polimoda connects with the world of art, fashion and all contemporary culture, combining its tradition of collecting direct testimony from key figures in the sector with a new format of exclusive video interviews. In each episode, an icon is interviewed by a journalist, influencer or researcher in the field of fashion.