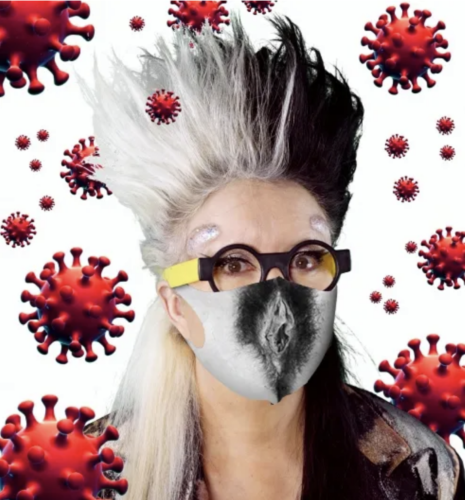 ORLAN is the guest of Affaire en cours, on the occasion of the theme day “What do we do with the public debate” on France Culture. The visual artist, who turns her own body into a work of artistic performance, defines it as a place where public debate can take place.

On Friday 16 October, France Culture proposes a specialised programme around the question: “What do we do with the public debate? Social networks, culture, media”. To answer this question, Affaire en cours gives the floor to ORLAN, a plastic artist known in particular for having used her body as the object and subject of artistic performances by means of cosmetic surgery operations.

In France today, can an artist express himself freely?
Theoretically, yes. But there is enormous pressure from algorithmic censorship, whether it be from Facebook or Instagram.
ORLAN

A whole part of ORLAN’s works where the artist shows his naked body had to be adapted to avoid censorship on social networks.

I had to put small skulls, which are my own skulls made from my medical scans, at the end of my breasts to cover them. It’s a mind-boggling situation. It’s as if the Sistine Chapel and the works of Michelangelo were being moved backwards. How is it possible in this day and age that you can’t show a breast? It’s not only strange, but it’s often under the cover of religious pressure. But if we believe that God made man in his own image, it is necessarily a masterpiece, and a masterpiece that we must show. These aberrations around us also produce a lot of self-censorship.
ORLAN

ORLAN’s work questions the status of the body in society in the face of cultural, traditional, political and religious pressures.

I am enraged to be forced to operate by misappropriation or deregulation in my own time.
ORLAN

“Let my body become a place for public debate”
If people describe me without seeing me, like on the radio, saying that I am a woman with two bumps on my temples, they will think that I am monstrous and undesirable. If they see me, it’s completely different: these bumps have become organs of seduction. These bumps are my convertible.
ORLAN

ORLAN has used cosmetic surgery, not against the practice itself, but against what is done with it. Thus, she operates a displacement by having implants, usually used to raise the cheekbones, placed on her temples.

This small displacement or malfunction has caused a lot of ink to flow. This is where the public debate exists, because I didn’t choose to have surgery in a place covered by clothes, but on my face, my business card that everyone sees.
ORLAN

Is it the artist’s duty to take part in public debate?
I think we already have the curtains, furniture and placemats to decorate our flats. The art that interests me is really the art that questions our society. I try to say important things about the phenomena of society and then to find the right materiality. It can go through the body as well as through many other things.
ORLAN

ORLAN is also a photographer, sculptor, her art is multiple, expressing herself on many different supports.

I am absolutely not subject to any one technique or material. What matters to me is to question my time with a critical distance and to question it in every possible way.
ORLAN

What is important to ORLAN is therefore the concept, the approach and the questioning that form the backbone of its works. It is around this skeleton that she then puts “flesh”, searching for the right materiality, from biotechnologies to 3D printing, through aesthetic surgery and the cultivation of her own cells and microbiota.

ORLAN in capital letters, outside the rows
I’m actually not someone who speaks in a manner of speaking. I speak loud and clear and I want my word to be heard. It’s really important for me to write my name in capital letters, because I don’t want to be put in the ranks. It’s funny because, for example, Wikipedia says “Orlan is written in capital letters” but they still write it in lower case. So many small details that lead to chain reactions that are difficult to keep up with and overcome. As soon as we step aside, they try to get us into the ranks.
ORLAN

“Beauty is a matter of dominant ideology”
I would like to say that beauty is a question of the dominant ideology. Here and now, models are being imposed on us that we absolutely must hold. For example, in my African Self-Hybridization, I have worked from ethnographic photos in which a black woman appears with a huge labret (a lip ornament in the form of a flat disc) who looks very happy with her seduction. In her tribe, at that time, in the history of her tribe, the one who had the biggest labret made the guys get a hard-on. And so everything was going well for her. Whereas if we had labrets today, everybody would turn away from us.
ORLAN

The artist ORLAN will perform at the Philosophia festival in Saint-Emilion on October 24th and 25th, and his work for the collective exhibition “Real Utopias” at Manifesta 13 in Marseille can be seen until November 30th, 2020.