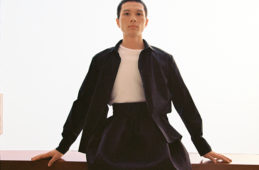 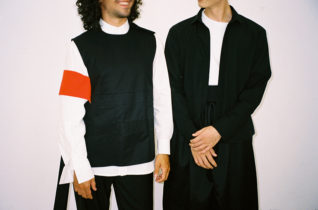 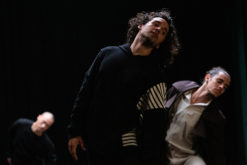 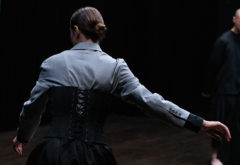 Route Six is the result of a ten year journey between two friends Kent Lin and Xing Hoo. They met in Paris and November 13 of this year the brand was launched. The theme of the collection is “Protection” and it is about finding the courage of unwillingness to be ordinary.

I had a chat with Xing Hoo:

DP: How did you meet Kent Lin and launch Route Six.

XH: Before going to Paris, Kent  worked in interior design for 8 years, and Xing  graduated from college in fashion design. In October 2010, we both went to study in Paris coming from different cities in China. On the first day they arrived in Paris, we met for the first time because we were looking for an apartment with the same agent, and then we happened to be in the same class of language school. Once in a chat on Pont Neuf, Kent appreciated  Xing’s graduation design theme “Memory”, at that time, he was attracted by Xing’s ideas in fashion and art. Since then, we became very good friends, we travelled together, played together, and dreamed together. Always had this idea that we will definitely do something together in the future, and we found the strongest intersection between us is fashion, so naturally we were led on this path. Our friendship always remind us of the novel《Just kids》by Patti Smith, when she wrote about the story between Robert Mapplethorpe and her. This pure feeling in each other’s memories will become the spiritual power to support each other no matter any problems in the future.

XH: We met in 2010 in Paris, Kent studied fashion design at Studio Berçot in 2011, and then he worked at Alexis Mabille for his internship. Then he went back to China in 2015, continued working as an interior designer, and kept thinking about the concept of the first collection for our brand. After I obtained my master degree in Fashion Management from Ipag Paris, I started working for Diane Pernet as an intern, thanks to this valuable experience and generous advice from Diane, I learned and built a brand new perception about fashion. After that, I’ve been working doing several different roles: brand agent, fashion & art teacher, events organizer, and fashion film producer. In 2020, we felt that we should give ourselves a gift for the ten years friendship, so we launched our brand.

The name of the brand “Route Six” was already decided when we were in Paris.

“ROUTE SIX” comes from the novel 《On the Road》 by Jack Kerouac. The Route 6 is the closest road to the destination of the journey on the map, but in reality it no longer exists, which is a metaphor for the reality. ROUTE SIX means that we are always on the road, we don’t know how we will be, but we don’t care. We seek, we question, and we try to get as close as possible to the limit that we can reach.

DP: You talk about protection, how do you define that in the collection?

XH: Both of us are easily touched by pure things, just as we were touched by the friendship between Patti Smith and Robert Mapplethorpe. We did not deliberately search for a certain subject, but things that touch us from our memory.

In the last segment of the movie “Brokeback Mountain”, Ennis found that Jack had hung their shirts together on the same hanger, then he puts their clothes inside out, his shirt on the outside to cover Jack’s: This time, it’s my turn to protect you.

In the movie “The Kite Runner”, Hassan’s unconditional protection to Amir moved us deeply.

Combining our own experience, we thought of the theme “Protection”.

XH: This idea also comes from:

Thank you Xing I really appreciate your insight and feel fortunate that I we met and worked together while you were in Paris. I wish you both great success.