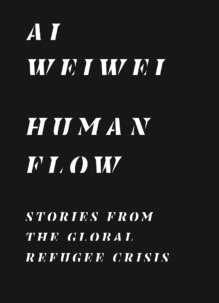 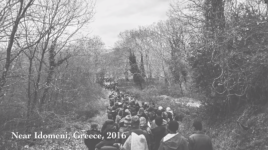 I was sent the book Human Flow Stories From The Global Refugee Crisis to review. It is not an easy read. The book records the stories gathered during the making of the 2017 Ai Weiwei documentary Human Flow spotlighting his journey across 23 countries and interviewing 600 refugees, aid workers, politicians, activists, doctors and local authorities. The idea of the book is to give a voice to the voiceless people involved in the refugee crisis. Millions of people have left their homes and have no future, some spend up to 20 years in refugee camps and powerful nations pay no attention to their problems.

Out of the 600 people interviewed by Ai Weiwei, 100 are in the book. The refugees talk about their experiences crossing boarders, pushed out of their homes and constantly they have the feeling of uncertainty and distrust. They are living in refugee camps, stuck in camps robbing human beings of all aspects that would make their lives tolerable and meaningful. Over 65 million people in the world have been forcibly displaced from their homes. If children grow up without any hope, without any prospects for the future without any possibility to make something out of their lives then they will become vulnerable for all kinds of exploitation including radicalisation.  The refugees talk about the dire circumstances that drove them to migrate, war, famine, persecution and they talk about their hopes and fears. Just last week in Paris refugees were forcibly removed from the Place de Republic.

(Showing family members’ identity cards) They all died at sea. I have six kids. This is my brother, Sakhi Ahmad; he has gone completely mad. Sakhi has two kids and his wife is buried here. His son and daughter are buried here too. This is Ismetollah Sediqi. He introduces the family saying there were seventeen of us with IDs. Now there are only twelve. Five of us are under the dirt, two of us under the water. What is left for us? Our money and our lives are gone.

We’ve always prided ourselves on a sense of openness. Jordanian hospitality defines who we are. We’ve tried to play a role in keeping an open door, enabling people to find refuge here and to retain some sense of dignity until they are able to return to their homes. The average stay of a refugee is about 25 years. We’ve truly been home for waves of people coming from throughout the region as a result of the Israeli-Palestinian conflict, the wars in Iraq, and most recently, the tragedies across the border in Syria.

These are just a few sound bytes from 100 conversations. In the next few years, we will see millions of refugees in Africa and other countries due to drought and famine. It is a global condition and the public needs to be aware of this human crisis.  A lot of people now do not feel comfortable helping others in desperate situations. The far right has no solution except throwing up a wall. They  send refugees back to their homes which puts them in danger.

Nobody leaves their country lightly they only put themselves through the hardship of fleeing in order to find safety. Refugees could stay in camps for years, decades; it becomes a psychological warfare. No work, no education, many refugees would rather go back and die in their own nation than to stay in a civilised society and not to be recognised or understood.

Ai Weiwei is driven by his conscious and one of the world’s most prominent artists and political activists. His books include Weiwei-isms and Humanity (both Princeton). His art has been exhibited at Tate Modern, the Guggenheim, Museum of Modern Art and other institutions. He lives in Berlin. Twitter @aiww.

The book was published November 2020