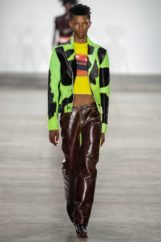 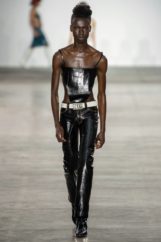 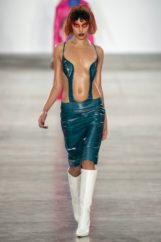 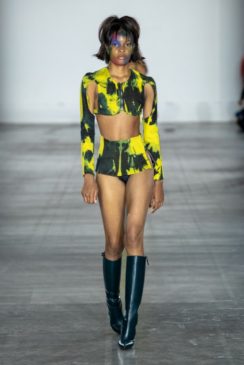 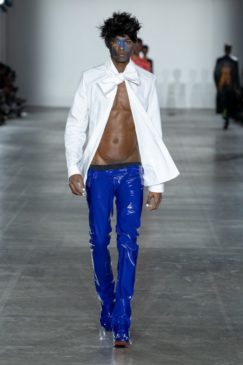 London Fashion Week may have found its saviour.

I first heard of Mowalola when Gap announced its 10-year partnership with Kanye West’s Yeezy. It was confirmed that Mowalola Ogunlesi, the 25 year old Nigerian-British designer would be the Design Director for Yeezy x Gap.

Then came the news of Mowalola’s inclusion in GucciFest Emerging Designer Fashion Films… presenting us “Drip City” a short-animated film that takes you on a trippy ride to an alternative world, where meteors hit and aliens merge identities, inspired by video games and simulations of fight matches. A complete escape from reality.

“I’m interested in exposure — whether that’s emotional exposure, showing your skin, or becoming fully vulnerable — and the idea of expressing that through the way that you dress,”

The strength of Mowalola comes from being completely boundless. Nothing classic, usual or familiar to see in her designs. A powerful expression of the Nigerian and London youth cultures that is acidic, futurist and genderless. Minimalist but loud, with garments exposing as much skin as possible…thong-straps, low-rise leather pants and micro-mini skirts leaving little to the imagination. Her bold colors and patterns mix together as if you are looking through a kaleidoscope. Effortlessly young, careless and fun.

After dropping out of Central Saint Martins one year before graduating, Mowalola Ogunlesi held her first show with the support of Fashion East at London Fashion Week 2019. Since then, celebs like Kim Kardashian, Meghan Thee Stallion, Drake, Solange have been spotted wearing her pieces. Last year Naomi Campbell caused controversy when she wore Mowalola’s white halter neck dress which featured a deep red bullet hole wound from her “Coming for Blood” collection. Many interpreted as a way to draw attention on gun violence and Black Lives Matter.

The designer went on social media to clarify the meaning of the dress, expressing “This dress is extremely emotional to me – it screams my lived experience as a black person. It shows no matter how well dressed you are or well behaved, we are time after time, seen as a walking target.”

Though her brand is only a few years old, Mowalola seems to have hit home run when it comes to understanding the zeitgeist.