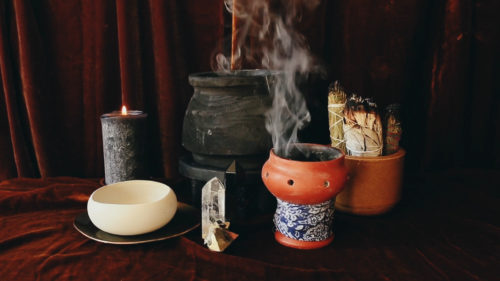 In  these crazy times when I really feel like I am living out of a page in Stephen King’s The Stand,  written in 1978. I was intrigued by the opening paragraph of an article in the Business of Fashion where it discussed how the Paris-based PR firm Ritual Projects had enlisted an energy healer, John James of Honour Thy Lovers,  to cleanse her office space before her employees returned to work. The process involves mediation, chanting and shaking a rattle around the office or living space. I wanted to know more, who is John James and what exactly is the universe of Honour Thy Lovers. In a few words it is a self-development practice with a focus on ceremonial tarot, portals of ritual healing, energy cleansing and talismanic armour.

John James grew up in Edmonton, Canada, a small prairie, oil and gas town where not much happened outside of life among the plants, trees and animals. Her upbringing was that of a devout catholic. In her teens she went on a religious pilgrimage where a rather disturbing incident occurred that forced her to look deeper into her spiritual upbringing. A few years later she lived another experience that shook the foundations of her catholic upbringing. Being a devout catholic when she encountered a hostile experience, she went to the church seeking a spiritual shelter but instead of a haven what she was faced with was a closed door. These two traumatic incidents forced her to re-evaluate and question her religious upbringing and helped to lead her down a very different spiritual path 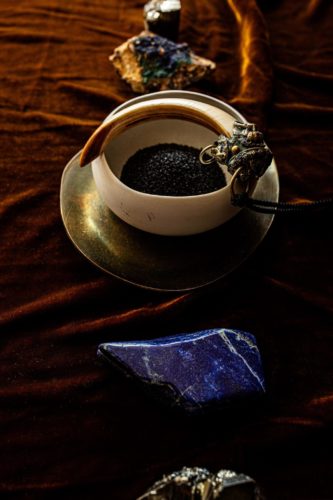 After university, along with working in advertising she started making talismans as healing armour and began what was to be a long work in energy cleansing. In the beginning this was something she did for herself and those close to her and it wasn’t until 2017 that she began to openly invite people to sit with her. The energy cleansing started this year. She has no formal training; it is more a spiritual path and I guess one could say a gift from the universe. 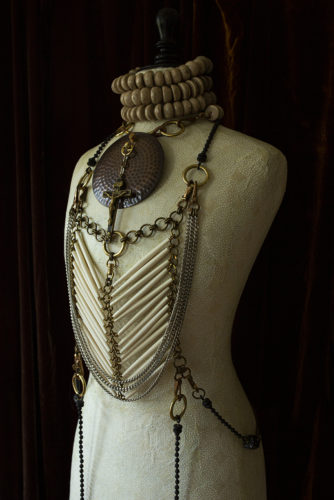 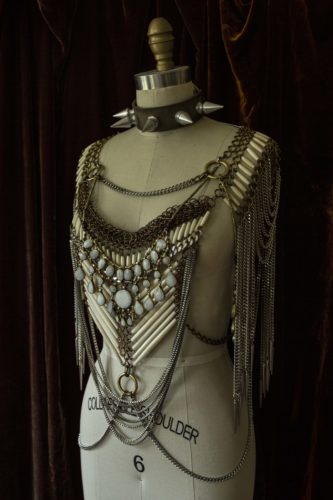 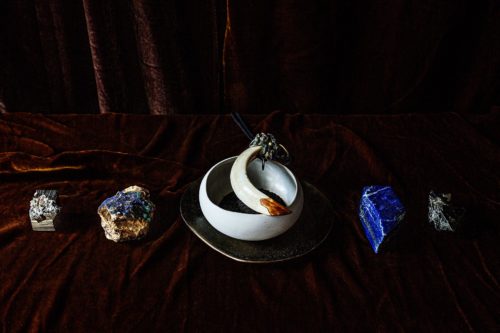 I had the opportunity to experience a ceremonial tarot card reading which due to CODIV-19 was done through google meet. This means that it really doesn’t matter where on the planet you are based you can just contact John James through her website and google meet. Google meet as you no doubt know doesn’t have a 45-minute cut off like ZOOM and when you get a reading, she is not watching the clock. It is over when it is over, and it could be an hour or extend to two or more if needed. Her method is quite different than any other tarot card reading I’ve ever had in as much as it starts with a meditation that gets you both on the same plane and is a shared concentration then it is only one layout of the cards. However, within that one layout the topics that are covered are: where you stand in your reading and you challenge and obstacles, your past leading to your present, your subconscious behaviours and patterns and what you truly desire. Your present leading to the future, advice or recommendations, hopes and fears, environment cultivated or created and potential outcome. She might also throw out a few extra cards. If you have a remote reading, she will send you the layout of the cards and an audio of the reading which is always something you can refer to. 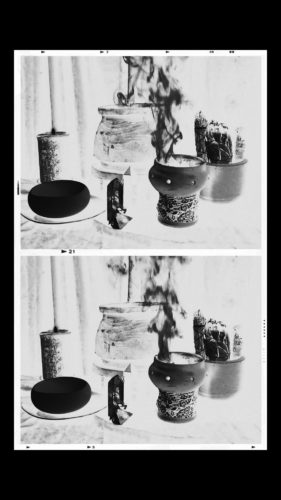 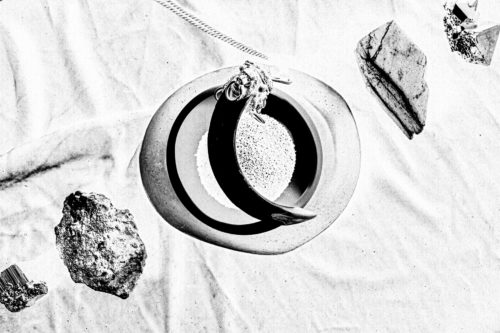 John James is a traveller and she’s lived in many places both in Canada and in the Bay Area of California, which is just outside San Francisco and is currently based in Paris. While she was in California, she met a healer which was the catalyst for her to return to Vancouver. From Vancouver she moved to Paris with a strong desire to let go of her past and also the world of advertising and art direction. In Paris she had a strong spiritual experience with someone, but it ended not in such a good way and around that time, which was last year,  she was invited to a retreat and to reconnect with a Shaman she knew from San Francisco and go to an energy portal in the Amazon. The idea was to go to the Amazon and work with a Shaman to heal from her past. Unexpectantly the Shaman she was planning to work with was not there and destiny brought her in contact with the healer, Paje Bire Huni Kuin, he is the medicine doctor of his tribe. You should google his name and listen to him speak and even if you do not understand Portuguese you will feel the message and listen to the music. He taught her how to speak with the heart and not words. Paje Bire Huni Kuin exposed her to different plant medicines and rituals bringing herbs and ayahuasca from his village. He shared his knowledge with authority, humility, wisdom and generosity. The effects of this sacred medicine is to reconnect with nature and is a big learning for each on the path. After this life changing experience John James realised that if she was to pursue this path she had to let go of her work in advertising because she could not reconcile it with what had become a deepening of her spiritual path. 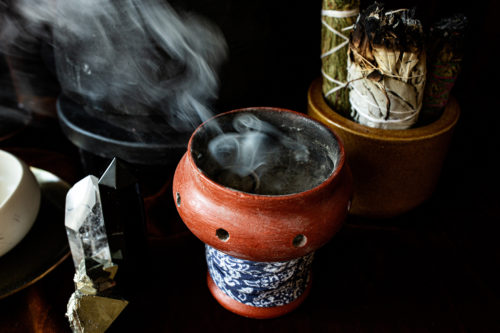 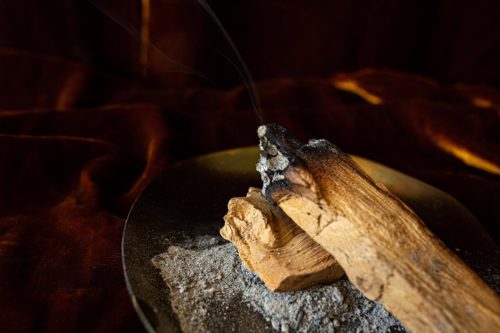 As we are all facing the pandemic for a year or more, nobody knows, it seems like the perfect moment for John James to start her energy cleansing rituals. The energy cleansing dimension of her work just started as a business the beginning of this year. So, how does it work you are wondering I’m sure. Let’s use Ritual Projects showroom as an example. John James comes into the space and first “I set incense outside doorway and sprinkled salt at the doorway to protect the space. The door is the main portal to the space so by doing this anything coming in or going out would not harm the ceremony. Next I set up an alter where I have my prayer mat for meditating and put different colour candles for different aspects for example:  prosperity, purity, transformation. Then I set out different incenses and open the ceremony by meditating and connecting with the space. Then I use sound to wake-up the space. I meditate and walk around the space with a rattle creating a rhythm to open up the energy, to wake-up energy in clockwise motion to allow everything to open. There are 3 rounds of different incense the first speaks to the spirit’s energies, the second is to ground intention of what we want for the space and then a closing incense to set good intentions. In addition to working with the space, she also worked with the staff.” Said John James. 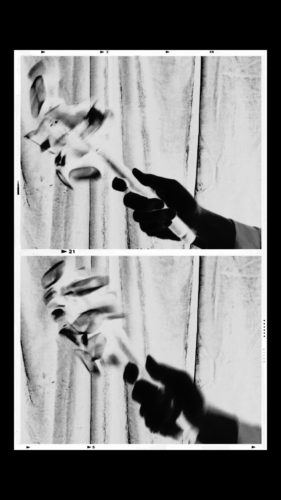 People come to Honour Thy Lovers for different reasons the most common reason is that they want to make a major change, but they don’t know how to achieve that on their own and they want to address the change in a meaningful way. “I see it as I am channelling messages for them and helping them to walk the path and go through the doorway.” Said John James.