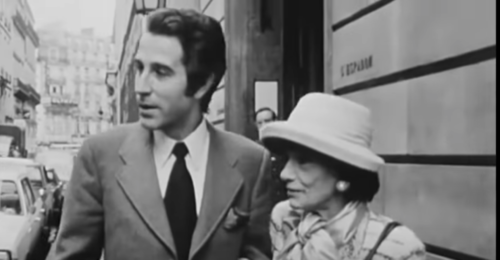 1970. While Coco Chanel, 87, is in the twilight of her life, the chic old lady with the pearl necklace talks to Jacques Chazot. “I’ve always fought”, lets go of the eternal “Mademoiselle”, candied in her legend. The daughter of a linen maid who died prematurely and of a peddler who abandoned her, little Gabrielle, born in 1883, was placed as a maid at the age of 12 with a cousin, before she ran away from an arranged marriage and took her meagre legs around her neck. The beginning of an endless solitary war, which first leads the young adventuress to Moulins, where she learns the rudiments of sewing by day and sings at night at the cabaret, rounding off her ends of the month on the arms of gentlemen sensitive to her androgynous charm, including Étienne Balsan, a horse breeder, and Arthur Capel, an English polo player. Although these protectors opened the doors of the world to her, this pioneer owes it to her extraordinary talent to rise to the top, revolutionising the fashion of her time by purifying it and freeing women from their corset on the eve of the Roaring Twenties.

Controversial icon
Fiercely independent, the authoritarian director of the rue Cambon house, who gauges her collections from her famous mirror-covered staircase, is nonetheless fundamentally conservative. Terrified by both the Popular Front and the Bolshevik threat, during the Second World War she was guilty of “horizontal collaboration” with a German diplomat, before being suspected of intelligence with the enemy during the Liberation and going into exile in Switzerland. On her return, Dior was crowned the new prince of haute couture. However, the fallen but undefeated queen still created a masterpiece, her emblematic tweed suit. Featuring a wealth of archives, this documented film retraces the destiny of the great seamstress with the insolent success and temperament of an Amazon. Beyond the controversial icon – Françoise Sagan judged her to be “appallingly wicked, cruel and anti-Semitic” – it is a nuanced portrait of an artist passionate about her craft, with a style full of audacity, as well as that of a woman of the last century who fought in immense solitude throughout her life.