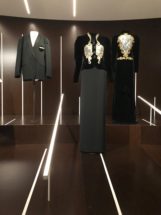 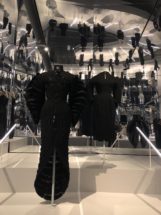 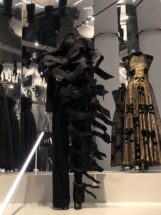 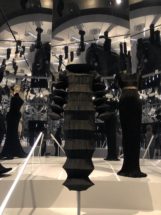 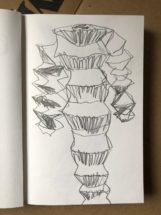 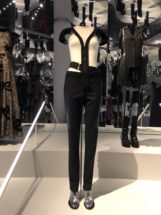 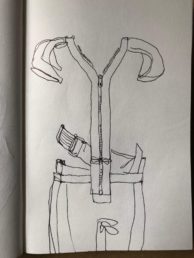 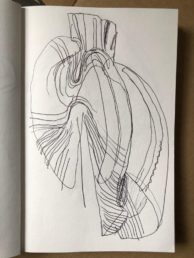 The exhibition, About Time: Fashion and Duration goes from 1870 to now celebrating The Met’s 150th anniversary. Employing Henri Bergson’s concept of la durée (duration), explores how clothes generate temporal associations that conflate past, present, and future. Virginia Woolf serves as the “ghost narrator” of the exhibition.

La Durée; a term coined in 1913 by French philosopher Henri Bergson, refers to the subjective experience- rather than the objective definition- of time. In order to grasp time, our mind sees states as “side by side” or sequential. True change can only be grasped by intuition. La Durée is a consciousness, which could only be achieved through mobility, dynamic flow and multiplicity.

​The projection mapping allows the observer to experience passing by the installation in a different manner, making them aware of La Durée and subjectivity of time.

Back to The Met, the timeline unfolds in two adjacent galleries fabricated as enormous clock faces and organized around the principal of 60 minutes of fashion. Each minute features a pair of garments, with the primary work representing the linear nature of fashion and the secondary work its cyclical character. “To illustrate Bergson’s concept of duration—of the past co-existing with the present—the works in each pair will be connected through shape, motif, material, pattern, technique, or decoration. For example, a black silk faille princess-line dress from the late 1870s will be paired with an Alexander McQueen “Bumster” skirt from 1995. A black silk satin dress with enormous leg-o’-mutton sleeves from the mid-1890s will be juxtaposed with a Comme des Garçons deconstructed ensemble from 2004.”

All of the garments are black to emphasize changes in silhouette except for a white Viktor & ROlf s/s 2020 haute couture look made from upcycled swatches in a patchwork design as a symbol for the future of fashion with its emphasis on community, collaboration and sustainability.