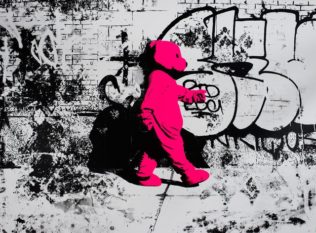 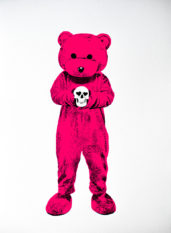 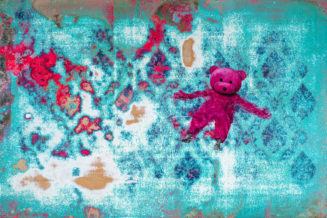 RAINBOW BRIGHT – The natural world is slowly being inundated by micro plastic – as a backdrop to the bear they merge to become the illusion of forest. Up close a caleidoscopio of psychedelic colour, the illusion turns green with distance. While plastics offer a psychedelic micro landscape of hope and Proximity (invoking the many tones and shades of life) it Eerily hides the darker invasion of the Environment by the same illusion of beauty, evident from the distance of space and time. Original photo taken in italy – Dolomites

RISE ABOVE YOURSELF The bear shoots over a near invisible adversary, almost merged into the background, like a silent inner voice. Pink bear defies what sometimes seems like the biggest obstacle, that inner voice seeding doubt. We can be our own worst enemy. Here, the bear, and thus the self, rises above and dares to shoot over that inner voice, on occasion the only obstacle between yourself and your goals and aspirations. Original photo taken in USA – New York 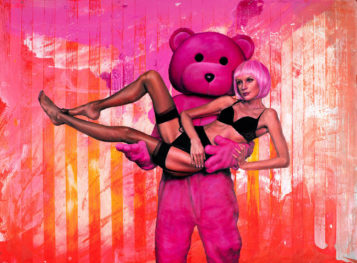 KING OF THE CASTLE – The Pink Bear stands atop a rock, not the highest, yet at great height. It‘s less about coming first or climbing the highest mountain, rather moving forward, overcoming personal challenges, and defying and defining boundaries, be they large or small Original photo taken in Australia – Sydney/Bondi 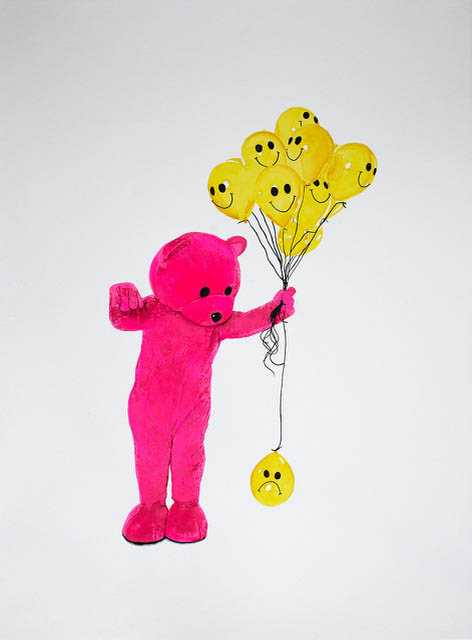 A new pop up (physical and virtual exhibition) opens at the Lilford Gallery on the 17th October featuring the work of the multidisciplinary London based British artist – Paul Robinson (who works under the name of LUAP), and who dynamically fuses painting and photography .
Luap uses a pink bear costume which he takes to the most unlikely locations, photographs him and then creates a painting from it, tackling the issues of mental health and just keeping up with today, drawing from his own experience.
Centred around the challenge of being, environment and societal issues, he talks to us through the alter ego of The Pink Bear, unapologetically exposing his vulnerability using a pink bear suit. Ironically, the very real costume frees both him and us, the onlookers, from the masks we constantly wear by being juxtaposed with unlikely, often breathtaking scenarios.
LUAP sells and exhibits his work globally in London, New York, Dubai, Hong Kong & Berlin. He has exhibited alongside internationally renowned artists including Picasso, Banksy, Warhol & Hirst at Andipa Gallery Knightsbridge and created large bespoke artworks for exclusive London members clubs and shortly for the new Daisy Green Collection location in Paddington. A Pink Bear print recently sold for three times the listed price at Christie’s on behalf of the Terrence Higgins Trust.
Timings
Daily free entry (Monday to Saturdays) –  17th October – 31st October 2020 – 10.00- 17.00pm
Sunday 11.00 – 16.00 and Virtual Exhibition from the 17th October to 17th November 2020
Lilford Gallery – 3 Palace Street, Canterbury, Kent, CT1 2DY