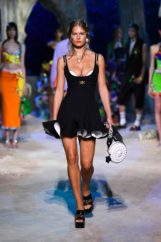 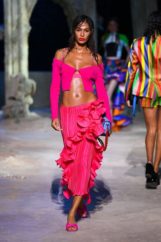 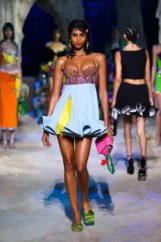 Donatella Versace revealed the latest Spring/Summer 21 collection with a live-streamed show in the lost city of Atlantis or as she calls it VERSACEPOLIS.

To explain the collection, Donatella said, “… something that could be in tune with what has changed inside all of us. To me that meant dreaming of a new world. A world made of popping colors and fantastic creatures and a world in which we can all coexist peacefully.”

The setting was of course marvellous, it felt as if we were looking at the ruins of a recently discovered underwater kingdom, which according to the brand was “ruled by Medusa”, the mythological creature from Ancient Greece, who with a gaze would turn men into stones and its city “populated by strong and confident men and women”.

With their wet hair and skin, the models looked as if they had just walked out from the sea and to the Versacepolis. The collection was filled with sea-centric elements; there were starfish prints, cascading skirts that looked like shells, Little Mermaid inspired bras, and references to Gianni Versace’s Spring/Summer 1992 collection.

“I wanted to do something disruptive and to break the rules because I think that, what worked a few months ago, does not make any sense today. Creatively, that meant finding a way to bring the DNA of Versace to a new reality and to people who have undergone a deep change.” Donatella said about her collection.

I applaud Donatella for being a strong leading woman in the industry, but this collection did not scream empowerment to me nor did it seem like it was right timing. Today, as we are becoming more aware of how much we buy and consume, majority of the brands are choosing to tone down their collections and to do less. But according to Versace more is still more and apparently it’s also never enough.