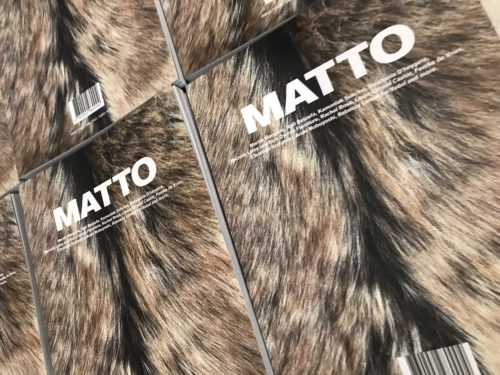 I met Editor-in-Chief and Creative Directors Aldo Buscalferri and Dominika Hadelova, the force behind MATTO MAGAZINE when my dear friend, Konstantinos Menelaou was in Paris. He made a video for them and it was playing during the launch of their 3rd issue. This time Aldo made a video of Michele Lamy that was playing at the opening, I arrived, in my normal CODIV-19 way, 30 minutes before the opening. That way I did not have to be in a crowd and had a nice chat with Aldo and Dominika which you can listen to here.They like to do all of their interviews face to face as opposed to email. They interested Martin Margiela to collaborate with them on this issue. You recognise his work on the cover of course. The magazine is basically an art magazine but they have no limits as to what they want to cover in each issue. Visit their site for more information and where you too can get a copy. www.mattostudio.com.

The magazine is published biannually.