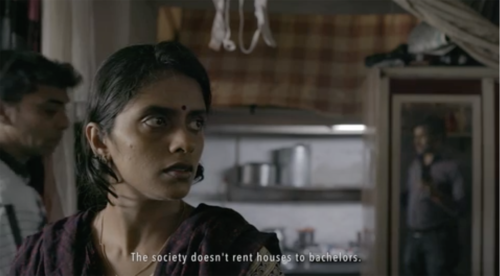 In a country where marital rape is not a legal crime, it took a lot for Smita to escape an abusive marriage. She lives in a one room apartment in Mumbai, earning her living by making imitation mangalsutras (a necklace worn by married women). But the recent tranquility of her life is shaken when the doorbell rings.

Smita finds herself fighting beasts of a different kind as she discovers a strange pre-requisite to renting a house in middle-class Mumbai. Will Smita find her space? Is there any hope for liberation — societal and/or sexual? Will the doorbell ever stop ringing — again and again? Counterfeit Kunkoo isn’t a feisty feminist retort to the deep-seated misogyny that finds its way into everyday life. It is an exploration of the idiosyncrasies that come with it, the battles one must fight, and whether winning or losing those battles matters at all.

We spoke with Reema Sengupta, writer, director, editor and producer of the film, as she shares with us her journey into filmmaking and the efficacy of film as a tool to voice your beliefs and concerns. Counterfeit Kunkoo has also screened at over 100 festivals, from Sundance Film Festival in the USA to Short Shorts Film Festival in Tokyo, Japan, and on top of that, is the winner of an abundance of awards.

What led you onto the path of filmmaking?

Visit NOWNESS for the rest of the interview.