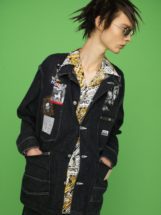 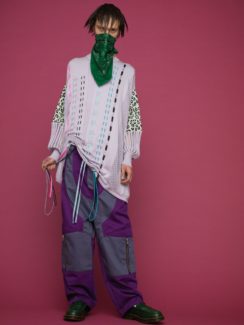 Winston Smith, theAmerican graphic artist,  is known as a “Surrealist Punk Artist” having worked with punk legends such as Dead Kennedys and Green Day and this season…with KIDILL. KIDILL has selected designs from Smith’s archives for their SS21 collaboration collection.

In 1981, Smith’s political and shocking piece “IDOL” appeared on the Dead Kennedy’s album “IN GOD WE TRUST, INC.” This album, banned in England and condemned by the American religious far right, landed both the artist and the band a permanent spot in the punk culture’s Hall of Shame.

In this SS21 collection, there is also a collaboration with the iconic Japanese denim brand EDWIN. It has been producing high-quality denim, specializing in traditional craftsmanship and in the expertise of the sewing techniques. The brand has recently built a sewage treatment facility in its factory, in order to reduce as much as possible the impact of draining indigo dyes, making EDWIN Japan’s leading denim manufacturer, that continues to produce high quality products while minimizing the impact to the environment.