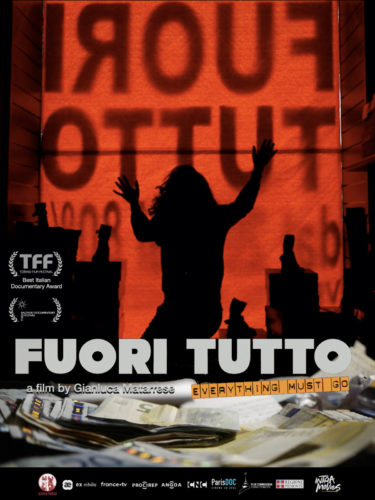 It is with great pleasure that I inform you that FUORI TUTTO by Gianluca Matarrese will be screened on FRANCE 3 July 22nd at23h15.  The film was awarded best Italian Documentary at the Torino Film Festival 2019, Best International Newcomer at Thessaloniki International Film Festival 2020 and the Prize of the Italian Press in the Officiel Selection at Nastri d’Argento 2020.

As Gianluca has been living in Paris for the past 18 years he decided to go back to the town where he grew up and make a personal documentary about his family. The project was spread over four years. His family was at the head of a shoe store empire in Italy. The business was on the verge of bankruptcy and the family was burdened with debts. Gianluca said there was always the potential for drama in his family and since he was a director working in reality tv and entertainment he thought why not make a personal film. “Like the prodigal son, I decided to return to my home country to make my first film, a modern fable with a touch of Italian-style social tragicomedy. This is the story of my return to my roots.”

“I was fortunate enough to be born and raised in a family of ordinary, colourful heroes who fight the destiny that tries to bind them to a life crushed by debt. To support them in this daily struggle, I did what I know best. I made this film.” He co-wrote the film with Nico Morabito. There were 350 hours of footage and was shaped through the editing. In documentary films there is a lot of writing and so the writing and the editing shaped the films. The film is very personal and because of that it is universal.