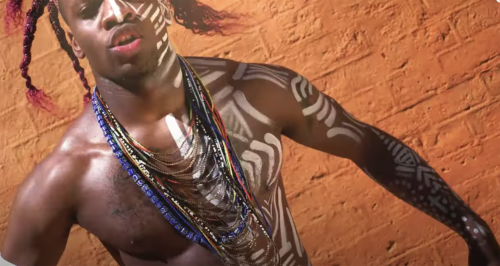 Directed by HUMAN (Instagram @_____H_U_M_A_N_____ ) –
DOP & Editing: Workout brothers –
Dancers: Brice Ntamag / Dedson Killah / Cam Lacroix –
Streetart by Espion : Les Mains de la paix –
Model: Aurélie Giboire –
Assistant: Arthur Balatier
Afro Bolero : In the beginning was the rhythm. I must admit that initially, I had no intention of being inspired by Ravel’s Bolero more than by its rhythmic figure, these famous two measures of ostinatos repeated 169 times on snare drum. As often, I like to confront a secular rhythm with electronic music 2.0 in order to blur the dance floors. When Mo Laudi, a Paris-based South African DJ, joined me in the studio, he delivered a great rap full of positive energy and geopolitical rhymes, from Patrice Lumumba to Biko and from Congo to São Paolo. Then Queen Angelique Kidjo, like a divine diva, fervently sang her hymn “Lonlon” in the Mina language, where the Afro literally meets the Bolero. We will not forget the fine team that allowed me to cook up this sacred cocktail: Flamme Kapaya, outstanding Congolese guitarist, the Parisian DJ-beatmaker Lazy Flow and the late Hilaire Penda, Cameroonian bass player and an active member of the Parisian african musical scene, who unfortunately left us since. Benin, South Africa, Congo and Cameroon meet in Paname, the capital of World Sounds, but the musical adventure did not stop there. The remixes take us straight to London with Poté, to Berlin with Daniel Haaksman and to Johannesburg with the super-group Batuk formed by the godfather of the African electro Spoek Mathambo, the kwaito maestro Aero Manyelo, and the Mozambican singer Manteiga. At a time when travel is prohibited or not recommended, let’s be grateful, for music does not need certificates or passports and knows no borders.
Philippe Cohen Solal
Angélique Kidjo (Vocals)
Mo Laudi (Vocals)
Mweni Flamme Kapaya (Guitar)
Hilaire Penda (Bass)
Lazy Flow (Programming)
Philippe Cohen Solal (Keyboards, Programming)
Written by Mo Laudi & Angelique Kidjo & Philippe Cohen Solal
Composed after the theme Bolero by Maurice Ravel
Recorded and mixed by Florent Cortesi @ Substudioz
Mastered by Benjamin Joubert @ Biduloscope
Produced by Philippe Cohen Solal (c) & (p) 2020 ¡Ya Basta! Records – Science & Mélodie – 4 rue Martel, 75010 Paris
Stay in touch, follow me on the music platform of your choice to remain updated of all my music: Spotify: http://bit.ly/spotpcs Apple Music – iTunes: http://bit.ly/ampcs Deezer: http://bit.ly/deezpcs Youtube: http://bit.ly/yabasub ¡Ya Basta! Records : http://www.yabasta-records.com/ http://www.facebook.com/yabastarecords http://twitter.com/YaBastarecords http://www.instagram.com/yabastarecords