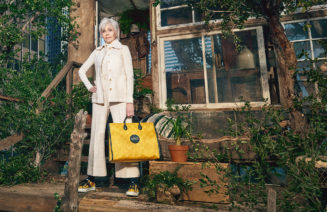 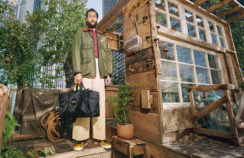 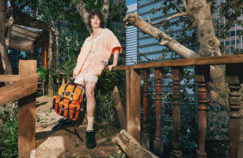 The Gucci Off The Grid collection uses recycled, organic, natural and sustainable materials, including ECONYL®, a regenerated nylon made from scrap materials and pre- and post-consumer waste, the collection is designed for those concerned about their impact on the environment. Circular lines is conceived by Alessandro Michele as an initiative to put in place the engagement of GUCCI in favour of circular production. The collection is about our need for nature and desire to travel be it real or imagined.

The campaign features a group of city dwellers who have taken up residence in a rustic hut built in a tree in the middle of a gigantic modern metropolis of concrete and glass. The striking contrast between the poorly built small wooden structure, its vegetation, its poorly assembled planks, and the smooth skyscrapers and vertical lines that eclipse it, evoke whimsical images. The tree house and the simple life it evokes becomes a powerful metaphor for the desire to escape convention and enjoy a more “Off The Grid”.

Alessandro Michele says: “The collection is the result of teamwork; everyone has contributed something.
And in the campaign too, there is this idea of dialogue between people to build something new. I have
imagined that we could build a tree house in the city centre, all together, like children…playing in the park. Because we all need to build this house or find out that our planet exists, even where it doesn’t seem to be there, or it’s far away. »
In this campaign in Los Angeles prior to the recent events, the shack residents form a group eclectic with: Jane Fonda, Oscar winning actress, producer, author and activist; Miyavi, guitarist, singer,  composer, producer and actor; David de Rothschild, environmental activist and explorer; Lil Nas X, laureate of several GRAMMY, rapper, singer and composer; and King Princess, singer, composer, instrumentalist and producer.

Sustainability – at all levels – goes hand in hand with respect: respect for the people with whom we share the
planet and respect for the environment. By lightening our environmental footprint, we can explore the world
greater freedom – the freedom to pursue our dreams with curiosity, open-mindedness and
happiness.