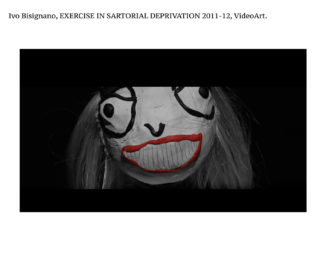 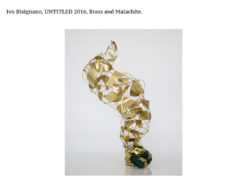 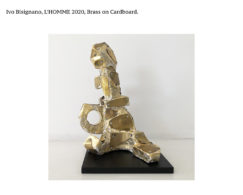 REGARDING THE ARTIST’S ABSENCE

In an era filled with art world spectacles where artists’ names are mentioned primarily in relation to investment and speculation, it is a profound pleasure to look through the remarkably sensitive drawings, sculpture, and film animations of the Italian-born, Israeli artist, Ivo Bisignano. The pleasure is in recognizing how intelligent and, in some ways, how instrumental his work appears as art. The more we look, the more we see. His forms are removed from working with a single medium. Instead his systemic, often playful emphasis is given to  experiential content. His art is purposefully filled with brilliant spatial intervals, expressive dynamics, and pulsating forms that emit vigor and contemplation. Regardless of the medium(s) in which he works, Bisignano’s images reveal visual commentaries that coincide with a fantastic theatricality that virtually underlies every aspect of his art.

In addition to his ingenious characterizations created through drawing and animation, the artist has recently created a major series of highly imaginative figurative sculptures — carved, constructed, and cast in materials ranging from oak wood to bronze. Ironically, he gives these ambiguous figures the somewhat somber title of Human Forms, many of which are accompanied by projected videos. Virtually all of them were completed in Bisignano’s Tel Aviv studio  between 2018 and 2019 and are considered some of his most intriguing, yet underrated work. Throughout his career, Bisignano has worked with different materials and forms in sculpture – particularly in the Human Forms series – where wooden figures stand vertically, yet emit an optical presence while circumventing their spatial ground. Aesthetically, these elegantly expressed figures are removed from all proscriptions. Ivo’s art may vacillate on different levels of emotion and rhetoric, but rarely relinquishes its visual elocution.

Moreover, they are seen as equal in finesse and quality to his often startling and entertaining film animations. This would be the case for his film, Exercise in Sartorial Deprivation (2011-12), Here Bisignano represents a curiously infinite narrative that moves indeterminately from frame to frame, almost without interruption. His made-up, puppet-like characters take us on a journey that represents various states of mind, both humorous and serious. The video was first publically shown at the Centre Pompidou in Paris where it won the prestigious Animation Award. It is worth noting that other animations have been honored and shown in various exhibitions throughout Europe. These would include Elsa’s Kitchen (2012), also awarded at the Pompidou, and Ticinum Opera (2017), screened in Pavia where Bisignano was given the title of Resident Artist. More recent film animations include two utterly charming works: a poignantly redolent, grid-structured film, titled Face (2018) and the inimitably abstract emotional Cry (2019).

Certainly the relationship between film and sculpture has been made in the past, whether in Russian Constructivism, Pop Art, or Abstract Expressionism. Bisignano’s sculptures are in some ways slightly divergent from his film animations to the extent that they require a different kind of attention given to their construction and use of materials. In his uniquely conceived Wave (2015), functions as a wall piece constructed with brass wire and cut brass shapes wherein the shadows on the wall behind these shapes become a distinct part of the sculpture. Another work, simply called Untitled (2016), is an upright vertical sculpture constructed with wire and numerous cut brass shapes. Here the artist has fastened a malachite stone at its base to hold this complex form in place. Finally, Snake (2017), which is suspended within a brass wire circle, includes similar brass shapes as in the two previous works. In Snake, however, the brass encases an actual ostrich egg, which finally becomes part of the sculpture.

Slightly earlier sculptures, such as Heart and Cyclist (both 2018), painted with acrylic on cardboard in  highly detailed optical patterns of black and white, reflect their theatricality as if an ideal circumference possessed them. In other words, these forms are meant to clarify the notion that art is not merely contextual in space but also understood through their objecthood. They exist not as trophies or monuments, but as carefully refined sculpture that reflects an augmented sense of being in the right place at the right time. Both of these works – Heart and Cyclist – are discreetly distilled forms that appear to tell a coincidental story removed from the weight of everyday life.

My point of reference in elation to these issues began during a time, not long ago, at the outset of my introduction to Bisignano’s art. I recall that my concerns were in the process of searching for a starting point as to where and how I might begin to write about his art and about position as an artist. My initial question was to answer the formidable question: What is the overall concern of this artist who appears to work outside the mainstream?  Would it be a singular concern or one that was open-ended echoing the sound of multiple inspirations? At the time, I meant to pose these questions less from a philosophical viewpoint than from an aesthetic one. I became curious as to how I might  receive Ivo’s work at any given moment, that is, how I would see it and come to terms with it and how it would take my mind to places elsewhere, places I have not been, whether in terms of geography, aesthetics, instrumentalism, or openly theatrical.

Along the way, I was introduced to a nearly classical term: “fashion archaeologist.” I found this both consistent and insightfully accurate with regard to Bisignano’s work. It was the perfect epithet. As an artist, there is little doubt that Ivo brings fashion into expressionism, and expressionism into art. At the same time, he coordinates a social scientific leap into the realm of archaeology – Why not?  The question that entered my mind was how to employ it in relation to my sense of critical consciousness. In fact, there are so many discreet aspects within the creative magnitude of Bisignano’s multi-layered work, one would need such a term to fully grasp and encompass a position that stretches between expressionism, fashion, and archaeology.

My sensibility suggested there were aspects of Ivo’s work that had over time become dematerialized and other aspects of his work that possessed something like an anthropomorphic nuance, a reference to the figure. But how?  In this context, I proposed to write a text in support of his work that represented forms that were indeed paradoxical, if not oxymoronic. I would have liked to place them sequentially in time, all of which alluding to statements verging on an absence of the figure, yet at the same time, re-inventing the idea of figuration in a way that would extend the evolving quandary of space. In doing so, I would hope to challenge the kind of viewer who was forever seeing art from the point of view of its presence. In contrast, I was beginning to understand Ivo’s art as dependent on absence in the sense that he was looking for something beyond the obvious that carried the possibility of a more consciously ethical dimension.

Ivo Bisignano’s sparse, mindful expressiveness welcomes a poetic form of communication, regardless of what material he uses or what medium he chooses for his work. I understand there is a subtle bifurcation between his interest in anthropomorphism and the Renaissance manner in which he chooses to work. In each case, Bisignano is engaging materials by allowing them to hover in an aura of blithe sophistication. I would read this as a complementary approach to materiality rather than a gesture of opposition. This quality is what gives the artist’s work a certain energy, an absence without surcease that holds a lingering after-effect, to be sure.

There can be no real, living art without doubt and without absence.

Throughout his work, regardless of the medium, Bisignano reveals an open mind, a thinking mind, which accounts for the work’s demeanor, in other words, something he might call anthropomorphic. This further offers a lingering sensibility that takes the viewer to unknown places in both mind and body, places that bear the mark of time as in the ongoing affects after a long journey of self-observation.

From a critical point of view, I see a series of visual concerns that operate on many levels simultaneously, which is what I distinctly receive from this artist’s deeply felt work. To put this in another context, the inspiration behind Bisignano’s work, despite the range of his conceptual and aesthetic involvement, is what  transforms his everyday reality of making things into a substantial formal nuance that reaches beyond itself into the realm on our everyday emotions.

It soon became apparent that Ivo’s was far more complex than I had imaged at the outset; and by being more complex it offered the opportunity to go more indefatigably into the stratosphere of my own existence – not merely as an art critic or historian – but as a person concerned with the significance of where art is moving in today’s technological wasteland. Clearly, there is no easy answer to this dilemma. For this, I am certain.

Even so, the time has arrived where we need artists with intrepid souls as well as an ability to bring ethics into aesthetics, as the philosopher Kant once made clear.  It is with considerable anticipation that I have looked at the work of Ivo Bisignano not merely from the point of view of Enlightenment philosophy, but from a deeper human understanding as to the kind of approach we need from artists today who are willing to unleash their inner-souls and imaginations and give us a sense of how we need to rediscover one another.

His art does not reject anything, because there is nothing to reject, Rather he confronts his world in a way that approaches form as a kind of spiritual physicality, that is, from the point of view of absence. This is the essence of his art. It is here that I find in Bisignano a state of being focused on the revival of space. It is through absence that he is able to create. As a result, the artist becomes his own missing figure that transcends the glut of information in favor of what we might call real communication.

Robert C. Morgan, Ph.D. is a critic, painter, art historian, and curator. Author of several books and translations and a contributor to The Brooklyn Rail and artcritical.com, he teaches art history at the School of Visual Arts in New York.