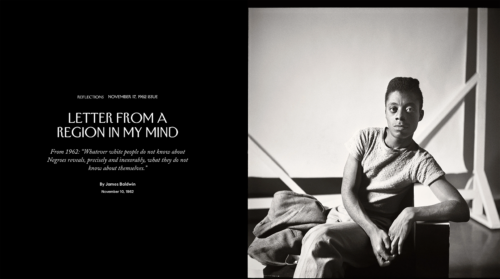 I underwent, during the summer that I became fourteen, a prolonged religious crisis. I use “religious” in the common, and arbitrary, sense, meaning that I then discovered God, His saints and angels, and His blazing Hell. And since I had been born in a Christian nation, I accepted this Deity as the only one. I supposed Him to exist only within the walls of a church—in fact, of our church—and I also supposed that God and safety were synonymous. The word “safety” brings us to the real meaning of the word “religious” as we use it. Therefore, to state it in another, more accurate way, I became, during my fourteenth year, for the first time in my life, afraid—afraid of the evil within me and afraid of the evil without. What I saw around me that summer in Harlem was what I had always seen; nothing had changed. But now, without any warning, the whores and pimps and racketeers on the Avenue had become a personal menace. It had not before occurred to me that I could become one of them, but now I realized that we had been produced by the same circumstances. Many of my comrades were clearly headed for the Avenue, and my father said that I was headed that way, too. My friends began to drink and smoke, and embarked—at first avid, then groaning—on their sexual careers. Girls, only slightly older than I was, who sang in the choir or taught Sunday school, the children of holy parents, underwent, before my eyes, their incredible metamorphosis, of which the most bewildering aspect was not their budding breasts or their rounding behinds but something deeper and more subtle, in their eyes, their heat, their odor, and the inflection of their voices. Like the strangers on the Avenue, they became, in the twinkling of an eye, unutterably different and fantastically present. Owing to the way I had been raised, the abrupt discomfort that all this aroused in me and the fact that I had no idea what my voice or my mind or my body was likely to do next caused me to consider myself one of the most depraved people on earth. Matters were not helped by the fact that these holy girls seemed rather to enjoy my terrified lapses, our grim, guilty, tormented experiments, which were at once as chill and joyless as the Russian steppes and hotter, by far, than all the fires of Hell.

Yet there was something deeper than these changes, and less definable, that frightened me. It was real in both the boys and the girls, but it was, somehow, more vivid in the boys. In the case of the girls, one watched them turning into matrons before they had become women. They began to manifest a curious and really rather terrifying single-mindedness. It is hard to say exactly how this was conveyed: something implacable in the set of the lips, something farseeing (seeing what?) in the eyes, some new and crushing determination in the walk, something peremptory in the voice. They did not tease us, the boys, any more; they reprimanded us sharply, saying, “You better be thinking about your soul!” For the girls also saw the evidence on the Avenue, knew what the price would be, for them, of one misstep, knew that they had to be protected and that we were the only protection there was. They understood that they must act as God’s decoys, saving the souls of the boys for Jesus and binding the bodies of the boys in marriage. For this was the beginning of our burning time, and “It is better,” said St. Paul—who elsewhere, with a most unusual and stunning exactness, described himself as a “wretched man”—“to marry than to burn.” And I began to feel in the boys a curious, wary, bewildered despair, as though they were now settling in for the long, hard winter of life. I did not know then what it was that I was reacting to; I put it to myself that they were letting themselves go. In the same way that the girls were destined to gain as much weight as their mothers, the boys, it was clear, would rise no higher than their fathers. School began to reveal itself, therefore, as a child’s game that one could not win, and boys dropped out of school and went to work. My father wanted me to do the same. I refused, even though I no longer had any illusions about what an education could do for me; I had already encountered too many college-graduate handymen. My friends were now “downtown,” busy, as they put it, “fighting the man.” They began to care less about the way they looked, the way they dressed, the things they did; presently, one found them in twos and threes and fours, in a hallway, sharing a jug of wine or a bottle of whiskey, talking, cursing, fighting, sometimes weeping: lost, and unable to say what it was that oppressed them, except that they knew it was “the man”—the white man. And there seemed to be no way whatever to remove this cloud that stood between them and the sun, between them and love and life and power, between them and whatever it was that they wanted. One did not have to be very bright to realize how little one could do to change one’s situation; one did not have to be abnormally sensitive to be worn down to a cutting edge by the incessant and gratuitous humiliation and danger one encountered every working day, all day long. The humiliation did not apply merely to working days, or workers; I was thirteen and was crossing Fifth Avenue on my way to the Forty-second Street library, and the cop in the middle of the street muttered as I passed him, “Why don’t you niggers stay uptown where you belong?” When I was ten, and didn’t look, certainly, any older, two policemen amused themselves with me by frisking me, making comic (and terrifying) speculations concerning my ancestry and probable sexual prowess, and, for good measure, leaving me flat on my back in one of Harlem’s empty lots. Just before and then during the Second World War, many of my friends fled into the service, all to be changed there, and rarely for the better, many to be ruined, and many to die. Others fled to other states and cities—that is, to other ghettos. Some went on wine or whiskey or the needle, and are still on it. And others, like me, fled into the church.