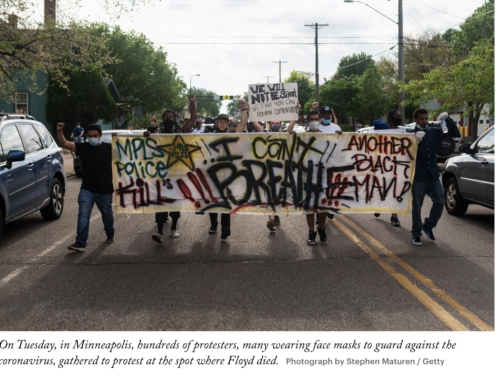 Two incidents separated by twelve hours and twelve hundred miles have taken on the appearance of the control and the variable in a grotesque experiment about race in America. On Monday morning, in New York City’s Central Park, a white woman named Amy Cooper called 911 and told the dispatcher that an African-American man was threatening her. The man she was talking about, Christian Cooper, who is no relation, filmed the call on his phone. They were in the Ramble, a part of the park favored by bird-watchers, including Christian Cooper, and he had simply requested that she leash her dog—something that is required in the area. In the video, before making the call, Ms. Cooper warns Mr. Cooper that she is “going to tell them there’s an African-American man threatening my life.” Her needless inclusion of the race of the man she fears serves only to summon the ancient impulse to protect white womanhood from the threats posed by black men. For anyone with a long enough memory or a recent enough viewing of the series “When They See Us,” the locale of this altercation becomes part of the story: we know what happened to five young black and brown men who were falsely accused of attacking a white woman in Central Park.

On Monday evening, in Minneapolis, Minnesota, a forty-six-year-old black man named George Floyd died in a way that highlighted the implications that calls such as the one Amy Cooper placed can have; George Floyd is who Christian Cooper might have been. (The police made no arrests and filed no summons in Central Park. Amy Cooper has apologized for her actions; she was also fired from her job.) Police responding to a call from a shopkeeper, about someone trying to pass a potentially counterfeit bill, arrested Floyd. Surveillance video shows a compliant man being led away in handcuffs. But cellphone video later shows a white police officer kneeling on Floyd’s neck for seven minutes, despite protests from onlookers that his life is in jeopardy. In an echo of the police killing of Eric Garner, in 2014, Floyd repeatedly says, “I can’t breathe,” and then, “I’m about to die.” When the officer eventually removes his knee, Floyd’s body is limp and unresponsive. A person nearby can be heard saying, “They just killed him.” Floyd was taken to a hospital, where he was pronounced dead. A police statement saids that Floyd appeared to be in “medical distress,” but made no mention of his being pinned to the ground with the weight of a police officer compressing his airway.

The video of Floyd’s death is horrific but not surprising; terrible but not unusual, depicting a kind of incident that is periodically reënacted in the United States. It’s both necessary and, at this point, pedestrian to observe that policing in this country is mediated by race. On Tuesday, in Minneapolis, hundreds of protesters, many wearing face masks to guard against covid-19, braved the pandemic to protest at the spot where Floyd died. Outside a nearby precinct house, police cars were pelted with rocks, and officers responded by firing tear gas. But, within twenty-four hours of the video coming to light, the Minneapolis Police Department fired the officer who had knelt on Floyd and three others who had been at the scene. Mayor Jacob Frey tweeted that the firings were “the right call,” but here, too, context matters.

In November, 2015, police responding to calls of a dispute between a man and a woman in north Minneapolis fatally shot a twenty-four-year-old African-American man named Jamar Clark. Police and paramedics on the scene claimed that Clark had resisted arrest and had attempted to grab an officer’s gun; bystanders claimed that he was handcuffed and on the ground when the shot was fired. Clark’s death was followed by more than two weeks of demonstrations outside the Fourth Police Precinct in Minneapolis, led by Black Lives Matter; an attempt to disrupt holiday shopping at the Mall of America, in protest; and cascading contempt from black residents that, two years later, factored into Mayor Betsy Hodges losing her reëlection bid. In light of that history, Frey has been unequivocal about police culpability in Floyd’s death. “Being black in America should not be a death sentence,” he said on Tuesday.

The larger question, however, is whether the officers involved will face any legal consequences. The Twin Cities area has been an outsized part of the dialogue about the police use of force. The year after Clark’s death, Philando Castile was fatally shot in Falcon Heights, Minnesota, by a police officer who was alarmed because Castile had a gun in his car, even though he had identified himself as a licensed gun owner. (Castile’s girlfriend recorded the aftermath of shooting on her phone.) In 2017, Justine Damond was fatally shot by a police officer who was responding to her own call about a possible assault taking place behind her Minneapolis home. No charges were brought against officers in Clark’s death. Jeronimo Yanez, the officer who killed Castile, was fired from the department, but was acquitted of second-degree-manslaughter charges. Mohamed Noor, the officer who shot Damond, was convicted of third-degree murder and second-degree manslaughter, and was sentenced to twelve and a half years in prison. The Damond case was atypical, both in that it involved the fatal shooting of a white woman by a black officer of Somali descent, and that Damond was an Australian citizen, which generated international pressure for a conviction in the case. No charges were brought against Officer Daniel Pantaleo in the death of Eric Garner, on Staten Island, whose arrest was also recorded on video by a bystander, and has been widely referenced since Floyd’s death. (He was fired from the department in 2019.) By odd coincidence,“American Trial,” a film that features a mock trial of Pantaleo for murder, was just released.

The investigation into Floyd’s death also exists in the context of an ongoing investigation into the death of Ahmaud Arbery, a twenty-five-year-old African-American who was shot in southeast Georgia when two men attempted to enact a citizen’s arrest while a third recorded a video of the incident. There is yet another investigation of fatal police force in Louisville, Kentucky, where Breonna Taylor, a twenty-six-year-old African-American E.M.T., was shot to death in her apartment by officers who were conducting a drug raid at what her family said was the wrong address.