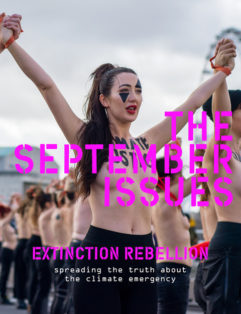 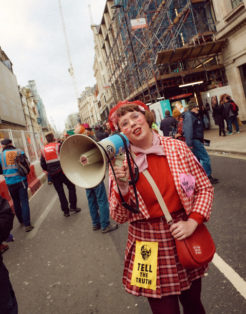 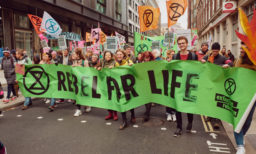 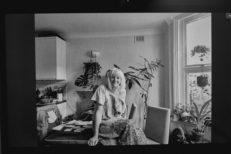 Clare Farrell who was photographed (By Trish Ward) and interviewed for the issue at her home via Zoom under lockdown.

Extinction Rebellion is an official rebellion against governments and organized groups who contribute to the decline of our environmental reality. Too long have people fought for a greener, better future for our planet. Too many promises have been made and broken. The loss of biodiversity has rendered land uninhabitable and unfarmable. There is a massive climate breakdown raising temperatures every year. And each year, more and more natural disasters occur. Many current forms of life will be extinct by the end of this century, and humankind—or at least our way of life—is included in that. Everything about our consumer-driven lifestyles interferes with our environments. Even if we survive, our lands will be ruined and we will starve. There is no time to wait. The time to rise up is now.

– the issue features a shoot and interview with some of the many activist’s that make up XR and one of its founders – Clare Farrell who was photographed (By Trish Ward) and interviewed for the issue at her home via Zoom under lockdown.

Farrell talks to the biannual about how many forms of life will be extinct by the end of the century and humankind or at least our way of life being included in this.
“The consumption and production of the fashion industry, and all industry, carries in it a microcosm of the environmental crisis. Resources, pollution, work conditions, waste, all play a part”.
“If you grow your economy by 3% every year, then by the end of a century your economy would be 32 times larger than it was at the beginning. So if … we are fighting to make that a reality, then we want an economy that is 32 times bigger than it was in the year 2000. And that’s just something that will kill everyone.”
“The problem is that now it isn’t about an alternate future, generations and conceptions of self from now, it is in our lifetimes”. the great writer Albert Camus said: “Probably every generation sees itself as charged with remaking the world. Mine, however, knows that it will not remake the world… it consists in keeping the world from destroying itself.
“The common thread between all of these demands is the dissemination of knowledge and the people’s right to have a hand in their own futures”.
“Extinction Rebellion, off the streets, is a place where rebels can connect, learn, and organize. This community represents people of many different origins all united by the environmental crisis”.
“This pandemic is indicative of what a massive environmental crisis could do to our society. But it also shows how humans are entirely capable of altering their lifestyles to benefit themselves and the community. There is optimism in society’s ability to react, to slow down our lives, and begin to invest our resources into alternative ways of living”.
“We can do this, we can live in a way that could save our planet. The power of the people is clear, now more than ever. It is time for leaders to meet the demands that could radically shift the future. Not just the far off future, but the impending one. The rebellion is knocking on their doors, they are blocking their streets, spamming their feeds. There is no time to wait”.
https://www.theseptemberissues.com/extinction-rebellion/