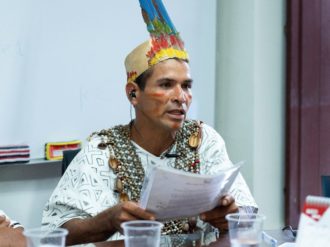 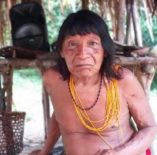 Berta Caceres at the banks of the Gualcarque River in the Rio Blanco region of western Honduras where she, COPINH (the Council of Popular and Indigenous Organizations of Honduras) and the people of Rio Blanco have maintained a two year struggle to halt construction on the Agua Zarca Hydroelectric project, that poses grave threats to local environment, river and indigenous Lenca people from the region. 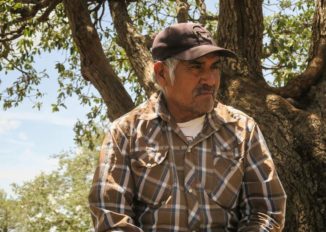 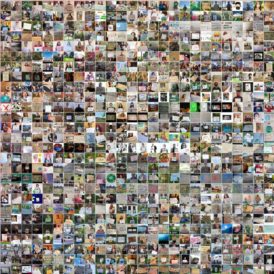 Fridays For Future Digital, part of the global Fridays for Future movement called into life by Greta Thunberg, Polluters Out, and Extinction Rebellion are starting a massive 8-week digital campaign, to raise awareness about how the climate crisis disproportionately affects indigenous communities and environmental defenders. Each week will focus on different regions of the world and how they have been affected. Week 1 will focus on Latin America, week 2 will be Sub-Saharan Africa, week 3 will be North Africa + the Middle East, week 4 will be Central + South Asia, week 5 will be Oceania, week 6 will be Southeast + East Asia, week 7 is North America, and week 8 is Europe + Russia.

Indigenous peoples’ land rights are codified on an international level, but they are often overlooked or completely ignored by governments in favour of short-term economic or industrial gains. Indigenous people are ignored and marginalized in decision-making processes, and societal marginalization allows violence against indigenous communities to continue with impunity. Their right to self-determination is undermined by a lack of political representation, threats to revoke  land rights, and limited  access to social services. Despite ongoing attacks on the sovereignty of these communities, indigenous peoples care for and protect nearly 22% of the Earth’s surface and 80% of the planet’s remaining biodiversity despite making up 5% of the world population. The world needs indigenous knowledge to combat the climate crisis. Without protection by indigenous people, Earth’s ecosystems do not stand a chance against it. Therefore, we must do everything we can to #DefendtheDefenders.

“Climate justice must represent social justice. Climate defenders, especially those from disadvantaged communities and the Global South, are raising their voices against the injustice of paying a debt that is not theirs, of suffering the effects of the climate crisis that we did not produce. Many of them are murdered, silenced and suppressed, because in our nations the polluters are the ones with privileges. We have to make their fight worthwhile,” said Leila Escobar, an activist from Peru.

Drilling and mining projects endanger the health and safety of indigenous communities across the world. 70-80% of the 370 million indigenous peoples worldwide live in Asia and Pacific island nations which are exceptionally vulnerable to the effects of climate change, despite their minimal contribution to it. The Philippines is the most dangerous country for environmental defenders.

“Stop the killings. Do not disregard human rights. It is only our right to have education, we should not be targeted because of that,” said Jinky Malibato, a 19 year old Lumad activist. “We fight for our ancestral land because we inherit it from our forefathers. To fight for education and our land is just.”

In the past, collaborations between FFF Digital and Polluters Out have brought amazing results. On the March 20th International Day of Action, thousands of people engaged in the action which included a Twitter storm, profile picture campaign, cyber storm, webinars, and a digital strike.

During the course of the 8-week campaign, Polluters Out and FFF Digital are calling for people all over the world to join a series of digital actions,  which involve showing solidarity with the movement by taking  pictures of themselves holding a sign with the #DefendtheDefenders theme . Additionally, there will be live streams and webinars on various topics regarding environmental defenders. We encourage all who participate to contribute to Twitter storms,  putting pressure on governments and corporations to demand that swift actions are taken to safeguard indigenous peoples’ sustainable ways of life, and to protect those who put their lives on the line in order to fight the climate crisis. We are working alongside indigenous activists and groups on these actions to  draw attention to the failure of governments worldwide to protect the rights of environmental defenders  to raise their voices without fear of retribution.