Maria de Medeiros on vocals, and Jefferson Feliciano on guitar

Minha comandante – Music and lyrics by Jefferson Feliciano. With my daughter Julia Camps on vocals.

Maria de Medeiros and Julia Camps on vocals, and Jefferson Feliciano on guitar

Maria de Medeiros on vocals, and Jefferson Feliciano on guitar

During lockdown Maria de Medeiros and Jefferson Feliciano created and posted these videos between the end of March and May 2020. I met Maria when I was the costume designer, dressing her and the director, Arnold Barkus in his 1996 film Tempete dans un verre d’eau. We’ve been friends ever since. In 2007 she was awarded artist for peace l’UNESCO. If you do not know her 119 credits as an actress you for sure remember her as the girlfriend of Bruce Willis, blueberry pancakes, in Pulp Fiction. The first feature film that she directed was in the officiel selection at Cannes in 2000 Captaines d’Avril and she played Anais Nin  in Henry and June.

My personal favourite was her documentary on the festival of Cannes and the relationship between the directors and the film critics. It is soooo good. Je t’aime moi non plus . 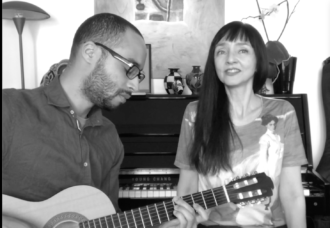