“Ethereal”and “practical” could be two words best used to describe Lidija Kolovrat’s latest collection, whose key goal was to explore sportswear through the eyes of Couture and handicraft. Opening the show with a draped chiffon dress, worn with a chunky pair of pink sneakers, Kolovrat was looking for a balance between utility and refinement, modernity and tradition. The best pieces were the ones hinting at work wear, but made in deluxe materials, such as a stunning oversize jumpsuit or a silver draped dress that looked like a simple t-shirt. Sportswear has been referenced so often in fashion lately that most designers started exploring other avenues, but Kolovrat managed to make its codes look elegant and strangely sophisticated. Shimmery fabrics and transparent textures added prettiness and fragility to some of her most sensual pieces, making them light and delicate. The message seemed to be that the heavier life becomes, the lighter our clothes should be, perhaps to give us room to breathe and feel at peace within ourselves. Serenity was, in fact, an ongoing sensation you couldn’t help but feel during her show, and it was fascinating how the designer managed to infuse some of her garments with spiritual strength. 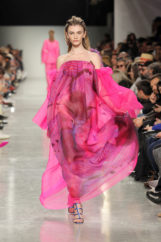 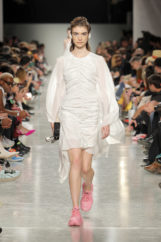 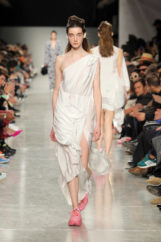