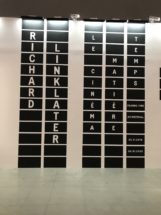 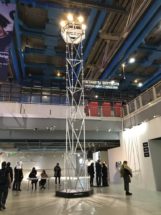 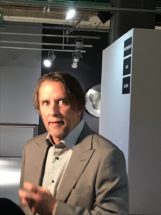 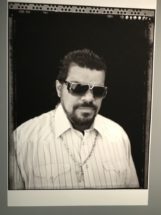 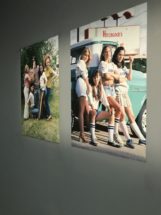 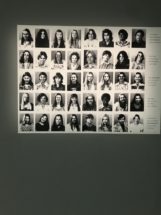 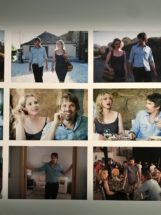 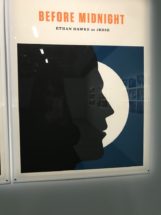 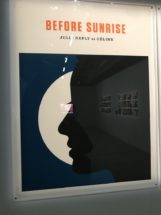 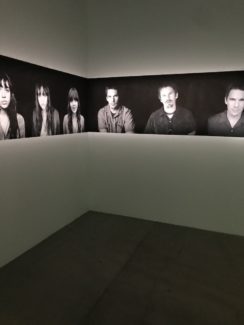 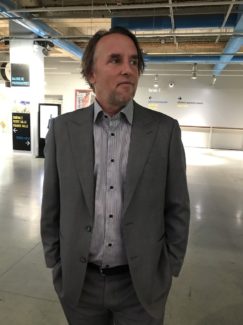 I got to preview  Richard Linklater’s exhibition at Centre Pompidou yesterday and what a pleasure,  Richard Linklater was our guide. We followed him as he walked us through the rooms with photographs and walls of films. Sometimes it felt like he was discovering the exhibition at the same time as we were. There is one 4 hour film that I’m sure you will not watch and really you only need to watch a bit of it as it contains years of countdowns from 16 mm films in black and white complete with dust, grain and the occasional frame.

Linklater is based in Austin, Texas and that is where he shoots most of films, there and Colorado. He has no desire to be in LA, he and Lee Daniel founded the Austin Film Society in 1985 where you can see experimental, foreign independant films that were not available before in Austin. Austin Film Society is one of the largest film societies in the US.  The non-profit is used for educational purposes, has a theatre, screening rooms, gives a grant to filmmakers and manages 3 public tv stations.

As we walked through Linklater gave us little stories about film moments.  One story was about the slaughter house in the film Fast Food Nation. The US would not let him film in any of the slaughter houses so he went over to Mexico where they did not have a problem with it especially when he told them that it was about how the US mistreats immigrant workers. Another story related to the light tower that you see just outside of  the exhibition. The actual towers were built all over the downtown area of Austin in 1894 because of a rather morbid story about the serial killer that was loose in Austin striking at night in the dark, they were called the famous shop girl murders. Eventually the lanterns were replaced by electric lights. He recreated one in Dazed and Confused.

Linklater is self-taught, he is obsessively motivated and considers he went to the Stanley Kubrick film school watching  thousands of films some of  his favourites are  Raging Bull, Taxi Driver, Some Came Running, Pickpocket, Eraserhead, Psycho, Barry Lyndon.   He watched at least three films a day and wanted to make his own so he bought a camera so he could do it on his own. Self taught he learned to do everything from recording the sound, shooting, lighting and editing.

Currently he is working on two films one is about growing up in Austin in the Apollo  era and the first man on the moon landing. The other film is a screen adaptation of the short-lived Stephen Sondheim musical starring Ben Platt, Beanie Feldstein and Blake Jenner.  Merrily We Roll Along was a flop on Broadway when it opened in 1981 but Linklater has been obsessed with it for the past 30 years. The film will be made over a twenty year period shot  in 9 parts the musical moves in reverse, he just finished filming the ending. This film will take 20 years which is longer than Boyhood which was shot over 12 years. He said his cast will be middle age by the time the film is finished and he’ll be old..he’s 59 now. Sondheim gave his blessings and Linklater feels there is no better way to spend the next 20 years than in the world of Stephan Sondheim.

I was waiting for the AFP to finish their interview before asking a few questions but had to disappear for a few minutes and by the time I came back Linklater had disappeared. He must have been taken a break before the next group of journalists came followed by the public. You might enjoy the interview by Fiachra Gibbons from AFP: https://www.france24.com/en/20191126-trump-s-narcissism-only-thing-saving-us-says-top-director#_=_