The word ‘sustainability’ is probably the one that was mentioned the most within fashion circles throughout 2019, leading to countless discussions about how to inject more responsibility and ethics into the world’s second most polluting industry. Many designers feel compelled to address what they see as being sustainable and Lidija Kolovrat gave her own interpretation of the issues at stake during the last edition of MODALISBOA. In touch with ecology and the environment, the Lisbon-based designer uses nature often in her collections, which refer to animals directly, as well as our relationship towards the ecosystem. This time, she created a conceptual print depicting waves of rubbish and waste, placing it on elegantly pleated dresses, plain t-shirts or a kimono-inspired shirt dress. If the print was playful, it nevertheless acted as a potent reminder of the ways in which we harm the planet through excessive consumption. On the menswear front, the designer underlined protection and ease, with oversize suiting and separates that recalled the deconstructed nonchalance of Japanese brands in the 1980s. Of course, Kolovrat knows how to do drama, and her fuchsia evening asymmetrical dress was a standout. Next year, she will celebrate the 30th anniversary of her brand, quite an achievement for such an artistically driven designer. 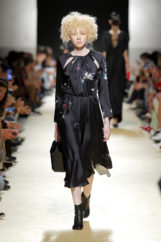 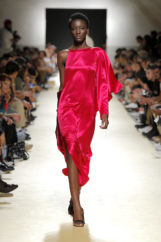 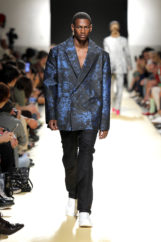