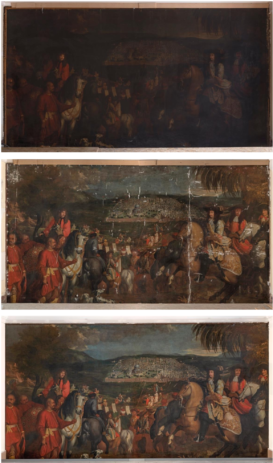 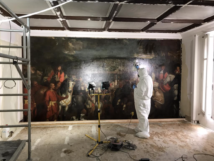 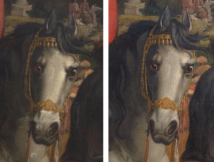 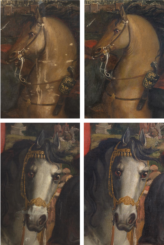 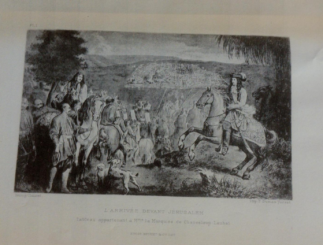 Last week I went to visit Kattia Ballon at the Oscar de la Renta boutique in Paris. After going through the collection she took me through the oil canvas by Arnould de Vuez which was discovered during the renovation of the boutique. It is attached to the wall and cannot be removed. The restoration had five parts, the component materials: support layer, the Marouflage technique, the ground layer, pictorial layer, varnish layer and past interventions. The painting was discovered at 4 rue de Marignan and had been previously hidden by a wall, and was the subject of a historical, technical and scientific examination. The work dates back to several centuries ago and the conservation treatment was specifically designed in the aim of slowing down the ageing process of the work of art and recover an aesthetic unity and integrity. The first examination of the work was by Mr. Didier GRIFFE and Mr. Stephane PINTA in August 2018 at which time the work was dated and the subject identified as an equestrian portrait of Nointel, ambassador of Louis the 14th in the Levant, in front of the city of Jerusalem, with horsemen, cortege of oriental figures, welcoming the embassy at the city entrance with banners and presents. It was attributed to Arnould De Vuez (1644-1720). The painting was dated from 1674. The surface had blackened with time. Analyses carried out include x-ray fluorescent spectroscopy (XRF) scanning electron microscopy (SEM), Fourier transformed infrared spectrometry (FTIR), Raman microscopy and multispectral imagery. They contributed to the identification of the nature of the fibres, pigments and binder, etc. As you might imagine the restoration took over one year. A photographic record of the installation and preparation was taken by Jean-Louis Losi who took images at different stages of the restoration. Most important was to maintain the overall integrity of the painting.

The scientific analyses made it possible to determine the nature of the composing materials. The data served as a guideline for the dating of the work as well as to understand the creative process and technique of the artist. The months of work were the opportunity to discover a masterful painting and its historical significance and the mystery surrounding its reappearance. If this interests you, visit the Oscar de la Renta boutique and discover it for yourself.