It’s funny to think that -at the beginning of the 1990s- people were predicting the imminent death of Haute Couture and that its clientele would shrink and eventually disappear. Turns out the opposite happened, and a wealthy customer developed a new hunger for the painstakingly handmade and experimental spirit of Couture. In Belgium, self-taught and Wavre-based designer Bernard Depoorter launched his own maison in 2003. He had previously worked for Christian Dior and Stéphane Rolland and took his last collection to Paris in front of an audience of clients, friends and celebrities. The Belgian had art on his mind, particularly the geometric and erotic works of Amedeo Modigliani, as well as the broody paintings of Pierre Soulages. As you’d expect it, black dominated the color palette, but Depoorter used enough textures and different techniques to keep his audience guessing. His treatment of leather was outstanding, from carved bustiers and embellished dresses to fitted jackets and pleated skirts. The leather added sensuality and danger to his most structured looks, while transparency and feathers appeared on some of the evening looks. Despite being in his 30s, Depoorter favors a strict and controlled silhouette, which focuses on daywear. His work felt undeniably Belgian, underlining the sharpness of his lines rather than frivolous decoration. 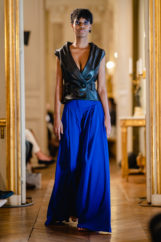 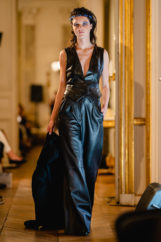 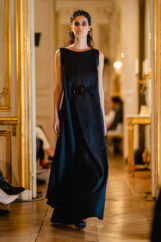 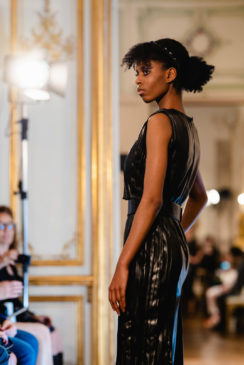 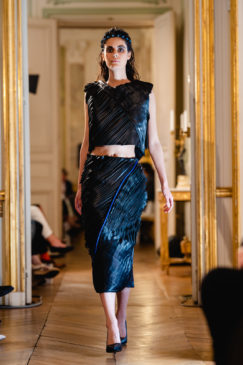 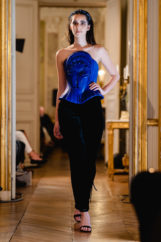 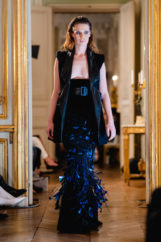 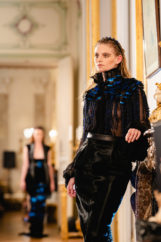