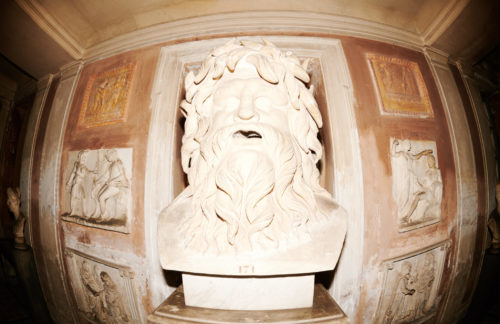 Alessandro Michele never ceases to surprise and delight me, this time with his choice of Yorgos Lanthimos to photograph his 2020 Cruise collection in the gallery Léda de la villa Albani-Torlonia . The gallery is built on the grounds of the villa and is a dream of classicism with the art works dreamily organised as a journey of rediscovery.

The villa Albani-Torlonia was built in the middle of the eighteenth century by the architect Carlo Marchionni from a choral project influenced by personalities such as Giovanni Battista Nolli, Giovanni Battista Piranesi and Johann Joachim Winckelmann for the artworks cataloged by cardinal Alessandro Albani, nephew of Pope Clement XI.

Léda and the Swan is a Roman copy from the first century of a Greek statue dating back to the fourth century BC attributed to Timothée. The marble sculpture in the center of the Léda gallery was discovered on the Palatine Hill in Rome accompanied by a replica. Probably the two versions were ordered for the sake of symmetry as a decorative idea specific to antiquity whose value we only understand today.

If you remember the exhibition in Shanghai when Alessandro Michele collaborated with Maurizio Cattelan for The Artis is Present you remember that point of the exhibition was to start a dialogue about ‘the originality and the copy’, and to explore every interpretation of the concept of originality. The point then was to change our minds about the ideas of originality and authorship. With this new art book Alessandro Michele has sought to magnify the importance of the value of the copy, sometimes more authentic and real than its original.

The artbook will be published in November 2019 and distributed by London-based independent publisher IDEA Books. It will also be available at Florence’s Gucci Garden and Gucci Wooster Bookstore in New York.

The project will restore the Léda  gallery of the villa Albani-Torlonia.