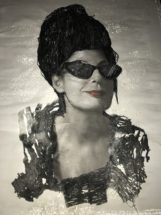 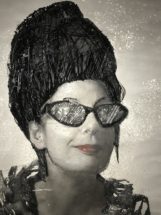 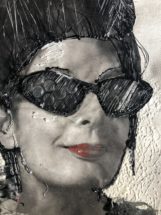 A lovely surprise today, Alice Passadore, a 3D artist from Genoa sent me  a portrait she made of me. It came out of nowhere so of course I was curious to know who Blejzka was. This is what I found out: she is from Genoa and used to collaborate as a graphic artist with various agencies and studios situated in Milan, specifically for Walt Disney books and records as an art director. She was an assistant at the studios of Origoni and Steiner architects in Milan for several years where she worked on an installation with Gold Compass, Renzo Piano Building Workshop, Milan Triennale and Verona Museum. After a year in the states at Grafco graphic studio in San Francisco as a web and visual designer, she became a founding partner of Magut Design Milan for 3 years.

She returned to Genoa where she grew up and continued her activity with the Milan studios and animation projects for Warner Bros CD educational. In the last period she’d been collaborating with Lix pen by designing 3D pen drawings, paintings and creating graphics for fashion application with the same technology.

Now she is trying to organise a collective with 3D pen artists that she finds interesting.