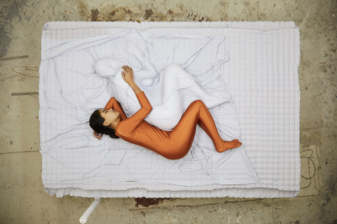 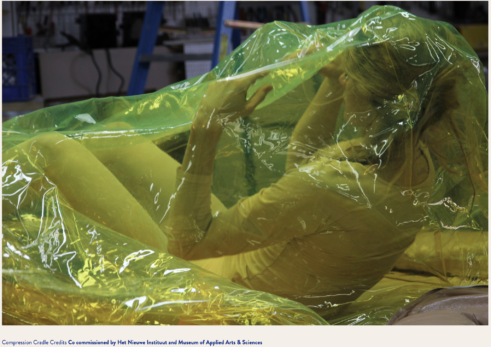 Lucy McRae is a visionary artist from Australia that has periodically had films in ASVOFF. Compression Cradle is a futuristic approach to preparing the self for a future that assumes a lack of human touch and the machine affectionately squeezes the body with a sequence of aerated volumes that hold you tight. As McRae envisions it the mechanical touch may be an antidote for today’s ‘forever connectedness’, a behaviour that’s triggered a lonely disconnection with ourselves.

“Through a choreography of touch sensations, this mechanism assists in altering the expression of oxytocin — the hormone released in the brain, responsible for building trust and pair bonding.

Compression Cradle looks like a remnant from a world we have not yet seen but might soon inhabit. One where mechanical touch may be an antidote for today’s ‘forever connectedness’, a behaviour that’s triggered a lonely disconnection with ourselves.

The visual appearance of this artwork begs the question is this a device for sleeping, for pleasure or for performance? This innovation blurs the boundaries between entertainment and domestic space, presenting an indifferent format of voyeurism.”

Lucy McCrae will be at the Dutch Pavillion at Triennale Milan and you can book a personalised appointment.

The artwork was co-commissioned by Het Nieuwe Instituut and Museum of Applied Arts & Sciences.