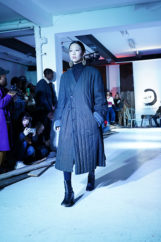 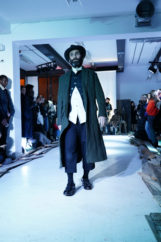 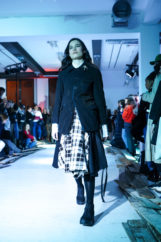 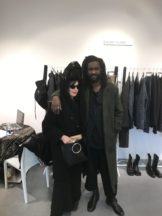 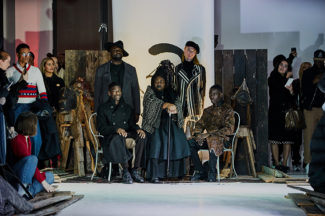 I have believed in sustainability long before it became a trend. Did you know that thanks to fast fashion most people only wear their clothes seven times before they throw them away and where do they go? Landfill otherwise known as a dumping ground for the disposal of waste materials. This oldest form of waste treatment buries piles of refuse. Many designers take that in mind and what they do is re-purpose old materials or cut up old garments and put them back into circulation  which is a positive approach to the problem. The old adage ‘buy better buy less” never rang so true. One designer that I met during Paris Fashion Week was Largos born, Glasgow raised and London based designer Olubiyi ‘B’ Thomas.   Thomas attended Central Saint Martins from 2010-2013 and graduated from the BA program using his fine arts skills to bring a fresh perspective to his fashion designs.

After working at Alexander McQueen in London and Siki in New York , Thomas became creative director at a London label De Rien before launching his namesake label in June 2016. Thomas’ approach is artisanal and textile driven. He’s a traveller and picks up textiles and inspiration along the way. He told me a funny story when he was in Viet Nam at a fabric shop. The owner showed him all that she had but what caught his eye was the cloth she was sitting on. It was quilted by hand. He dyed it and repurposed it into well cut coats that are as timeless as they are traditional. Thomas does not care about trends, he just makes great looking and timeless no gender clothes. He absolutely did not want to be my model but the model was unavailable and frankly no one could look better in the designs than the designer himself, don’t you agree?