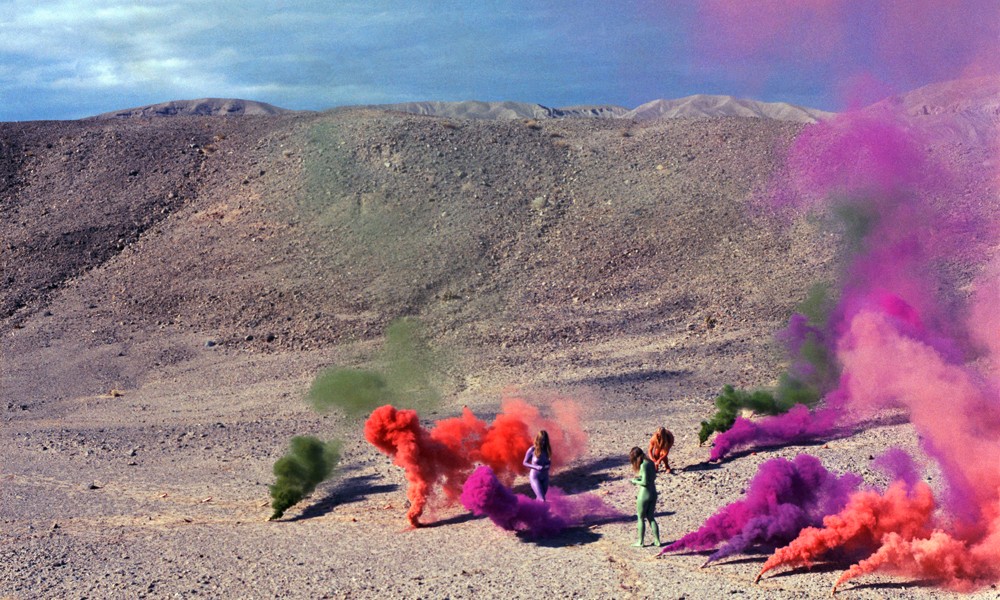 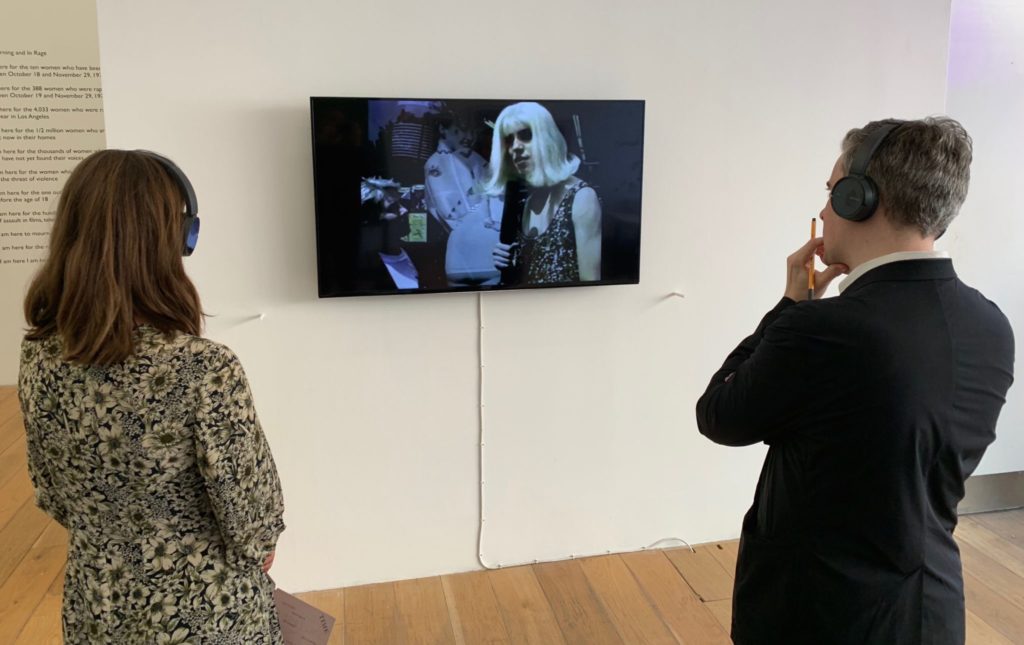 Recently, I took a trip to the lovely city of Nottingham, located in England’s East Midlands, to attend the opening of an exhibition featuring over 100 works by 50 women (or, as the curators prefer, “womxn”), queer and non-binary artists. I am mighty proud to have my video Glennda and Camille Do Downtown, co-starring Camille Paglia, included in this show, thanks to co-curator Cédric Fauq who saw my video at a screening somewhere in the UK, in 2015. Refreshingly, the exhibition represents various viewpoints of feminism without getting mired down in which “waves” each one belongs to.

The other curators of Still I Rise are Irene Aristizábal (who is also Head of Exhibitions at Nottingham Contemporary) and Rosie Cooper of the De La Warr Pavilion on England’s southern coast. Still I Rise is up through January 27, 2019 and then in February it moves to the De La Warr Pavilion, an iconic modernist building (the show will be expanded with work about design and architecture).

The show’s title is, of course, taken from Maya Angelou’s famous poem.

You may write me down in history
With your bitter, twisted lies,
You may trod me in the very dirt
But still, like dust, I’ll rise.
(excerpt) 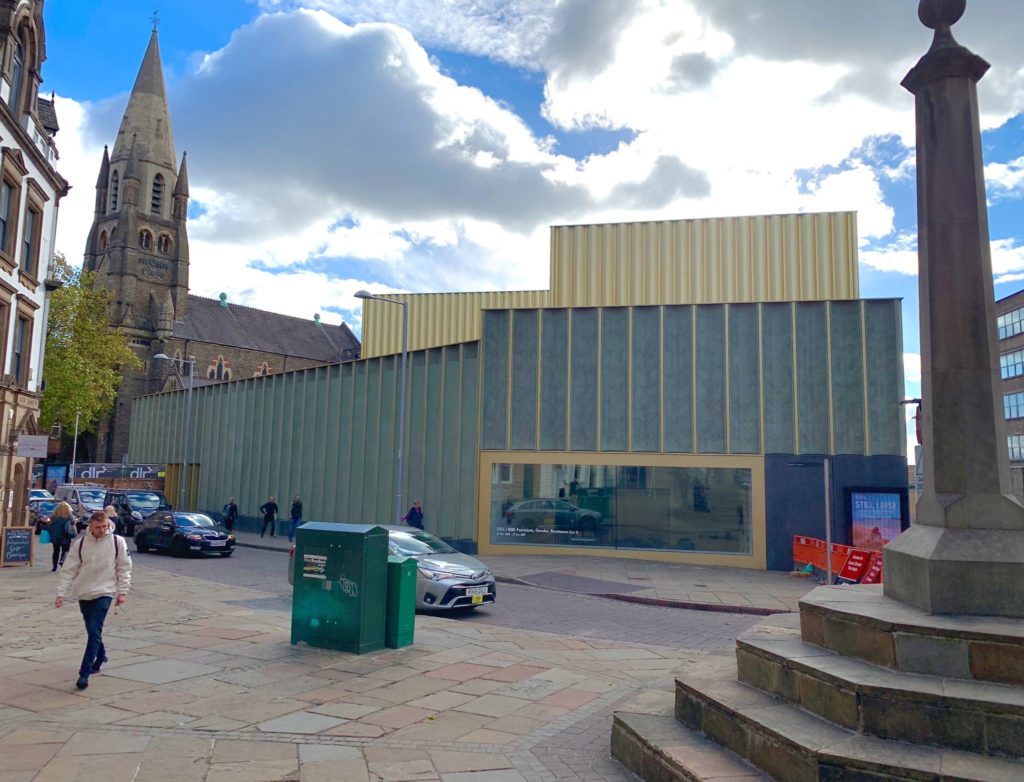 Nottingham Contemporary. It features, if I remember correctly, five large galleries, including one used as a performance space. Admission is free. 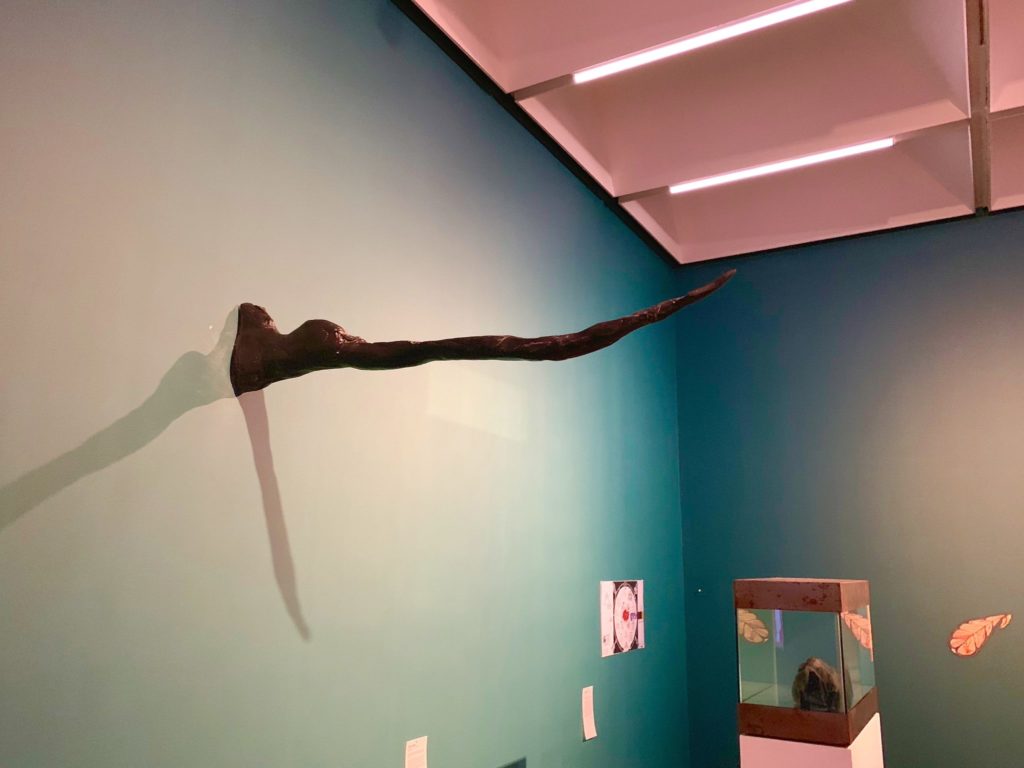 This delightfully sinister sculpture by Jala Wahid (whom I had the pleasure of sitting next to at the press preview lunch) titled Final Blade is like the horn of some otherworldly creature. Wahid’s work “interrogates the forms marginalised bodies can take in all their rage and unapologetic violence—but also their weaknesses.” 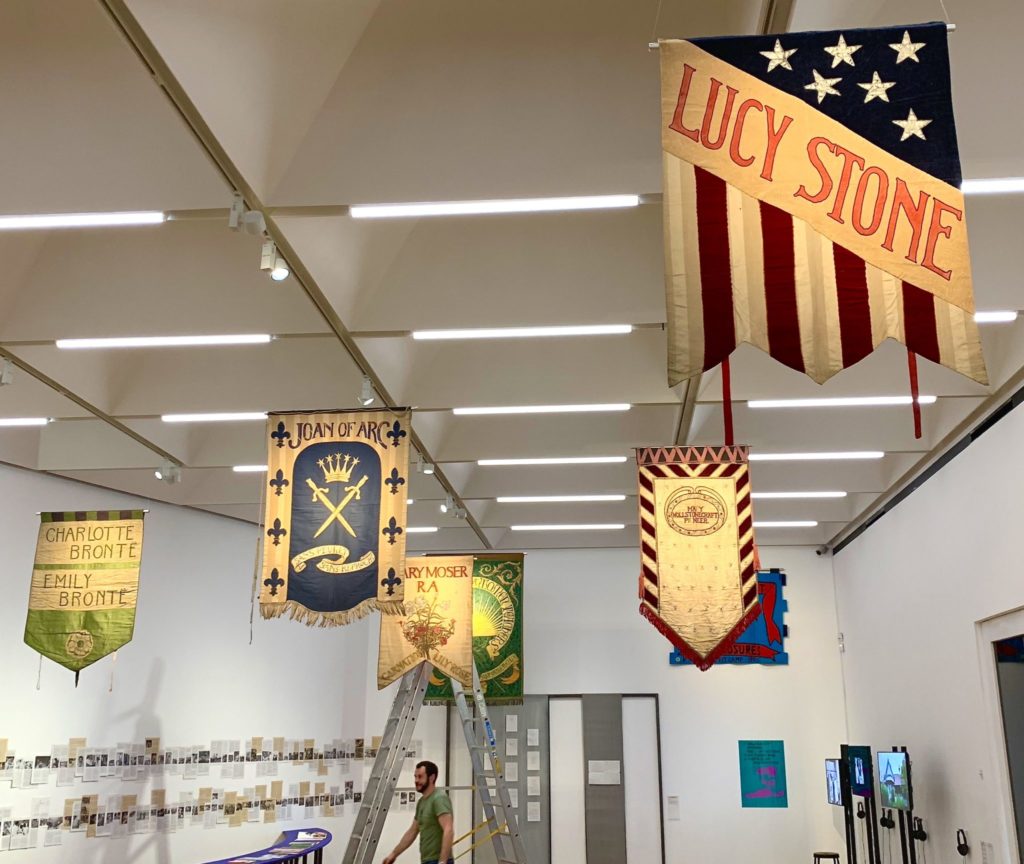 Still I Rise has a vision that goes behind contemporary art. These banners were made my Mary Lowndes (1856–1929) in the early 1900s. Lowndes, a leading figure in the Arts and Crafts movement, was an active participant in the campaign for women’s suffrage.

These banners were part of the National Union of Women’s Suffrage Societies procession on June 13, 1908. The names on the banners highlighted women in professional life and also historical figures, such as Joan of Arc….and now you know how Joan of Arc felt? Maybe. 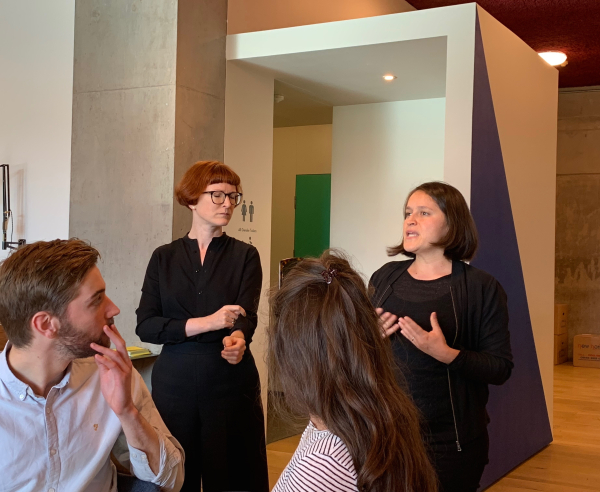 Two of the show’s curators, Rosie Cooper and Irene Aristizábal gave some opening remarks during the press preview lunch. Irene explained how the exhibition, which was two years in the making, was inspired by the Occupy Movement in Spain. 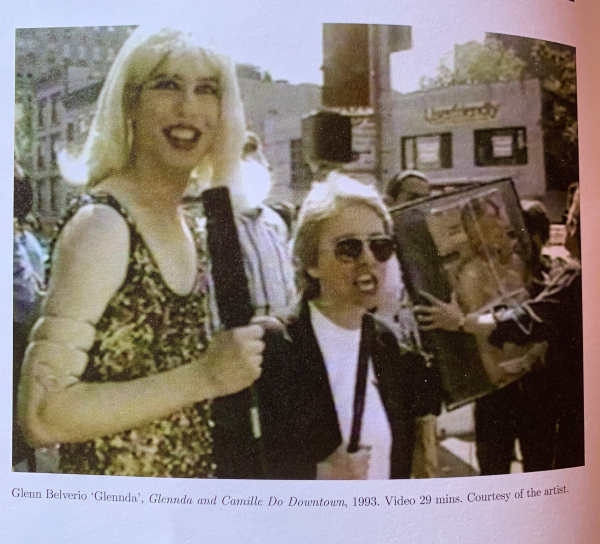 Still from my video in the exhibition catalogue. 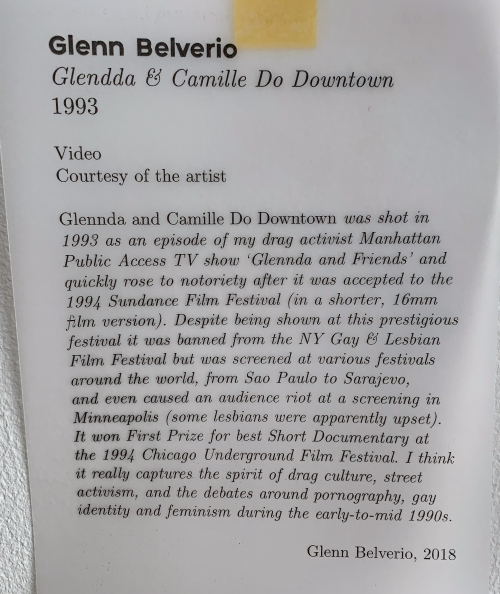 Still I Rise features the original 29-minute 1993 version of Glennda and Camille Do Downtown which aired on my public access show and played at numerous festivals. In 1994, the Sundance Film Festival accepted the work on two conditions: it needed to be shorter and it needed to be transferred to film (I literally had to sell myself to pay for the transfer expense—a story for another day!)

The version above, 16mm and 15 minutes long, was the end result. It also played at numerous festivals and opened for the premiere of Bruce LaBruce’s Super 8 1/2 at Anthology Film Archives in New York, in 1994. I’ve always loved the way this looks on film—and Camille and I love the longer version for its more natural, Warholian feel i.e. just turn on the camera and let them go on. 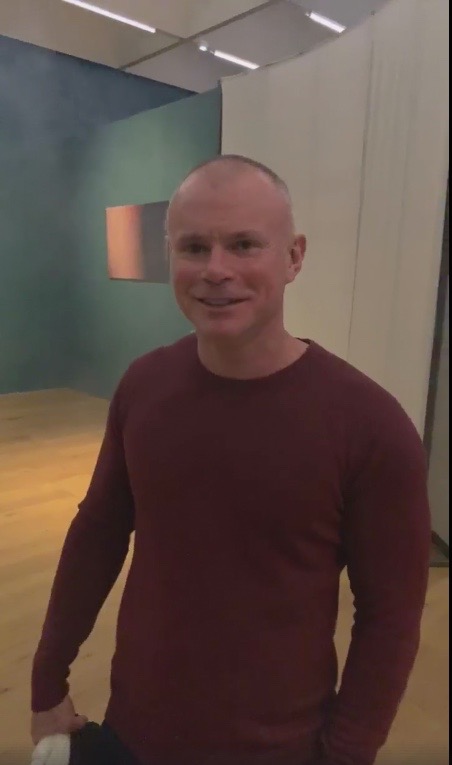 Yes, folks, that is the one-and-only Mark Simpson, author of Saint Morrissey, Anti-Gay, Male Impersonators et al, who drove down from northern England to attend the press preview and opening night party with me. We also did some sightseeing around Nottingham, including an amusing tour of 18th-century prison cells and gallows at the Justice Museum, and lots of pub visits (because the weather turned cold, rainy and miserable—in England, whaat?!—the day after the opening).

I hadn’t seen Mark since my 37th birthday dinner at Antica Pesa in Rome, in January 2016—an evening that shall live in economic infamy! 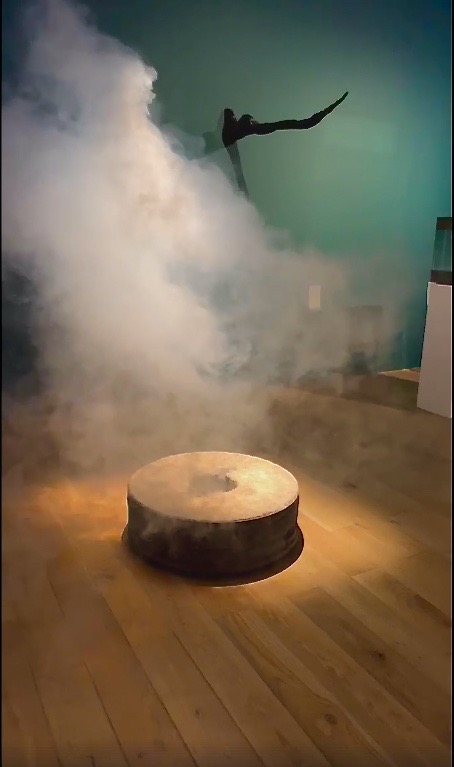 Intermittent puffs of smoke emitted from millstones—Jesse Jones’ Oracle Stones is a new work inspired by the 1970s Wages for Housework movement’s “embrace of the witch as a disruptive female being capable of effecting political change.”

The witch allows us to think about feminism beyond the idea of feminist waves, “to imagine something layered, prehistoric and continuous.”

The exhibition is informed by Nottingham’s long history of resistance movements and rioting—from the Luddites and Chartists to the Suffragettes. 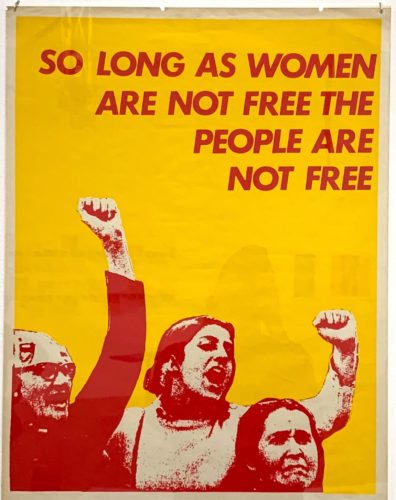 We loved, loved, loved these feminist posters from the 1970s by See Red Women’s Workshop, a London-based coalition that was active through 1990. 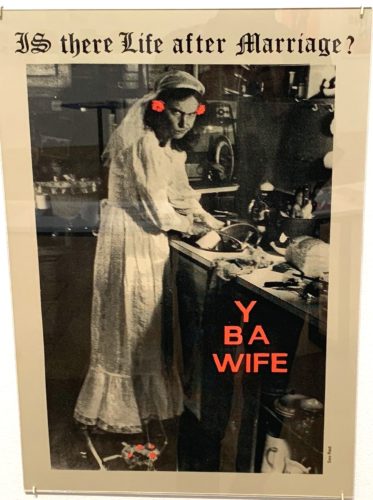 Women and gays: Just say NO to marriage! 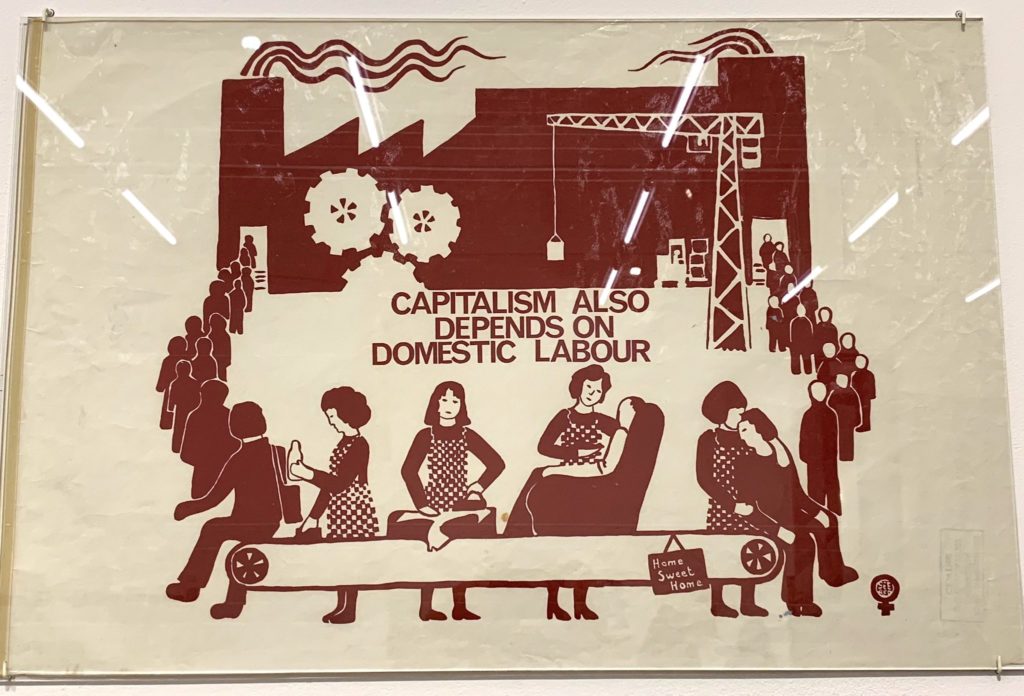 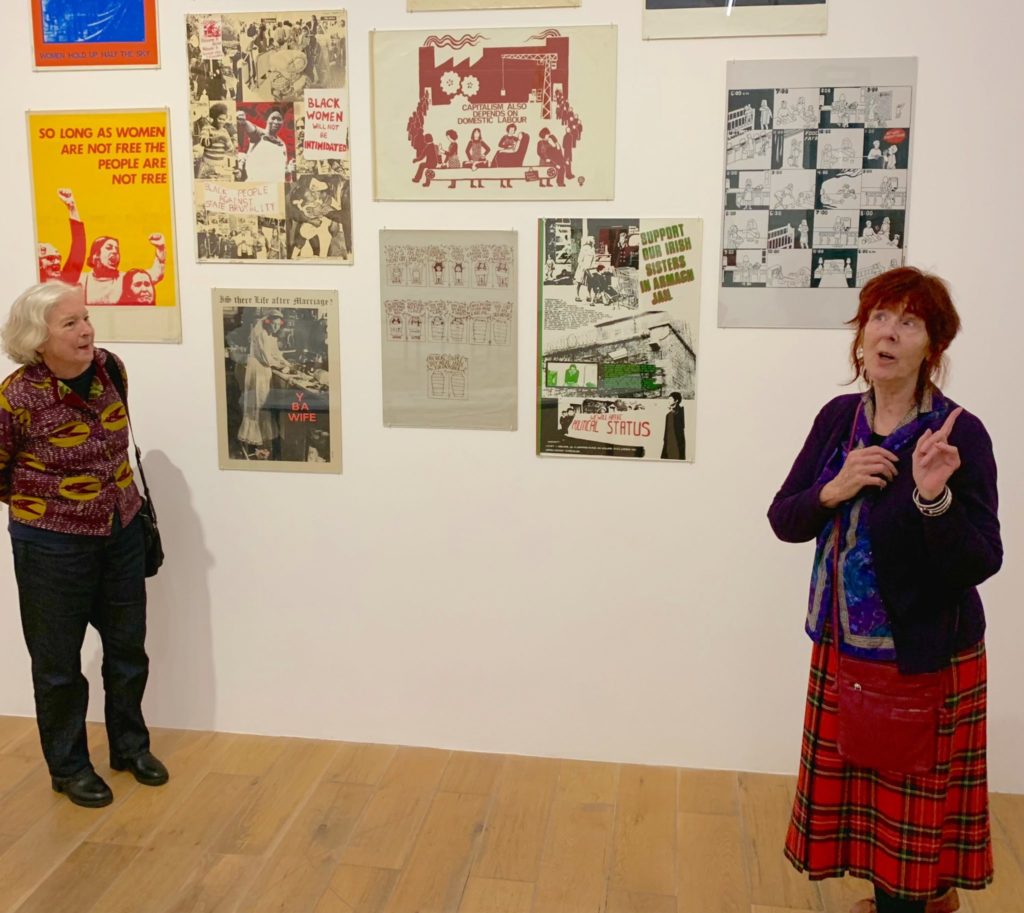 It was a delight chatting with See Red Women’s Workshop artists Pru Stevenson and Susan Mackie. 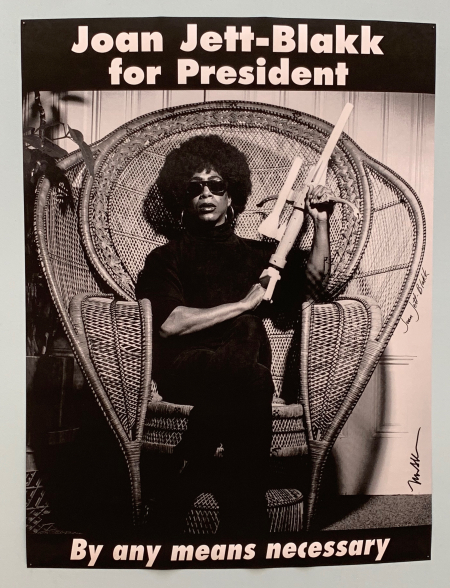 Was great seeing this again: 1992 campaign poster for drag queen Joan Jett Blakk’s run for presidency. During her campaign, Joan aka Terence Smith, stormed the floor of the Democratic National Convention at Madison Square Garden and also appeared as a co-host on my show Glennda and Friends. 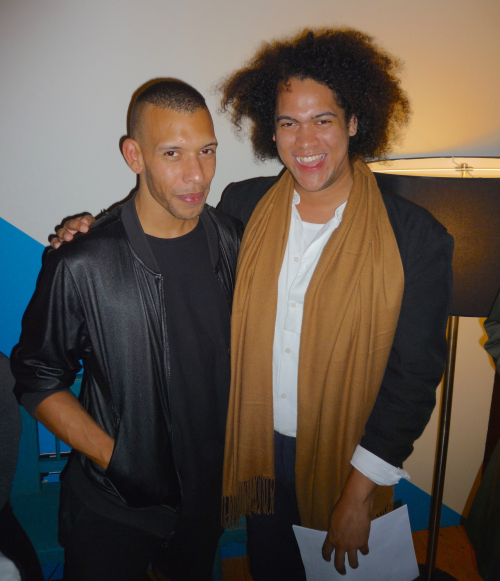 It was a delight meeting Matt Carter, who works for my London video distributor LUX, and curator Cédric Fauq at the opening night party! 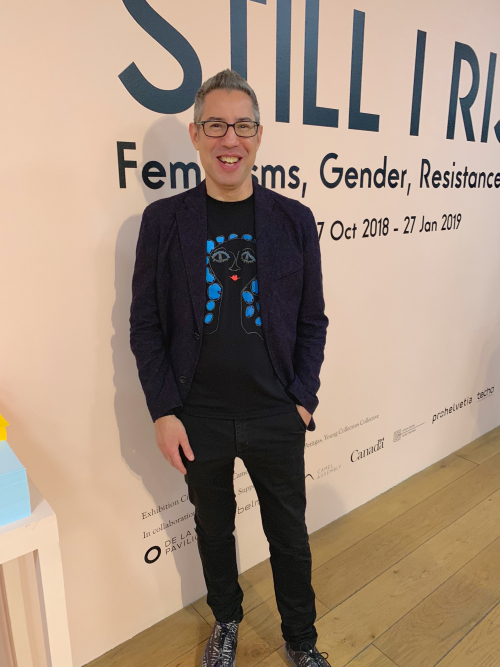 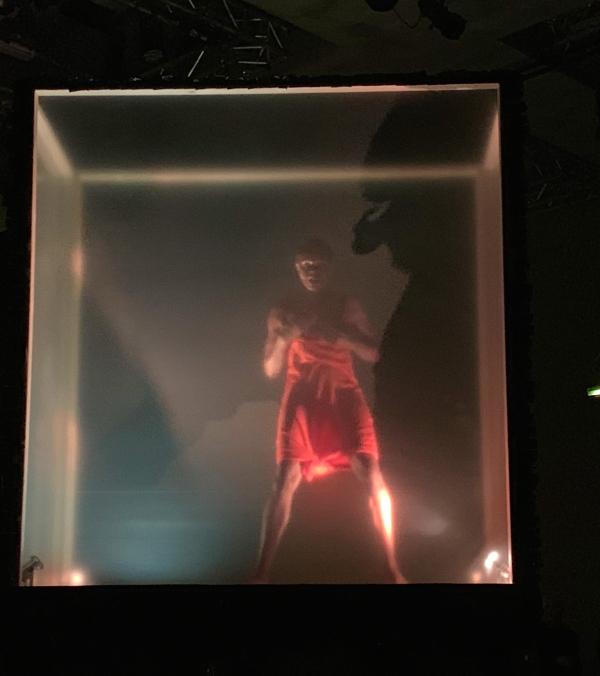 During the opening party, there was a rather challenging performance (which included video projection) by New York-based writer, choreographer and performer Okwui Okpokwasili. The piece, Poor People’s TV Room, is informed by her Nigerian heritage and two events: the 1929 Women’s War in Eastern Nigeria and the Bokom Haram kidnappings. Through movement and repetitive song, Okpokwasili manifests the embodied resistance practices of Nigerian women. 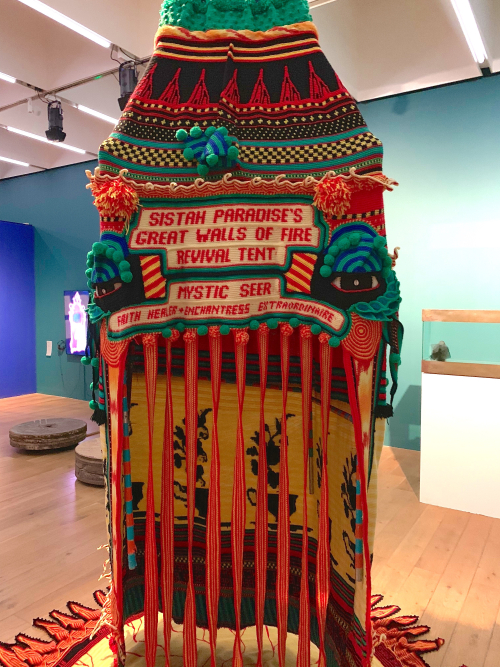 Xenobia Bailey’s Mothership 1: Sistah Paradise’s Great Wall of Fire Revival Tent (what a title!) is a crocheted shelter with eyes—the pupils are cowry shells—that are always on the watch, protecting whoever would find themselves inside. 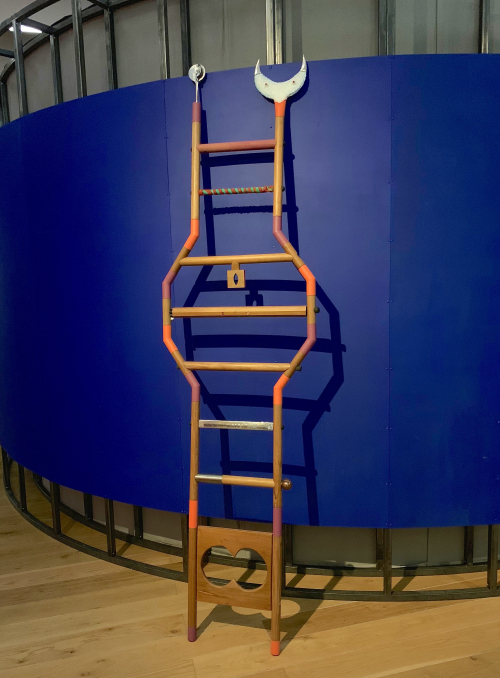 Osías Yanov’s AOOT is “a queer talisman” in the shape of a ladder created specially for this exhibition. One of the ladder’s steps is meant to invoke that assassinated Argentinian trans activist Diana Sacayán (1975–2015), who fought for the recognition of trans rights in Argentina. Another rung of the ladder is an homage to Ni Una Menos, a grassroots feminist movement that has fought for women’s right to abortion in Argentina. 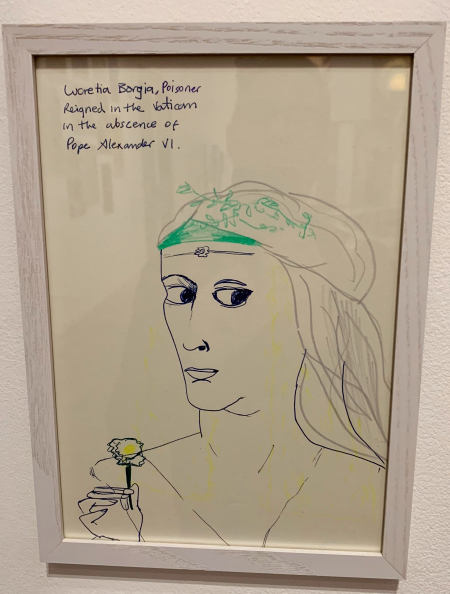 Carolina Caycedo’s Lucretia Borgia from 2002, from her Criminal Women series. We do love our female criminals (the female villains were my favorite characters in fairytales when I was a child). Here’s an explanation of the series: 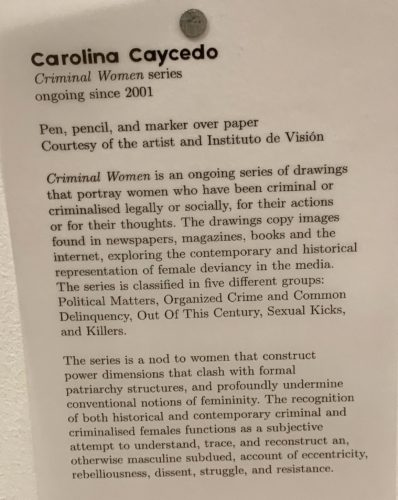 Of course, there are many, many more works to see from this show, so get your non-binary, queer ass over to Nottingham Contemporary! 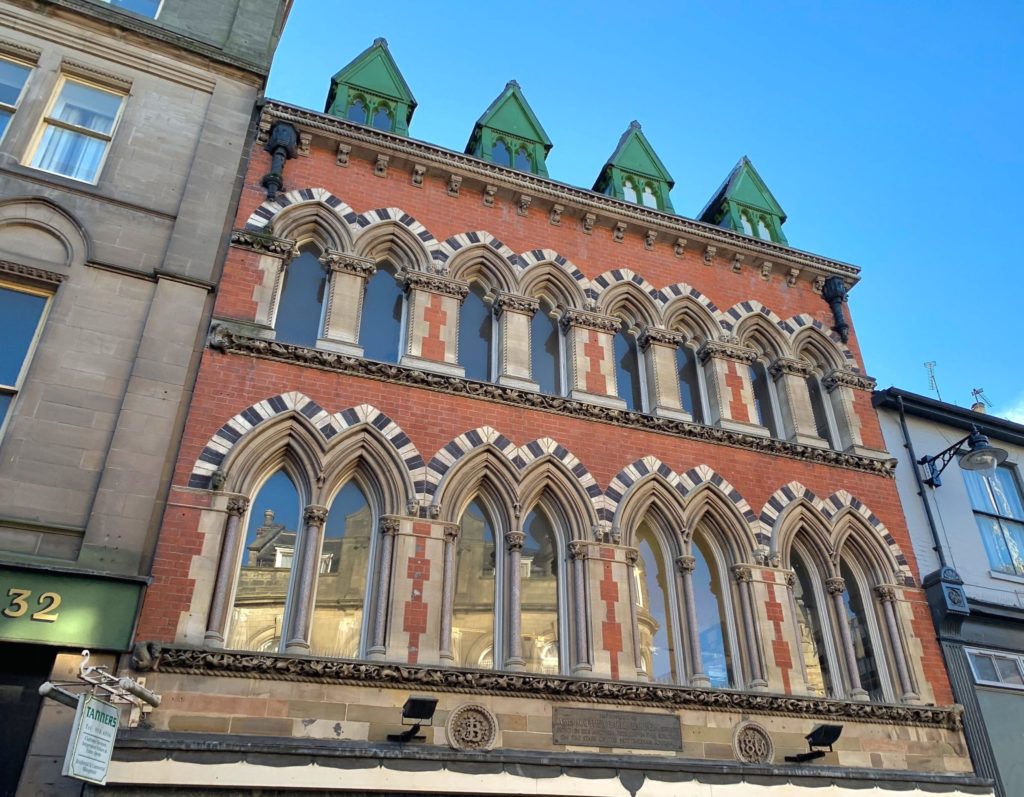 Nottingham is a beautiful city. When I arrived, the weather was positively springlike, so I wandered around in a jet-lagged daze taking in all the lovely architecture. 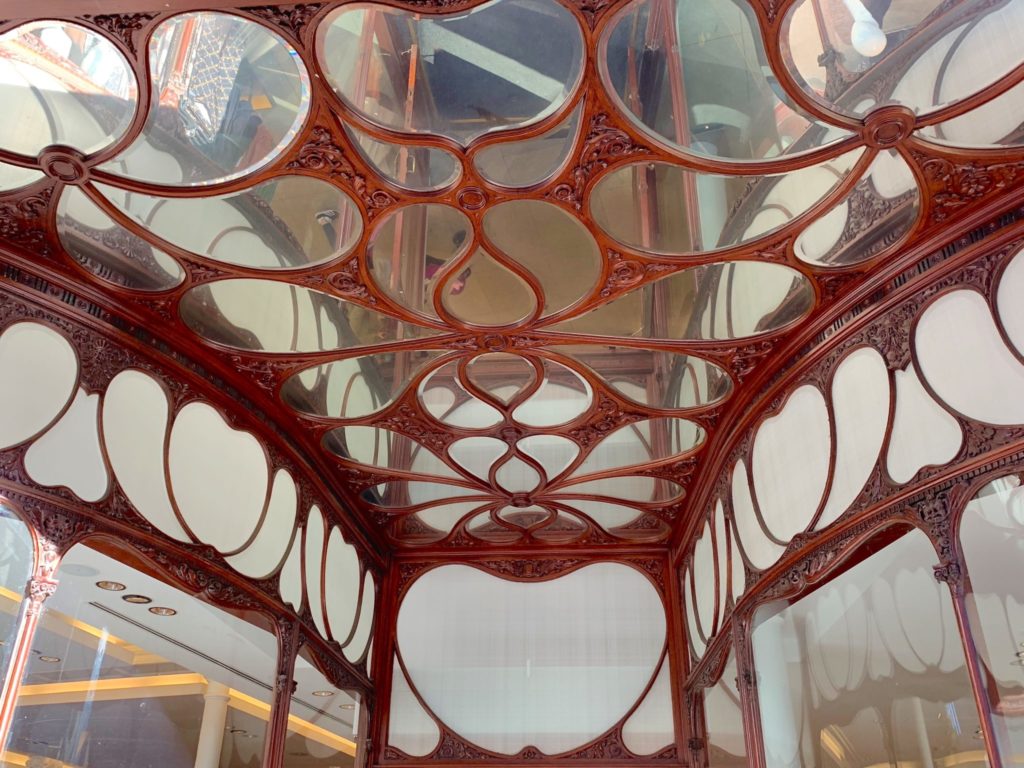 The entrance to one of Nottingham’s most famous buildings, an Art Nouveau masterpiece from the early 1900s. (The ground floor houses a Zara—groan!—and I’m afraid that this magnificent building is now officially known as The Zara Building. The architect was Albert Nelson Bromley.) 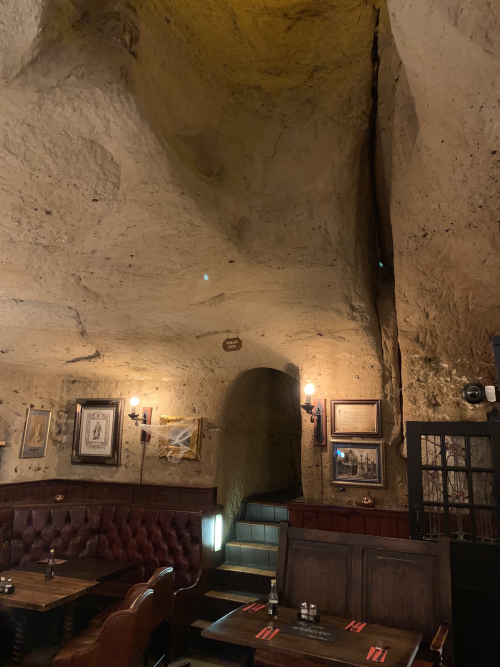 No visit to Nottingham is complete without a pint at Ye Olde Trip to Jerusalem, a pub—which purports to be England’s oldest —that’s carved into medieval caves. 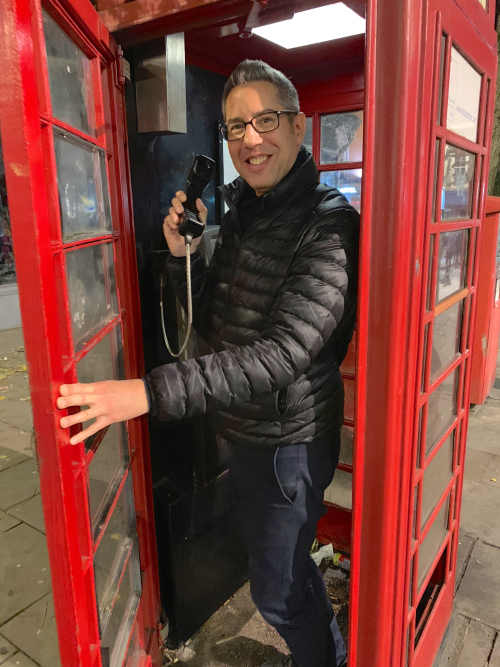 American tourist in England cliche alert! Well, really, I was surprised these things still existed. I’ll let you imagine what their principle use is now—obviously not for making calls and definitely not for changing into superhero costumes. 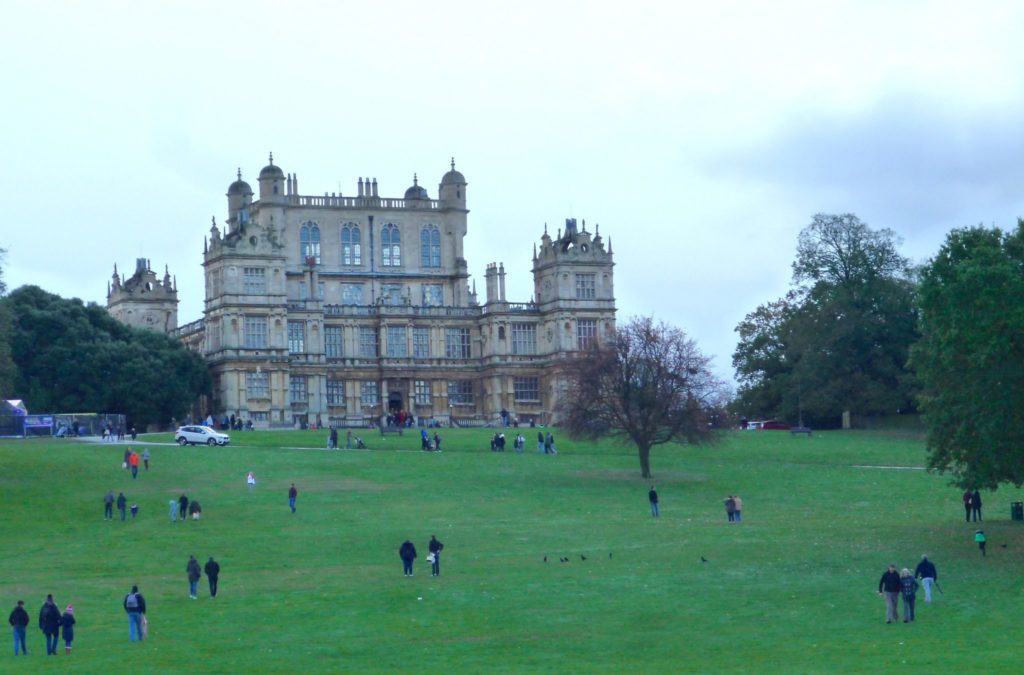 Mark Simpson drove us to Wollaton Hall and Deer Park in his very spiffy sports car—a convertible! We turned up the heat and put the top down. And then it rained on us. This late 16th-century hall has seen better days—inside is a rather tatty natural history museum—but you’ll probably recognize it as the façade of Wayne Manor in The Dark Knight Rises. (Which I have never seen. If it ain’t Adam West, I ain’t interested!) 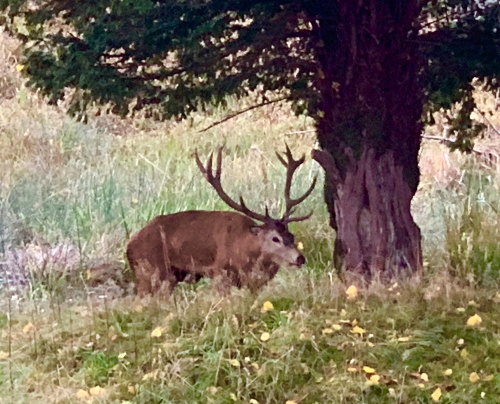 Yes, we were able to spot one of Wollaton’s legendary stags. They are hard to find, even though Wollaton stakes its claim to fame on them, so they might as well be unicorns. 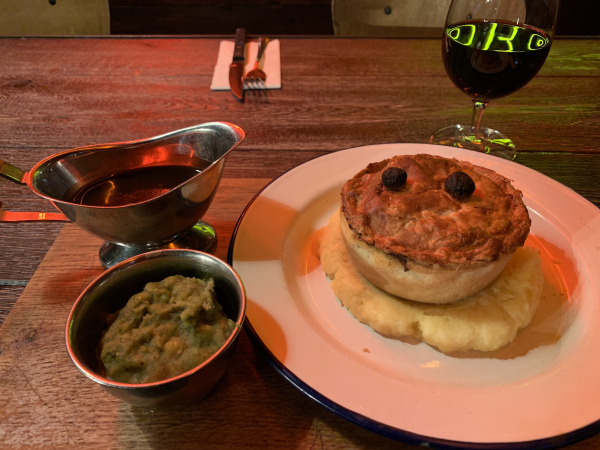 As much as I love seeing stags running free through the fields, I still can’t turn down a good venison pie. This one was pretty outstanding, with bacon, red wine and shallots mixed in with the luscious chunks of deer meat, served with mash, mushy pies and gravy. Served at Pieminister, highly recommended. (Even Mark warmed up this “hipster place” when, after expressing his intolerance for certain ingredients, the manager appeared with a clipboard and took thorough inventory of all the dishes Mark could and couldn’t eat. (Turns out he couldn’t eat any of them.) He ended up with a show-stopping, custom-made dish involving sausages, potato and halloumi – fried Greek cheese.)