It was nice to see Alexandra Moura back on the Lisbon calendar, with a seductive show powered by Portugal Fashion. Moura’s style is romantic and edgy at the same time, offering delicate touches -such as ruffles and soft volumes- mixed with unexpected asymmetrical effects and textured materials. Her work manages to be tactile and conceptual at once, which gives her a special place within Portuguese fashion. This season, there was a sense of ease and lightness in her pieces, from semi-sheer dresses inspired by broderie anglaise motifs to muted flowers printed on a parka with voluminous sleeves. The flower metaphor extended to precious jacquards used for tailoring and outerwear. Merging menswear with womenswear is one of Moura’s talents as the conversation between the two appeared rather fluid and seamless, but this collection was far from being androgynous. It had a sense of prettiness for both sexes, which felt fresh and youthful in Moura’s hands. 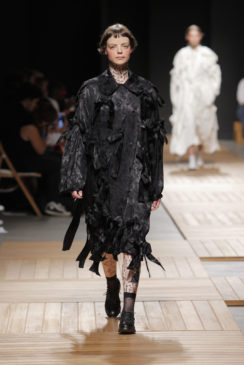 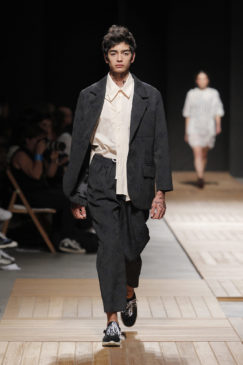