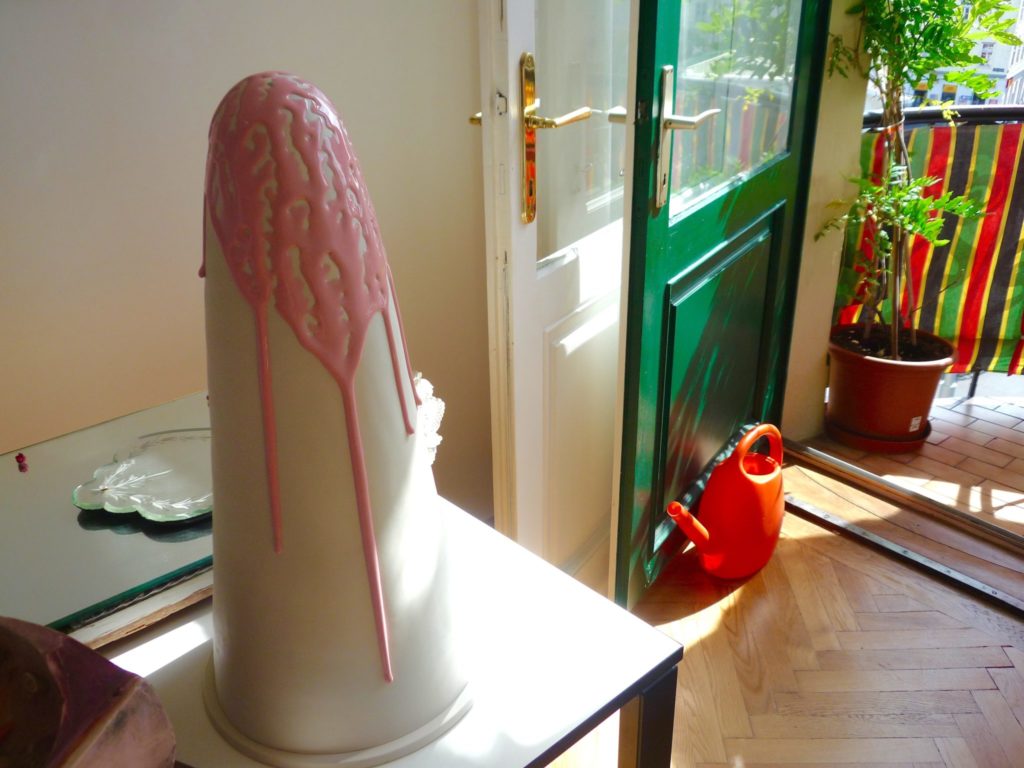 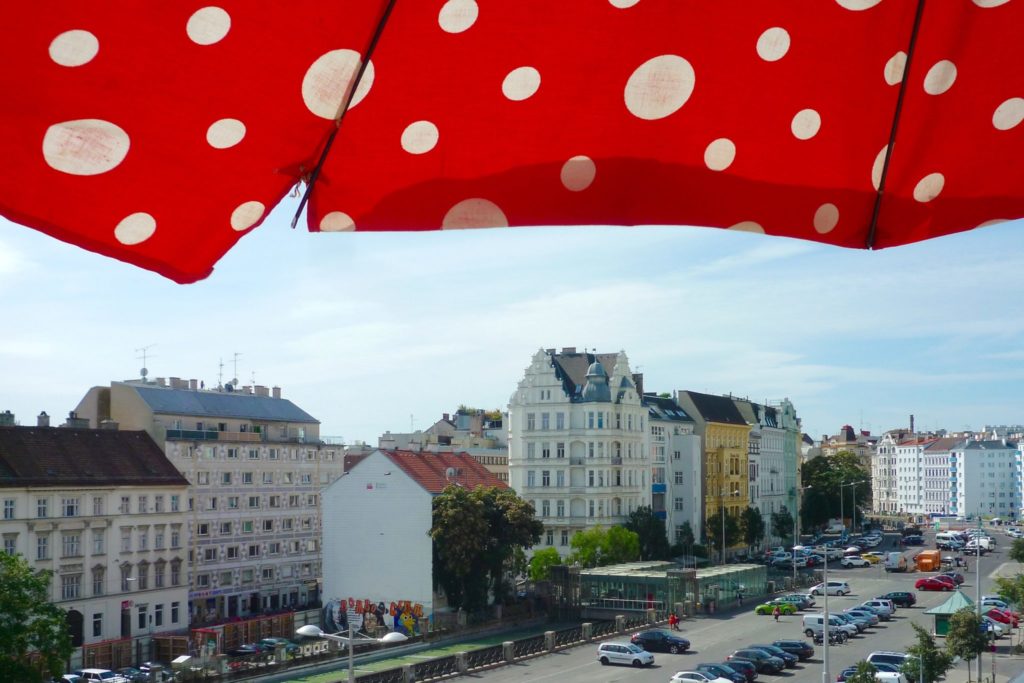 Last month during MQ Vienna Fashion Week, we were invited to an intimate, sun-drenched lunch at the home and work studio of artist Nives Widauer. Nives hails from Basel, Switzerland but has called Vienna her home for about twenty years (she used to live in the police headquarters building but recently moved to this apartment that overlooks the Naschmarkt). Nives works in a wide variety of media and her work has been shown around the world, from Zurich to Shanghai. It was an absolute delight to spend the afternoon with her and experience her artwork.

The lunch started on a high note with Champagne from Charles Heidsieck, the prestigious bubbly Maison that was founded in Reims in 1851. What better way to begin a Tuesday than with Brut Réserve from the Crayères, a series of chalk cellars dating from the 3rd century, veritable subterranean cathedrals? Afterwards, throughout the lunch and well into the afternoon, we were led through an Austrian wine journey by Werner Greigertisch, a representative from the Kracher Weinlaubenhof vineyards, located in Illmitz, Burgenland, in northeastern Austria. We were all mad for the 2016 Pinot Gris! 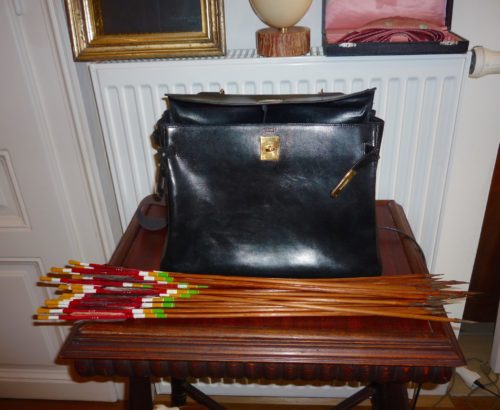 One of Nives’ artworks involves this Hermes Kelly Bag which was, if my memory serves me, accidentally left on the roof of her sister’s car and after a wild ride and fall, it was decided that it should be turned into a piece of kinetic sculpture—Chatterbag, 2017. The motorized lid of the bag opens to reveal eerie lights and a strange soundtrack in several languages, punctuated by orgasmic exclamations and giddy turns-of-phrases. As our “never-ending lunch” (its now-infamous moniker) continued, the bag carried on with its siren song which became more and more surreal as the afternoon unraveled into early evening. 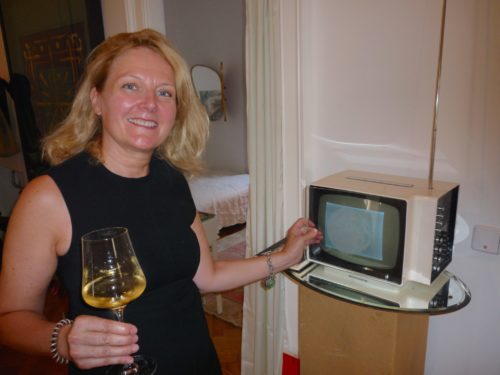 Nives showed us a work in progress about the moon landing. 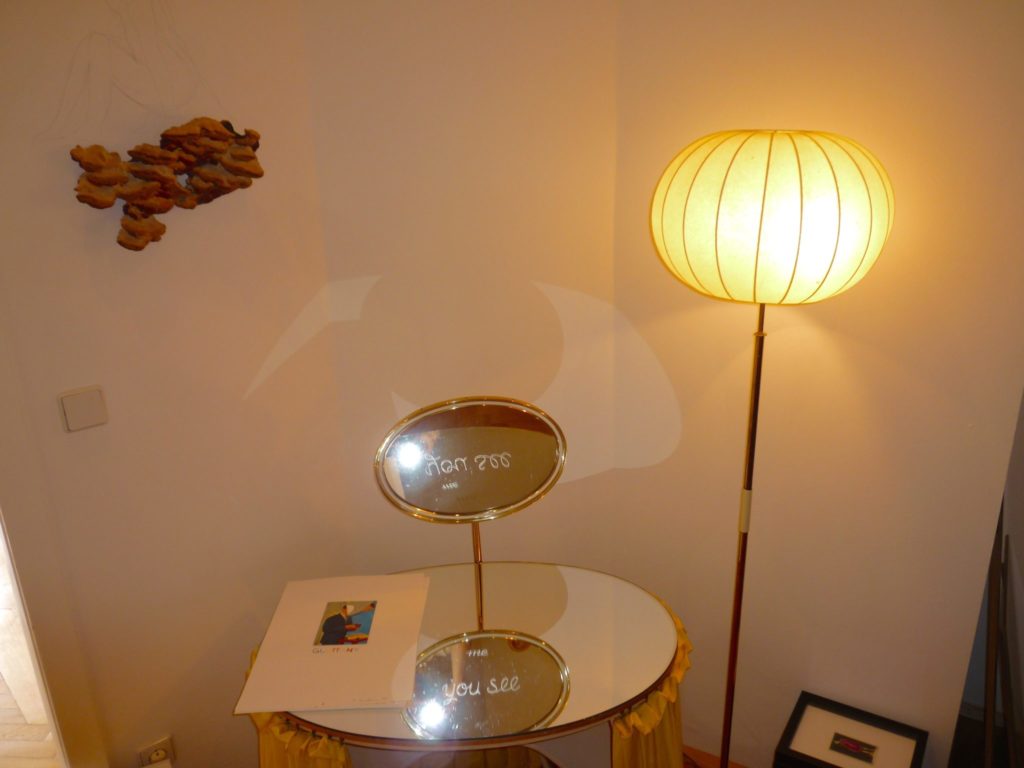 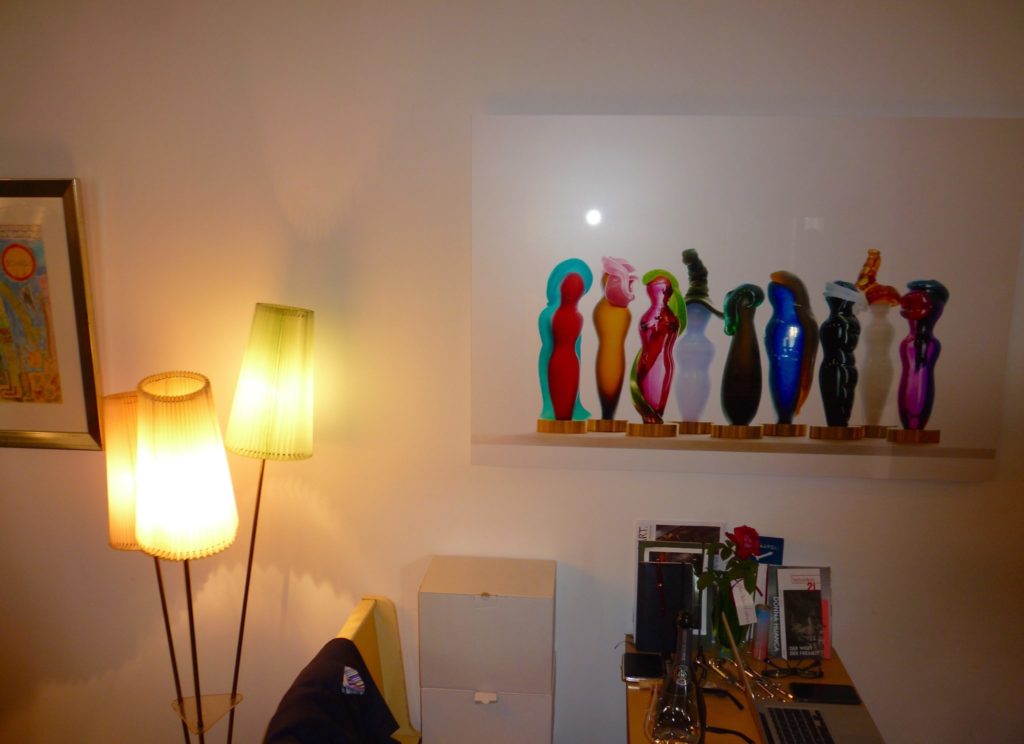 Photograph of Nives’ glass sculptures from 2017. 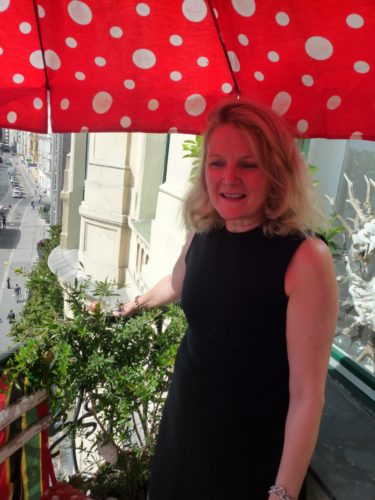 Out on the terrace, Nives showed me her pomegranate tree and mentioned her upcoming project that centers around the symbolic fruit. I told her about my keen interest in pomegranates and about my trip to Thessaloniki, Greece in 2008 where the trees grow in the city’s streets. An excerpt from my travelogue, with photo: 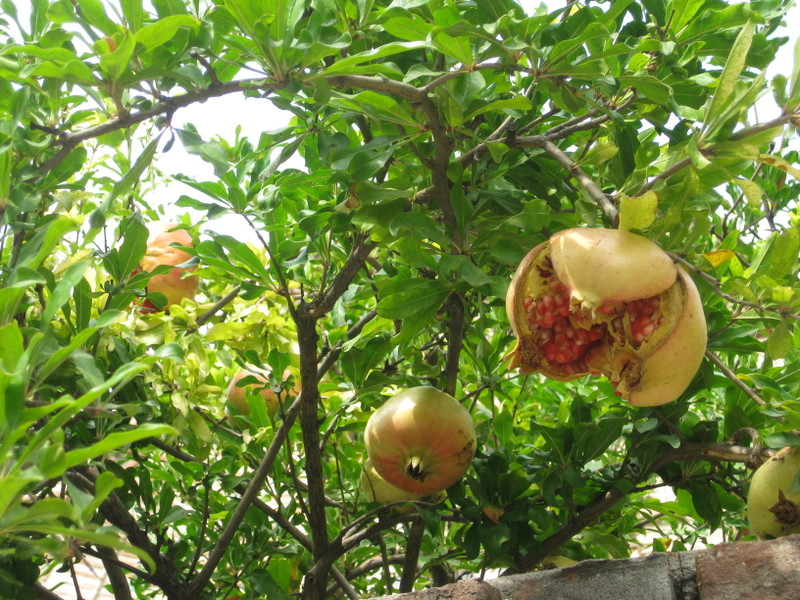 “I was delighted to see so many pomegranate trees growing around the center of the city. I took this photo of a bursting fruit on a tree in front of a small church. The pomegranate is a potent symbol in many world religions. In Christianity, a bursting pomegranate represents the fullness of Christ’s suffering and resurrection. In the Eastern Orthodox Church, the fruit’s seeds are used in kolyva, a dish prepared for memorial services, as a symbol of the sweetness of the heavenly kingdom.

In Islam, the prophet Mohammed encouraged his followers to eat pomegranates to ward off envy and hatred.” 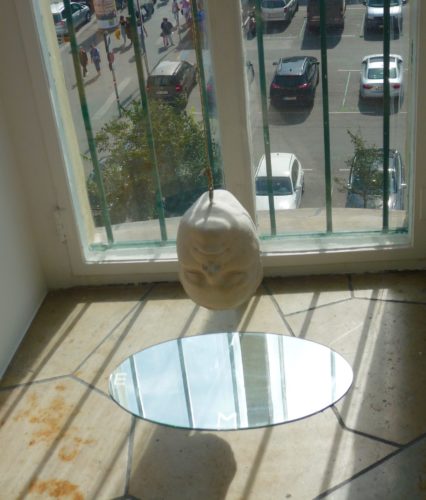 This piece was part of one of Nives’ installations and is titled life mask of cornelius obonya, mirror, 2015. 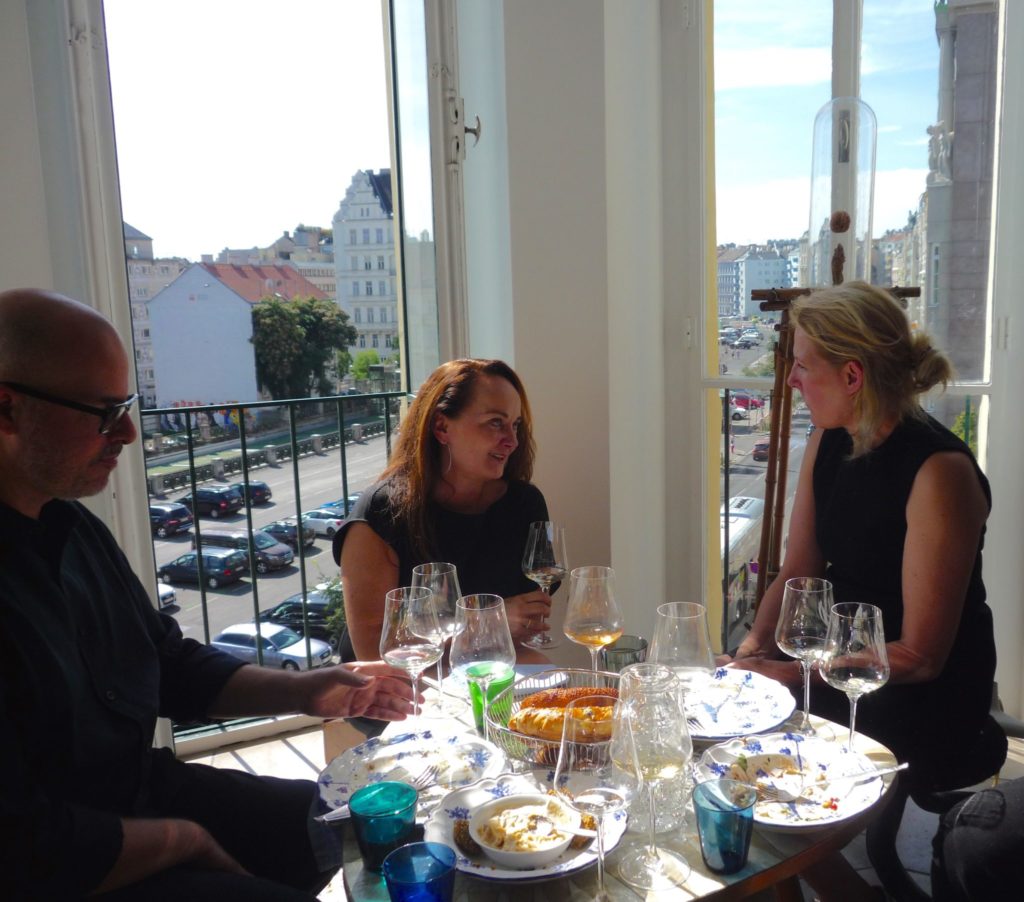 Paulo, Elisabeth and Nives on this sunny September day. 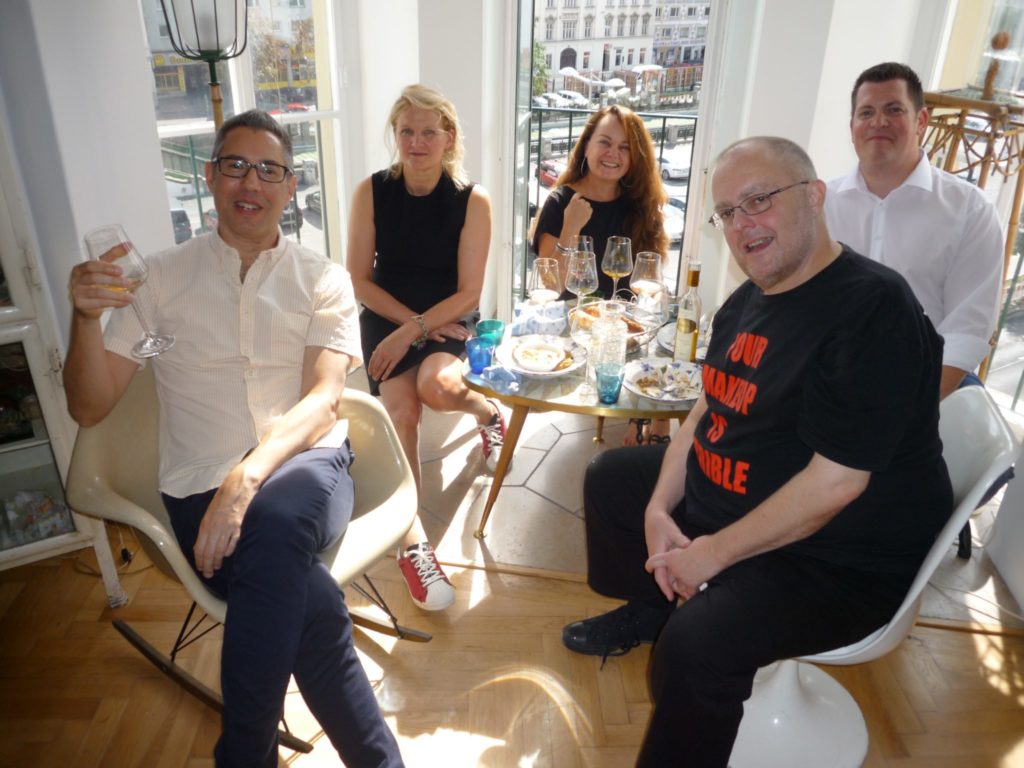 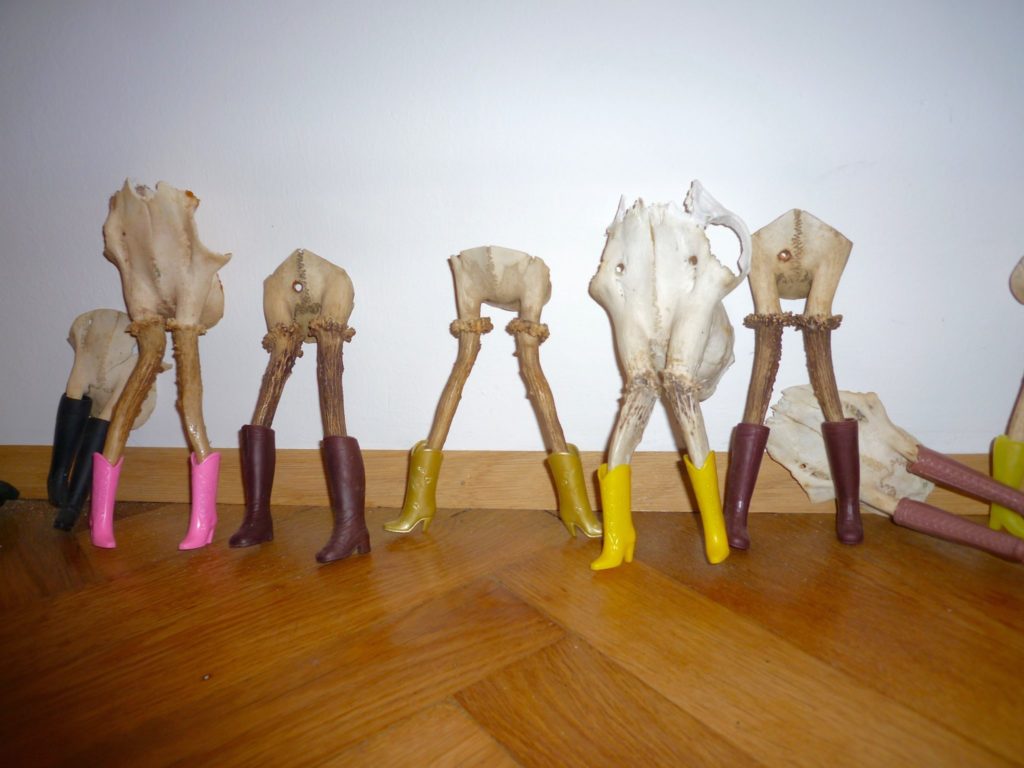 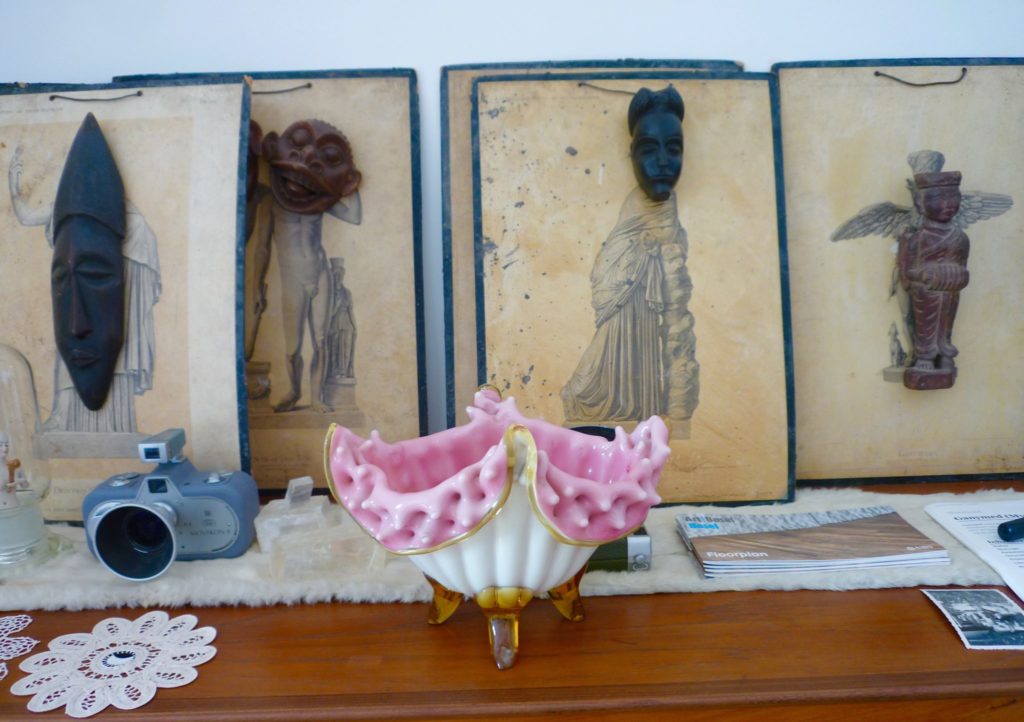 Subculture works by Nives from 2018, wooden masks on prints. 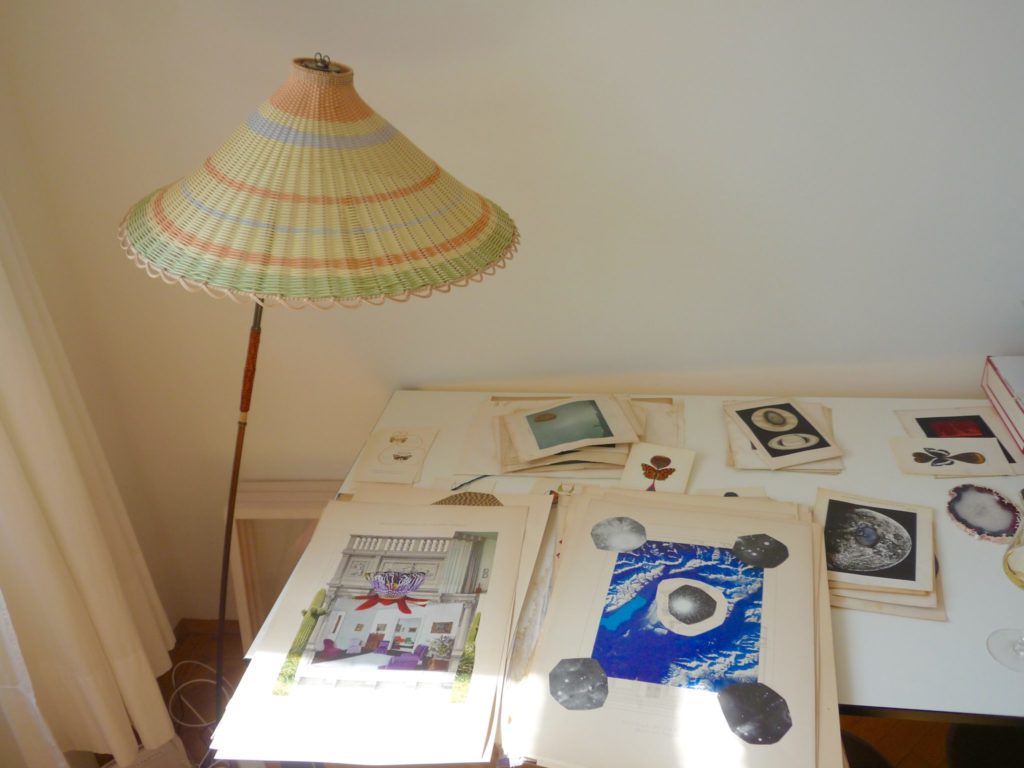 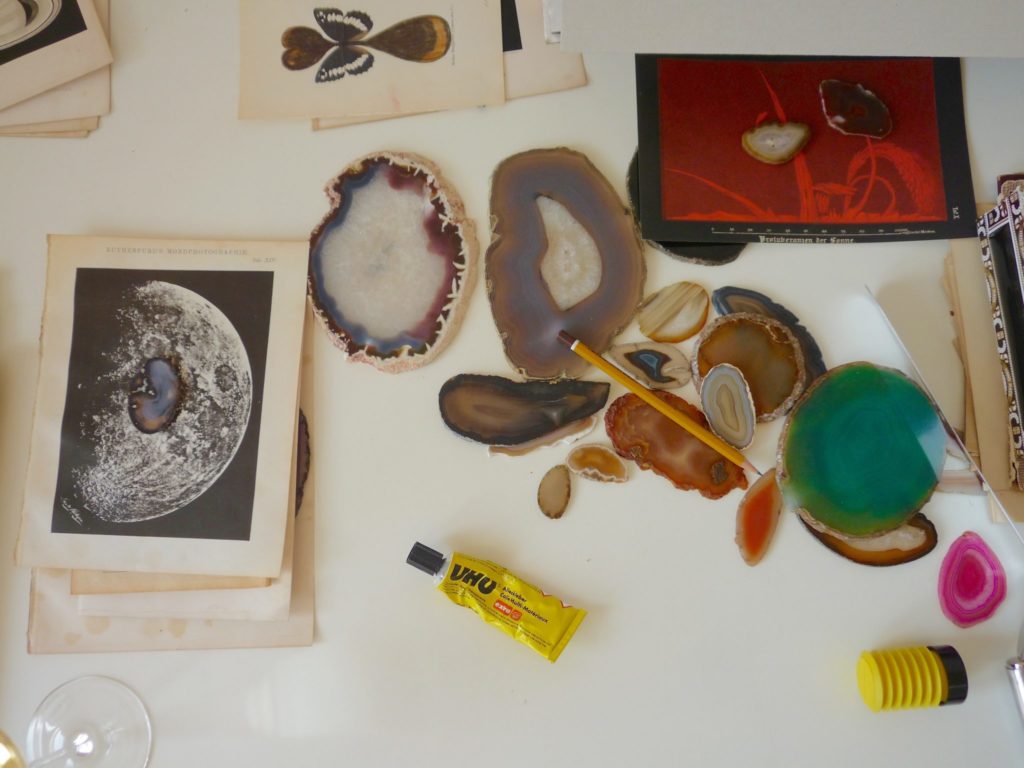 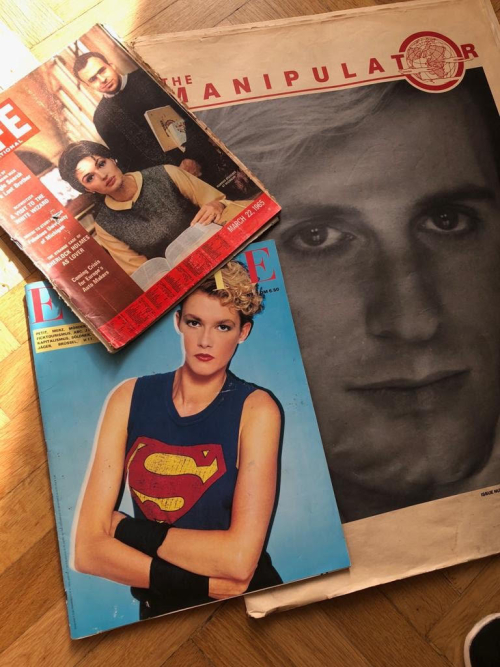 Later on in the afternoon, Nives broke out her collection of outsized ’80s magazines. Clearly influenced by Interview, some of them were actually better than the original. 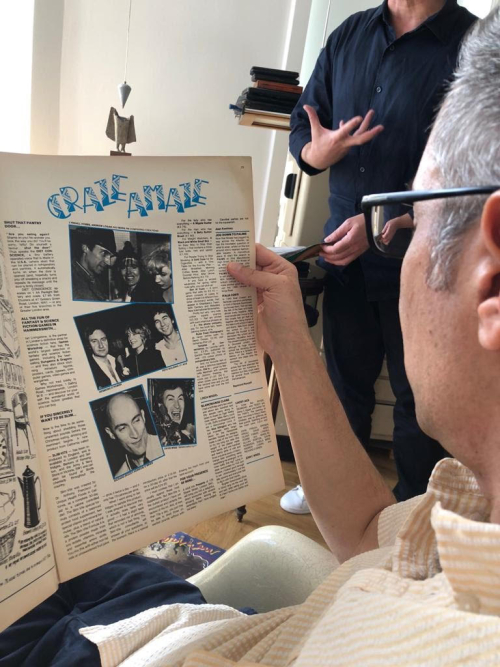 I was tres amused by this loopy gossip column from the early ’80s. 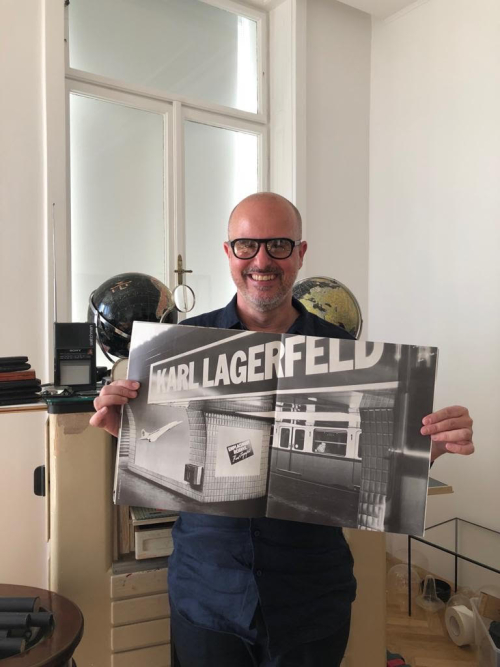 Paulo was in 7th heaven with these vintage mags. 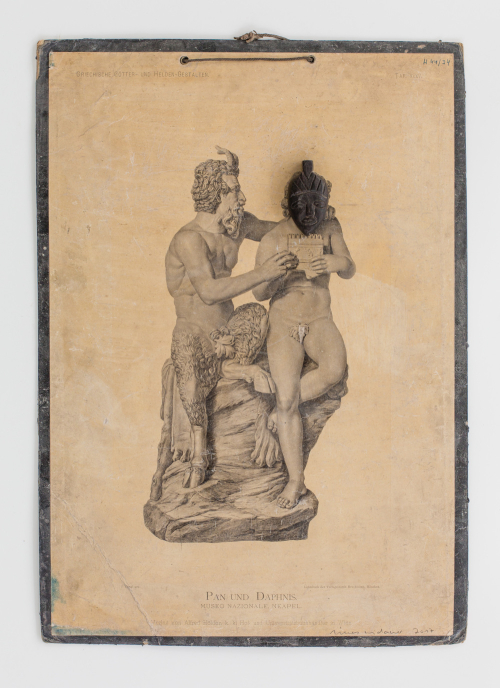 Another piece from Nives’ Subculture series. 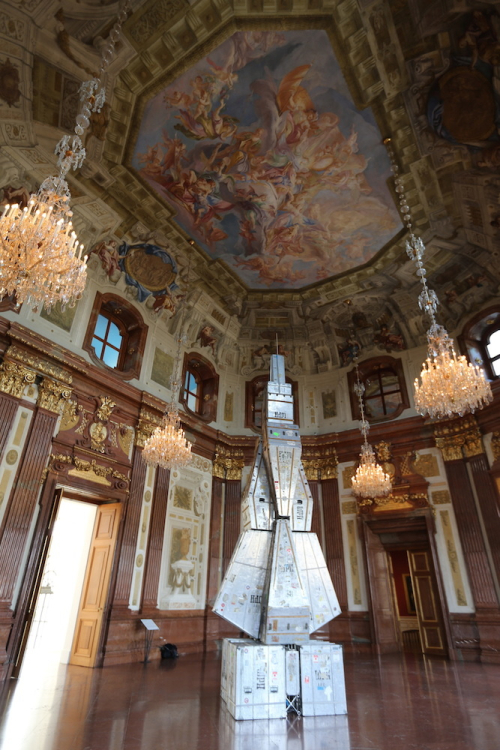 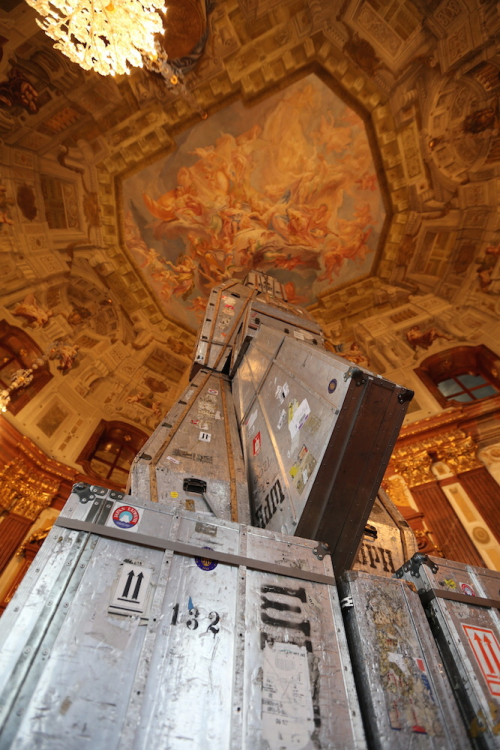 Thanks for reading. Check out Nives’ site: