In today’s complex fashion climate, the raison d’être of the graduation show seems to be going through some necessary questioning. Should aspiring designers impress their peers by showing impeccably made products or deliver a message that excites a wider audience? Should they be uncompromising or strategic? Should they provoke or flatter? And what do we expect from fashion graduates in 2018? Watching the show of La Cambre Mode[s] last weekend in Brussels did provide some answers, even though it did not have the same raw and contagious energy as in previous editions. Surprisingly enough, the most powerful statement did not come from the Final Year this time, but from Louis Appelmans, a 4th Year graduate who struck the audience with his radical approach. Entitled ‘I don’t have enough clothes to dress all of the people I’ve become’, his collection was a brilliant critique of fast fashion and its dehumanizing aspects. His models had become walking display units, with identical garments literally hanging on their bodies, their heads suffocated by H&M plastic bags. It was grotesque, smart and visceral, forcing us to reexamine our schizophrenic consumption patterns and wasteful attitudes. It will be interesting to see how his vision develops further, but the industry definitely needs more voices like his. Using poetry as a form of resistance, the clothes of Cyril Bourez are beautiful and delicate, but they’re also inclusive and emancipated. Several pieces echoed the motifs of other iconic designers -staying in the homage direction he had taken on last year- such as Gaultier’s ubiquitous pull marin or YSL’s love of fuchsia pink mixed with red. Bourez portrayed a modern and confident vision of masculinity on the runway, beyond the usual codes and binaries. Also graduating in her final year, Rebecca Szmidt explored contrasting facets of femininity, from ethnic costumes and military uniforms to striking patchworks and oversize volumes. Her gorgeous trench coat paired classic cotton with flower print panels and dramatic pleats, while her headpieces referenced the mysteries of the Tuareg people. Her key silhouettes fused European traditions with Northern Africa and the Middle East, blurring the boundaries between cultures to achieve a vibrant and multicultural picture of our current world. 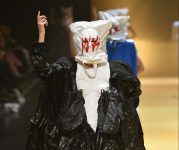 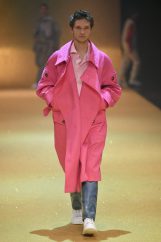 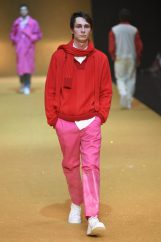 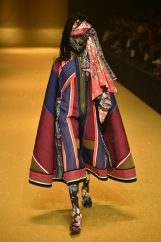 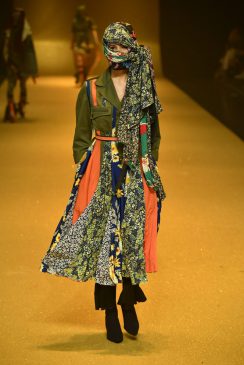 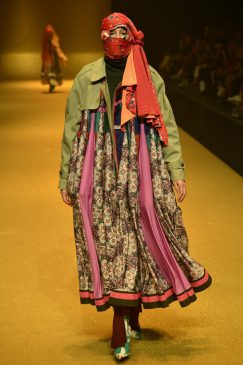